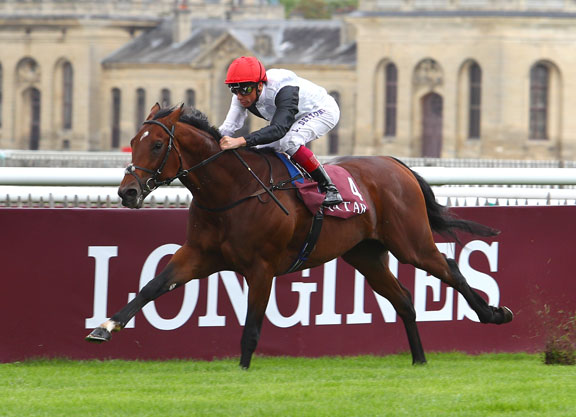 Having an enormously famous parent can be tough, as many a child with a superstar father or mother has discovered to their cost. Fortunately, though, exceptional talent does occasionally pass down the generations, as the racing world has witnessed with Galileo.

When Galileo retired to stud it was surely expecting too much that he–or any other stallion–would even come close to matching the record of his sire Sadler's Wells. This extraordinary stallion had notched up an unprecedented total of 14 sires' championships in the space of 15 years. However, Timeform considered Galileo superior to his sire as a racehorse and he is now well on his way to matching Sadler's Wells's record, having secured his ninth championship in the space of 10 years.

So what can we expect of Galileo's son Frankel? He was an even better 3-year-old than his dual Derby and King George-winning sire, with Frankel's Timeform rating of 143 being 9lb higher than Galileo's. Of course, Frankel's rating rose even higher, to an unrivalled 147 as a 4-year-old.

When I last wrote about Frankel in this column, following his first group success from Fair Eva in July last year, I explained that I understood that Frankel “is on a hiding to nothing, in that he cannot seriously be expected to sire anything better than himself. Indeed, he would do extremely well to sire anything which gets within hailing distance of his Timeform rating.”

In which case, Frankel is doing extremely well. When his son Cracksman powered seven lengths clear in the G1 QIPCO Champion S., he achieved a Timeform rating of 136, which is indeed within hailing distance of the 143 posted by Frankel at the same age. And the consensus is that Cracksman–like his sire –will continue to improve from three to four.

The Racing Post has awarded him top position among this year's European horses, just 2lb above his celebrated stablemate Enable, and equal to the top-ranked dirt horse, Arrogate. Needless to say, Enable and Cracksman are both by sons of the phenomenal Galileo, who enjoyed a four-timer at group/graded level last week, including a double from Order Of St George and the wonderfully versatile Hydrangea on British Champions Day.

Maybe I'm biased, as bloodstock consultant to Juddmonte, but hopefully Frankel has now done more than enough to silence the critics who have been sniping at him virtually from the moment his first foals were born. Fairly typical was a Racing Post piece following Fair Eva's Group 3 victory, headlined “Sire defying expectations by looking real deal”

“Expectations of what Frankel might achieve with his first 2-year-old runners were tempered by some sobering truths,” it read.

“Yes, he was the outstanding talent of the modern era on the track, but we knew that the majority of stallions fail, that his stock had received mixed reviews at auction and that many of his runners, owned by their breeders, would be in no hurry to grace a racecourse.”

Frankel did his best to quell such criticism, ending 2016 with a total of six individual group/graded winners, headed by Japan's champion filly Soul Stirring. Since then his first crop, which numbers 111 Northern Hemisphere foals, has boosted its total of black-type winners to 17, with 13–a world-class 11.7%– winning at group level. He has his first Classic in the bag, thanks to Soul Stirring in the G1 Japanese Oaks, and it's possible to argue that Cracksman was rather unlucky not to have won the G1 Irish Derby. Timeform concluded, after studying the sectional times, that “sectional analysis points to the runner-up Cracksman being the best horse in the race, even without allowance for his having to come widest of all.”

I have absolutely no desire to diminish Galileo's wonderful achievements, but it is worth pointing out that he has a lot more ammunition than Frankel, and that his fee has been considerably higher than his son's £125,000.

Galileo's 2014 crop numbers around 160 foals, compared to Frankel's 111, and the figures for their 2015 crops stand at over 130 for Galileo and 106 for Frankel. There is also a sizeable difference in the sizes of their 2016 and 2017 crops. However, Frankel's first 2-year-olds did so well that he was in much greater demand this year, so Frankel's name could be as ubiquitous as his sire's in a few years' time.

Frankel's 2015 crop has already produced three group winners in Elarqam, Nelson and Rostropovich and two daughters– Veracious and Contingent–who were recently named 'TDN Rising Stars', following impressive victories. I am personally looking forward to seeing Zarkava's daughter Zarkamiya, who has been described by trainer Alain de Royer-Dupre as “absolutely ravishing, beautiful to look at and a very good mover.”

Of course, Zarkava was an exceptional Group 1 winner, as was Elarqam's dam Attraction, and Nelson is out of an G1 Irish Oaks winner. Juddmonte's impressive debut winners Herculean and Contingent are also out of Group 1 winners.

They are just some of the Group 1 winners which Frankel earned with his brilliant achievements on the track. But don't make the mistake of thinking that a clutch of Group 1-winning mares is an automatic route to stallion success. According to the Blood-Horse's 2010 study of 65,196 American mares, Group 1-winning mares were indeed the most productive category but, even so, they produced no more than 5.77% graded stakes winners and 2.44% Grade I winners. In other words, fewer than 1 in 40 becomes a Grade I winner.

Frankel's Classic-winning daughter Soul Stirring is also out of a Group 1 winner in Stacelita, but a listed race victory represented the peak of success for Rhadegunda, the dam of Cracksman. Trained by John Gosden, this daughter of Pivotal managed only one start as a juvenile, when only seventh in an all-weather maiden at Lingfield in September. The patience paid off with Rhadegunda developing into a triple winner from 7.6 to 9 furlongs during a consistent 3-year-old campaign. Most of her starts were on ground softer than good and her listed victory came on very soft ground. Like many of Pivotal's progeny, Rhadegunda clearly wasn't inconvenienced by testing conditions and neither is Cracksman. Nor is Hydrangea, another of the Group 1 winners on British Champions Day, who also has a dam by Pivotal.

Although Rhadegunda didn't break her maiden until the August of her second season, she has the distinction of having produced Fantastic Moon, who became the only 2-year-old group winner ever sired by Dalakhani when he won the G3 Solario S. in 2012.

Cracksman was bred by Anthony Oppenheimer's Hascombe and Valiant Studs, as was Oppenheimer's Golden Horn, who was European Horse of the Year in 2015. Any breeding operation would be proud of producing two horses of this calibre in the space of only three years, but Oppenheimer has done so with a comparatively small number of broodmares.

Remarkably, these two top-class colts stem from the same female line, both having the Lorenzaccio mare Lora as their fourth dam. Lora's first foal Loralane, a winning daughter of Habitat, is the third dam of Golden Hind, while her second foal, the G1 1000 Guineas and G1 Sussex S. winner On The House, is the third dam of Cracksman.

Prior to Golden Horn, the Loralane branch was best known for the G1 Coronation S. winner Rebecca Sharp, a half-sister to the dam of Golden Horn. Cracksman is comfortably the best winner produced by the On The House branch of the family, but this female line had been producing top-notch winners for a very long time. His 10th dam is Lady Josephine, who found lasting fame as the dam of those legendary broodmares Lady Juror and Mumtaz Mahal.

It is the latter who ranks as Cracksman's ninth dam and the two are connected by Mumtaz Begum (dam of champion sire Nasrullah), Sun Princess (dam of top sire Royal Charger), Tessa Gillian (runner-up in the 1000 Guineas), Courtessa (dam of the King's Stand S. winner D'Urberville), Lora and On The House, with the last two links being the Green Desert mare St Radegund and Rhadegunda. Cracksman's fourth dam Lora was sired by Klairon's son Lorenzaccio from Courtessa, which made her a three-parts-sister to Klairessa, the Klairon mare who produced the brilliant sprinter Habibti.

Bearing in mind that the sires of Rhadegunda and St Radegund were Pivotal and Green Desert, it could be considered surprising that Cracksman has no problems with a mile and a half, even though Frankel was never asked to tackle much more than a mile and a quarter.

However, a certain amount of Galileo's stamina is emerging in some of Frankel's progeny, and it is worth adding that Galileo's progeny out of Pivotal mares are led by Hydrangea, The United States, Rhododendron, Gospel Choir and Flying The Flag, all of whom have enjoyed group success over a mile and a quarter or more. Galileo also sired the G1 Oaks winner Was from a Green Desert mare.

It was always on the cards that Frankel would sire some middle-distance stayers. He is bred to the same pattern as Teofilo, whose first crop of 3-year-olds included four winners at two miles or beyond, including the future G1 Irish St Leger winner Voleuse de Coeurs. His second produced that admirable long-distance performer Quest For More and Teofilo has even sired a two-mile listed winner from an Oasis Dream mare.

It could be relevant too that Cracksman's five generation pedigree features five lines to the GI Kentucky Derby winner Northern Dancer, with two of the lines in the fifth generation coming through Danzig.