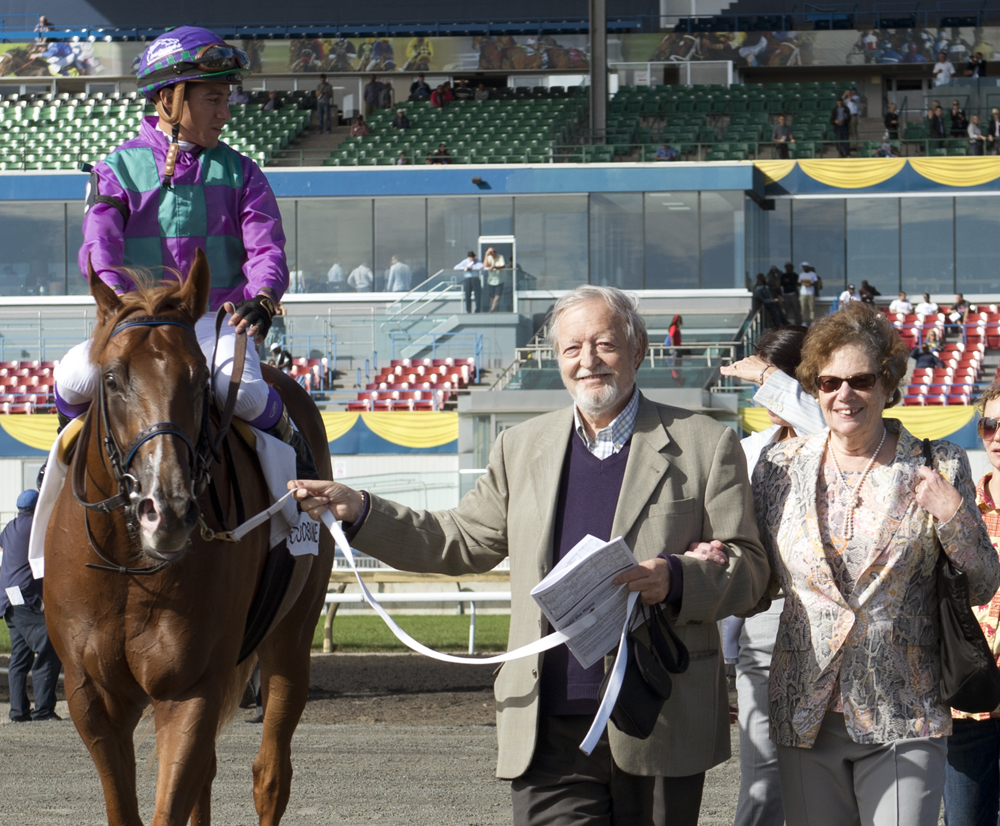 Toronto-based Ivan Dalos, who exclusively races homebreds and campaigns a stable of 32 primarily at Woodbine Racetrack, is quietly putting together a career year as an owner/breeder. Entering the final week of racing at his hometown track, Dalos has won a personal best 23 races from 104 starts in 2018, and has averaged nearly $1.2 million in earnings in each of the past five seasons.

Dalos, a construction executive whose company specializes in flooring, has bred Thoroughbreds under the banner of Tall Oaks Farm for the past four decades. He keeps a band of broodmares roughly equal in number to his racing stock split between farms in Ontario and Kentucky, and he has also developed four homebred stallions–a trio who service mares north of the border and the recently retired Ami's Flatter (Flatter), who will stand at Ocala Stud in Florida for 2019.

Dalos now has a few months to create additional space in his trophy case for the 2018 Sovereign Awards that will be announced in April. In addition to being in the mix for individual owner and breeder awards, he appears to be a lock for accepting the award for 2-year-old champion Canadian colt that is likely to be bestowed upon Avie's Flatter (Flatter), a two-time black-type winner at Woodbine whose only loss from four starts this year was a trip-troubled fourth against deep, open company in the GI Summer S.

“I'm sort of semi-retired from work right now, and this is what I love to do,” Dalos said via phone. “I'm 77 years of age, and it's time to take it a little easier. I wanted to spend more time with the horses, to be honest. So the construction business is now on my other people, and I can concentrate on my four-legged friends.”

Dalos claimed his first racehorse in the late 1970s after being introduced to racing by a business acquaintance. He undertook a “learn by doing” course of self-study after being instantly fascinated by the intricacies and history of Thoroughbred bloodlines.

“I kind of fell into the sport, and the only way I could figure it out was to read as much as I could, different breeding theories and ideas,” Dalos said. “And as I started reading about different opinions, I started forming my own ideas. The primary purpose of my breeding is to create a racehorse, the best I can. And I am constantly trying to create more and better bloodlines for my future breeding.”

It took about 20 years before Tall Oaks transformed theory into a brush with greatness: In 1994, Dalos mated a Vice Regent mare he had raced with Cryptoclearance, an affordable stallion option who was cycling out of fashion at the time. The following year, Victorious Lil produced Victory Gallop, who sold as a $25,000 KEESEP yearling before running second in both the 1998 GI Kentucky Derby and GI Preakness S. and winning the

“Over the many, many years I've found I've had pretty good luck breeding to 'oldies and goodies,'” Dalos said. “When I bred Victory Gallop, I bred to Cryptoclearance when he was sort of on his last legs as a stallion. To this day, I still believe that some of these older horses still have it.”

Dalos explained that his over-arching goal is to ensure a profitable racing operation, which in turn feeds his passion for patiently honing multi-generational bloodlines.

“Obviously, I want to create future broodmares and future stallions, but the only way you can do that is to race them and to be successful,” Dalos said. “The ones that we sell, we don't sell until they're yearlings and we see what they look like. If they are exceptionally good-looking, and the opinion is that we can get some decent dollars for them, then I'll put them in the sale. Other than that, I'll keep them and try to create my own future racehorses, broodmares and stallions.

“I used to breed almost exclusively in Kentucky until the last couple of years. I now stand three stallions in Ontario of my own,” Dalos continued. “So in order to support Amis Gizmo (Giant Gizmo), Ami's Holiday (Harlan's Holiday), and Gamble's Exchange (Exchange Rate) here at home, I've started breeding to them quite a bit. And I have Ami's Flatter standing in Florida now, so I'll be sending some mares there to support him as well. The rest of them I breed in Kentucky.”

Several of Dalos's top distaffers who hit the winner's circle during the past several seasons will be transitioning over to the breeding side of the operation as the calendar flips into 2019.

MGSW Ami's Mesa, who was second, beaten only by a nose in the 2017 GI Breeders' Cup Filly & Mare Sprint, is retired and awaiting a scheduled mating with Distorted Humor.

MGSW Gamble's Ghost (Ghostzapper), a hard-hitting sort who won 10 of 21 lifetime starts, has also been retired. Dalos has not yet finalized her mating plans.

Both of those mares are currently under the care of Nick Lotz at Briarbrooke Farm in Paris, Kentucky, where Dalos said he has enjoyed a good working relationship for 25 years.

Victorious Ami, the 2017 Sovereign Award-winning broodmare, will be bred to Tapit.

Avie's Empire (Empire Maker), the dam of presumptive 2-year-old Canadian champion colt Avie's Flatter, had a very late cover this year, so Dalos is unsure of her 2019 breeding plans. “I'm going to wait until she foals and decide at the last minute,” he said.

And Avie's Flatter himself? The colt has won Canadian-bred stakes at Woodbine on both the turf and the Tapeta all-weather surface, and is currently the early favorite for the 2019 Queen's Plate, the first jewel of the Canadian Triple Crown. But Dalos is not ruling out taking aim at the Kentucky Derby, too.

“I sent Avie's Flatter down to Florida to give him a little bit of a break,” Dalos said. “He's had four tough races, and I think it would be good for him to get a few weeks off. I'll try to go the same route that I did [in 2015] with Ami's Flatter, who came down to Florida and ended up running second in the [GII] Tampa Bay Derby and third in the [GI] Florida Derby.

“If Avie's Flatter handles the dirt–which of course, I don't know at this point–I'll try to go the same route with him and see if he's good enough to go to the Kentucky Derby,” Dalos said. “And if not, we'll go to the Queen's Plate. Once I know how he handles all three of those surfaces, we can decide what he's best suited for.”

Dalos said Avie's Flatter will rejoin trainer Josie Carroll at Palm Meadows Training Center to resume training just before Christmas. Any possible prep race prior to the Tampa Bay Derby “will be Josie's call,” he added.

Dalos said Colleen, one of his three daughters, is taking an active role in the family's Thoroughbred endeavors, and she generally represents Tall Oaks at major out-of-town races.

“She really is the only daughter who is very interested in racing and breeding,” Dalos said. “She wants to be part of this business, and I'm teaching her. Hopefully, she'll continue in my footsteps.

“I'm involved in racing and breeding because I enjoy it so much,” Dalos summed up. “And, of course, I do it because I dearly wish to create that one great racehorse that I think can be made, like a Victory Gallop that I managed to breed many, many years ago. Maybe Avie's Flatter will be the one. You never can tell. What the future brings, who knows?”