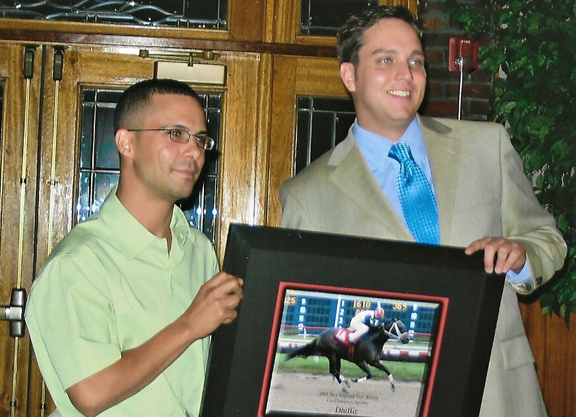 The New England racing community is mourning the loss of Patrick R. Lamberty, known for his work as a Suffolk Downs broadcast handicapper in the early 2000s, then later as the head of client management and sales for the Centennial Farms bloodstock and racing syndicate in his native Massachusetts. He was 43.

Lamberty died Dec. 16, 2020, in Pompano Beach, Florida. But it was not until Feb. 2 that news of his death began circulating among friends via an online tribute archive hosted by a cremation company that provided services for Lamberty.

No cause of death was listed on the tribute page. In the final years of his life, Lamberty fought to overcome an opioid addiction, according to friends who had extended help to him.

“P-Lam,” as he was fondly known, grew up as a multi-sport student athlete in the seacoast city of Revere, just a few furlongs from Suffolk Downs. He first became enthralled by horse racing when he and some neighborhood buddies would sneak into the track to watch the late-afternoon  races when high school classes were done for the day.

In 1997, while earning a degree in business management studies from Boston University, Lamberty won an internship to work in the press box at Suffolk Downs. He spent several summers at Monmouth Park in a similar capacity.

Lamberty's aspiring knowledge of Thoroughbred pedigrees combined with a gregarious personality made him a natural fit for earning his way onto the Suffolk Downs “Paddock Preview” broadcast team in 1999. His confident willingness to take on additional on-air talent roles led to co-hosting a nightly TV replay show, a weekly radio program, and eventually serving as a backup race caller. He later parlayed this work into a TV handicapping gig for the New York City Off-Track Betting Corporation.

In 2003, Lamberty took great pride in forming a small Suffolk-based racing stable with those same hometown buddies with whom he used to sneak into the track. Their very first acquisition ended up exceeding expectations to race at Saratoga.

Lamberty later rose through the ranks at Centennial Farms, where he was the point-person for the syndicate's clients into the early 2010s. He especially relished his roles in helping to select young horses at sales and giving insights on the progression of racing prospects.

Lamberty later moved to New Orleans and then Florida to try his hand at various bloodstock ventures and racing partnerships, and he also represented several jockeys as an agent. He was divorced with no children.

Those who knew of his deep compassion for making sure horses were always well-treated are asking that donations honoring Lamberty's memory be made to benefit a Thoroughbred welfare program of the donor's choosing.