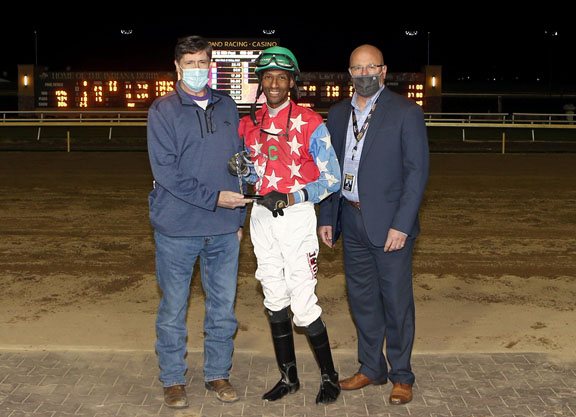 DeShawn Parker, winner of 5,821 races and more than $74 million in earnings, captured his first leading jockey title at Indiana Grand Racing & Casino when the track wrapped up its 2020 racing season Thursday. The journeyman visited the Indiana Grand winner's circle 106 times this year. Parker, who led the nation in wins in both 2010 and 2011, plans to spend the winter at Turfway Park.

“This is the best thing of the meet and of my year,” said Parker. “I had some chances the past couple of years to win [the title], but I got hurt and it just didn't work out. My agent, Jimmy [McNerney], always does a good job but he did an exceptional job this year for me, and I was able to stay healthy. I can't put into words what this means. This means so much to me.”

Trainer Genaro Garcia won 43 races and over $900,000 in purse earnings to take the training title, his fourth straight. Garcia and Steve Lewis's Southwest Racing Stable got its second leading owner title with the close of the meet. In addition, apprentice rider Joshua Morales took the Juan Saez Leading Apprentice Award, named in honor of 2014 leading apprentice Juan Saez, who was killed in a racing incident that year.