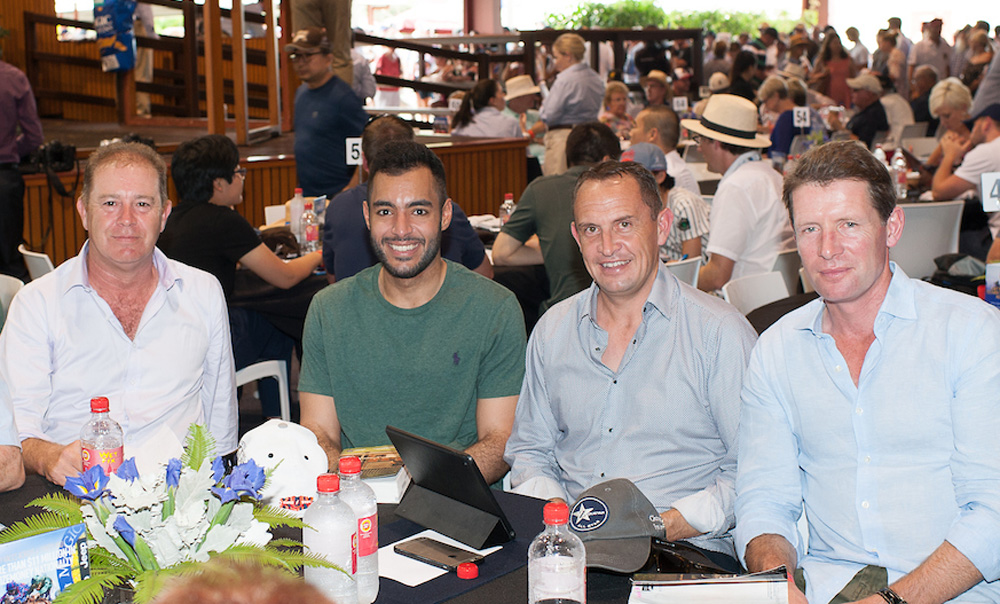 When Paret (Aus) earned 'TDN Rising Star' status with a maiden win at Canterbury in Sydney last Wednesday, he stamped himself as a potential standout from the first Southern Hemisphere crop of Harbour Watch (Ire). The Group 2-winning son of Acclamation is based at Tweenhills Farm & Stud in the UK and shuttled for two seasons to Emirates Park Stud in the Hunter Valley, and Paret is the product of a programme that Qatar Racing put together to support Harbour Watch.

“These mares were bought solely with the purpose of supporting our young stallions who we're shuttling so that we could help get them off the ground,” said Redvers. “At the moment they shift between Widden, where the majority of the ones in Australia live because they're there to support Zoustar, and Windsor Park in New Zealand where we have Charm Spirit. We're breeding there solely to trade and help get those stallions up and running. Now Zoustar looks like he doesn't need any help, he's going to fly on his own, the pressure is not so great to support him, but hopefully we'll make a bit more money out of them.”

Paret's dam, Enduja (Aus) (Encosta de Lago {Aus}), was bought by Redvers for A$300,000 in foal to Shamardal at Inglis's Australian broodmare sale in 2011. She had yet to produce a winner from three foals prior to Paret, and was moved on for A$21,000 in foal to Makfi at NZB's Mixed Bloodstock Sale this past May.

Meanwhile, Enduja's resulting Shamardal colt had been sold for NZ$270,000 at Karaka in 2013. Enduja produced a Makfi filly sold for A$15,000 at the Inglis Classic sale that was never named, and Paret was picked up by Guy Mulcaster for trainer Chris Waller for A$110,000 at the Magic Millions Gold Coast Yearling Sale last year.

This may not be the only instance that Waller and Qatar Racing are associated as a team with racecourse success; Redvers and Mulcaster signed together for four yearlings by Zoustar to go to Waller at this year's Gold Coast yearling sale, with Redvers signing on his own for two others.

“With a view to trying to do what we can to help, we went down and went into partnership with Chris Waller and some of his owners with a view to buying four or five of the very best by the stallion, and the ones we've got at the moment look very smart indeed,” Redvers said. “Sheikh Fahad is based in England and he likes to go to Australia for the Magic Millions and Easter sales, and he enjoys a bit of pinhooking and that's his passion and his interest, but he's basically based in England. What we do down there is 99% commercial, to trade and try to give the stallions we have the best possible chance of success. We're sharing the risk with Chris Waller and his owners and taking a half-share to try to support the stallion and hopefully find a good one.”

Zoustar won the G1 Golden Rose S. and G1 Coolmore Stud S., Australia's premier spring 3-year-old sprints, in 2013. He shipped to England the following May to prepare for a Royal Ascot bid, but ultimately missed that meeting after suffering a ligament injury in training. Redvers said it is possible Zoustar could shuttle to Tweenhills next year or the year after.

“That's a conversation we're having right now and have been having for quite a while, because he's had his first two runners in trials and they've both won their trials hard held,” he said. “The vibes we're getting both from the horses we've got with Chris and from other people are incredibly encouraging.”

Redvers said he has been speaking to breeders in the UK and Ireland about Zoustar, who has a very Australian pedigree, being by Northern Meteor (Aus) (Encosta de Lago {Aus}) out of a Redoute's Choice (Aus) mare.

“We've taken soundings from lots of breeders and half of them are very, very keen to use him because they're reading the TDN and the like and they're relatively up to speed on what's been going on on the other side of the world,” Redvers said. “And the other half just can't get their heads around him at all, because he's Australian, they never saw him race, he's got an Australian pedigree. Although in Australia the sireline is as hot as rocks, Northern Meteor doesn't mean a great deal to the British or Irish breeder. It may be too early to bring him up, or we may see two or three very smart maiden winners early and kick on and bring him back. We have complete confidence in the horse and the stock he's produced so far have been mesmerizing. We just haven't yet pulled the trigger as to which way to go. We don't want to bring him up and do a half-assed job of it; we want to bring him up and there be a lot of bells and whistles and this is a horse everyone knows about and needs to use. So it may be that we end up doing it for 2019, rather than 2018.”

It seems likely that Zoustar will get every chance, as the team at Tweenhills certainly know how to make a sire. Tweenhills stands Havana Gold (Ire), the current leading first-crop sire in Britain with 17 winners to his name, and second only to Dabirsim (Fr) among all first-crop sires in Europe. Redvers said the question surrounding Havana Gold now is what he will stand for next year; the G1 Prix Jean Prat winner's fee was £7,000 this year.

“We're in the middle of that conversation as to where his fee goes next year. We want to give those people that have supported the horse the best possible chance to use him again, because they're the ones at the end of the day who have got him up and running, and yet we want to be able to charge a fee that makes business sense to us as well. That conversation is ongoing and I guess we'll come to a decision sometime in October. We already have 50 or 60 mares booked for next year regardless of what price he stands at, and a lot of people are very awake to the horse. He's been a tremendous success and we're delighted.”