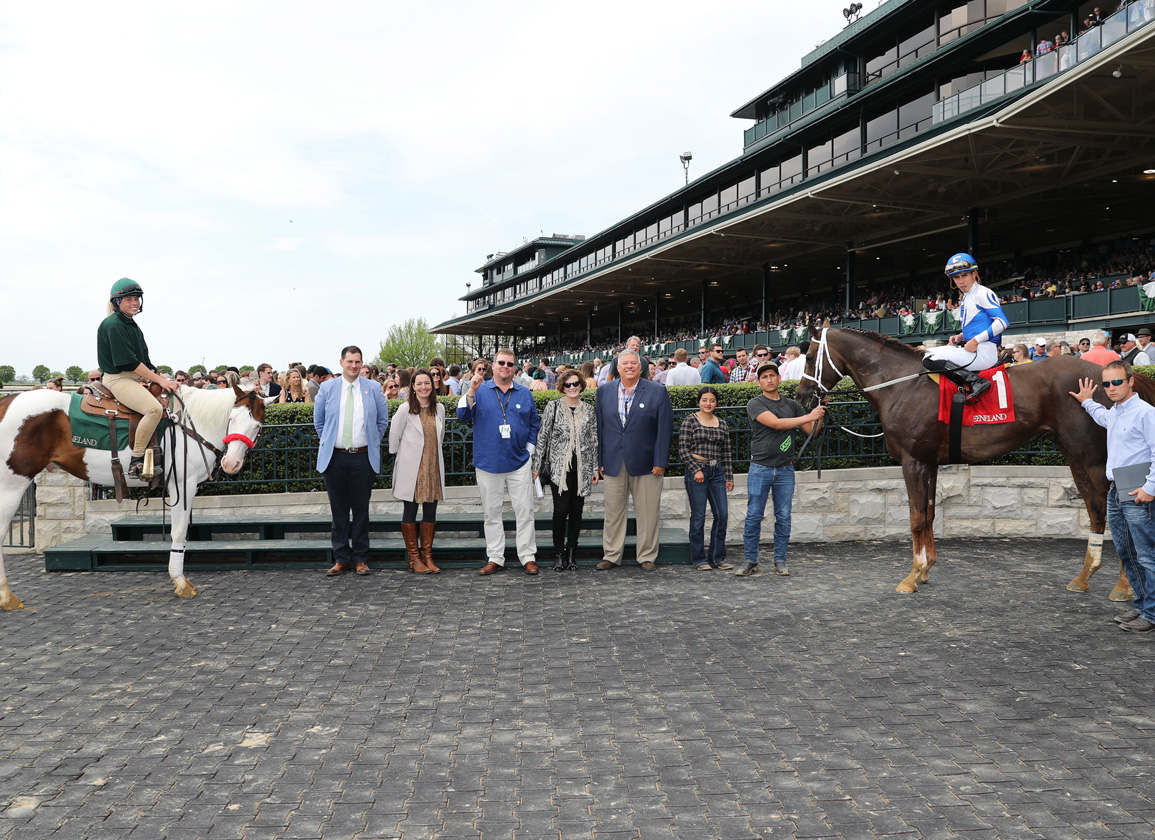 The family of Callie Witt, the exercise rider who died following an accident on Keeneland's training track Friday morning, would like to thank the racing community for the outpouring of support they have received since Callie's passing.

“We want to thank each and every person that has reached out, said prayers, took the time to think of our daughter. We are in complete shock and overwhelmed not only with the loss of our baby girl, but by the tremendous outpouring of support we have received,” said parents Tim and Jennifer in a joint statement. “We always knew Callie was special and destined for greatness from the time she was born, but we had no idea she would touch so many people.

“We will never really know why this happened or why she has left us so soon. What we do know is that she was born to ride. It ran so deep and thick in her veins. We preached to her from the time she was 18 months old to the day we lost her about the dangers of this sport and we always got the same reply: 'if I am going to die, I want to be doing what I love.' Our baby girl did just that. She was making those dreams a reality. We are so proud of her – who she was, what she was and where she was going. She will forever be in our hearts.”

Witt, 20, was an exercise rider for trainer Joe Sharp. A native of Rogers, Nebraska, she realized her passion for horses at an early age and quickly grew into an accomplished rider. She competed in barrel racing and other Western and English events since the age of three and rode Thoroughbreds since the age of 14. She was also a member of Future Farmers of America (FFA) and 4-H and won numerous awards during her time with the organizations.

In addition to her equestrian activities, Witt was a talented wrestler for North Bend Central High School, earning a bronze medal at the 2019 AAU Scholastic Duals Girls' Nationals and winning the Girls' State Wrestling Championship in Nebraska for the 113-pound weight class in 2020.

After graduating from high school with high distinction, Witt was a student of the Bluegrass Community and Technical College, where she was enrolled in the North American Racing Academy.

“Callie had such an incredible, caring heart,” said her mother, Jennifer Witt. “She always acted so tough, but had such compassion for people and animals. If she felt someone – a horse or human, or any animal – was being mistreated, she dedicated herself to being their advocate, showing courage and compassion well beyond her years.”

Known for her incredible work ethic and dedication to honing her craft, Witt rode at local Thoroughbred training farms, including WinStar Farm and Margaux Farm once morning track training concluded at Keeneland.

“Everything she did was bar none. Every time Joe [Sharp] or anyone else set the bar, she cleared it and strived to do even better,” said Tim. “Like all great athletes and equestrians, her biggest critic was herself. No matter how well she did at something, she always thought she could do it better.”

Before coming to Kentucky, she worked at Fonner Park in Nebraska, where she exercised horses in the mornings and ponied for the races in the afternoons aboard her beloved horse, Miles.

“Miles was a horse one of her teachers asked her to start under saddle. He was big, and for them he was tough, but Callie had such a way with horses and made him into a dream to ride,” said Tim. “She ended up buying him from her teacher, teaching him to pony, and within four months of ponying at the track, she had him paid off, and he's proven her intuition about him right again and again over the years. I'll admit I'm not typically fond of paint horses, but Miles is a Cadillac of a ride, and that's a testament to her training abilities.”

Keeneland remembered Witt throughout the race day, flying their flags at half-staff and holding a moment of silence to honor her memory. Sharp's racing stable won the 7th race on the card and the stable staff brought Miles into the winner's circle for the photo.

TVG's Christina Blacker and Caleb Keller discussed Witt's life and accomplishments with their audience prior to the beginning of racing that day. TVG analyst Joaquin Jamie interviewed Sharp after the race, discussing Witt's love for horses, kindness, work ethic and passion for the sport.

“We are overwhelmed with gratitude for the kindness and compassion we've received,” said Jennifer. “There are so many we want to thank; we don't know where to start. Some of them we don't even know the names of, but we felt their love. The Alpha Event Medical Team who rushed to her aid when she fell, and those who stayed in communication with us until we could travel to Kentucky. The staff of the University of Kentucky emergency room who did all they could to try to save her. So many who have helped us through our grief and the unbearable logistics that come with laying your child to rest. Joe Sharp and his team, the staff at Keeneland, her friends, colleagues, classmates, stables she rode for…the list is so long and we are so profoundly grateful for each and every gesture of support.”

In addition to parents Tim and Jennifer, Witt's family included two older siblings, Sivana and Mason, as well as her boyfriend, Trey Miller.

Private funeral services for Witt are being scheduled in Nebraska. The Witt family asks that in lieu of flowers, donations can be made in Callie Witt's name to the Callie Witt Memorial Fund at BCTC Equine, home of the North American Racing Academy; The Jockey Club's Safety Net Foundation; and/or the Blue Grass Farms Charities.