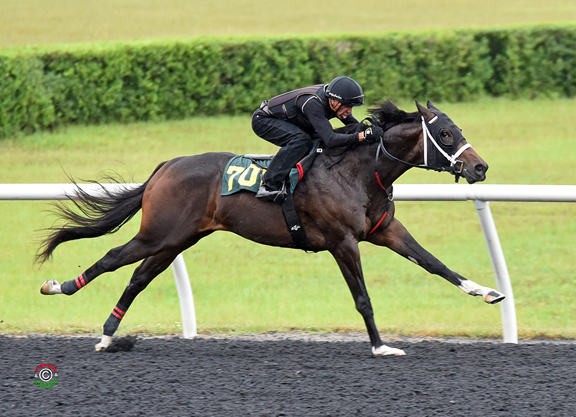 Stormy conditions delayed the start of Saturday's fourth session of the under-tack preview of the Ocala Breeders' Sales Company's June Sale of 2-Year-Olds in Training, but once the skies cleared in Central Florida, the show resumed with four horses sharing the furlong bullet time of :9 4/5 and a pair of juveniles working the co-bullet quarter-mile in :20 3/5.

A son of Dialed In (hip 701) worked the quarter-mile time of :20 3/5, equaling the fastest time of the week at the distance. Consigned by Parrish Farms, the dark bay is out of Pure Refinement (In Excess {Ire}), a half-sister to Grade I winner Pure as Gold (Stolen Gold).

“I liked his conformation and I liked the he was by Dialed In,” Parrish said of the youngster's appeal. “He was a well-built, sturdy horse.”

Parrish has already had luck selling offspring of Dialed In.

“This is my third one,” he said. “I had two fillies and they both sold well. I had a filly named Phone Chick and one named Oozle and they ran pretty well.”

Of the weather which delayed the start of Saturday's session for about an hour, Parrish said, “It was raining and there was thunder and lightning early–it was a mess. We thought they were going to cancel it and luckily they didn't because it turned out to be a nice day.”

A colt from the first crop of multiple graded stakes winner Race Day (Tapit) (hip 706) also worked the quarter mile in :20 3/5 Saturday. The juvenile is out of Queen Brianna (Unbridled's Song), a full-sister to multiple graded stakes winner Rockport Harbor. Purchased by Green River Farms for $25,000 at last year's OBS Winter Sale, he is consigned to the June sale by Hawks Nest LLC.

Four horses worked the :9 4/5 furlong bullet Saturday, bringing the total to hit that mark for the week to nine.

De Meric Sales sent out hip 653, a filly by Ghostzapper, to work the furlong in :9 4/5. The bay is out of graded stakes winner Palanka City (Carson City) and was purchased by de Meric Stables for $190,000 at last year's Keeneland September sale.

A filly by Malibu Moon (hip 780) turned in a :9 4/5 work for Michael Caraman's Race Ready Sales. Named Scoot the Moon, the dark bay is out of stakes-placed Scooter Bird (War Pass), a half-sister to graded placed Daring Reality (Include). Caraman purchased the filly for $65,000 on behalf of M.H. Walker at last year's Keeneland September sale. She RNA'd for $145,000 after working a furlong in :10 1/5 at the OBS March sale.

Hip 795, a colt by Sky Mesa, also worked the furlong in :9 4/5. Consigned by Golden Rock Thoroughbreds and named El Guaya, the bay is out of stakes placed Serious Vow (Broken Vow) and is a full-brother to stakes placed Rowdy Dylan. He was bred by H & E Ranch and RNA'd for $10,000 at last year's Fasig-Tipton July sale.

A colt from the first crop of graded winner Chitu (Henny Hughes) (hip 859) also turned in a :9 4/5 furlong work Saturday. Consigned by Vargas Sales and named Centaur's Image, the bay is out of St Ballado's Lady (Pleasantly Perfect) and was bred in Florida by Saul Rosas.

A son of More Than Ready (hip 657) turned in the week's fastest three-furlong work, covering the distance in :32 3/5 Saturday. Out of Passionate Diva (Street Cry {Ire}), a daughter of multiple graded winner Roshani (Fantastic Light), the dark bay colt is consigned by C & J Stable. He was purchased by Carlos Rivers for $10,000 at last year's Fasig-Tipton Kentucky October Yearling Sale.

The fifth and final session of the under-tack preview starts Sunday morning at 7:30 a.m. The sale will be held Wednesday through Friday with bidding beginning each day at 10 a.m.