Owner Has Big Plans For Lani 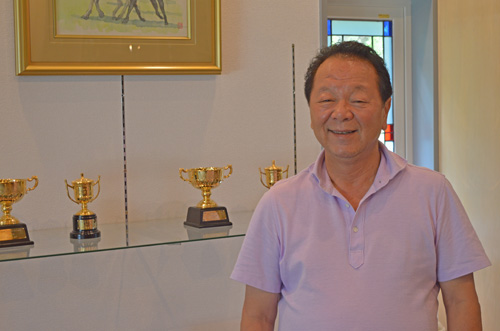 Longtime Japanese racehorse owner and breeder Koji Maeda has for many years made the use of American pedigrees a key aspect of his program, and that strategy took him all the way to the Holy Grail of U.S. racing this spring when his homebred Lani (Tapit) competed in all three Triple Crown races. Now, Maeda– an Osaka-based businessman who owns the outsourcing company Aitec–has plans to expand his interests in America. He also has good news for Lani's U.S. fan base: they haven't seen the last of the cantankerous colt.

Speaking at his North Hills Farm in Niikappu on the island of Hokkaido last week the day after buying five foals at the JRHA Select Sale, Maeda explained that Lani–winner of the G2 UAE Derby in Dubai before finishing ninth in the GI Kentucky Derby, fifth in the GI Preakness S. and third in the GI Belmont S.–is currently in the midst of a 90-day quarantine period upon returning to Japan. The grey–who became an unlikely star during the Triple Crown due to his antics, which included sometimes refusing to train–is serving his quarantine at Maeda's expansive Daisen Hills training centre on the Japanese mainland. According to Maeda, Lani is already back in work and the owner described the colt as being “in very good form.”

Lani's key target for the second half of the year will be Chukyo's G1 Champions Cup (formerly the Japan Cup Dirt) over 1800 metres on the dirt Dec. 4, and he may have one prep race for that event. Maeda said he plans to send Lani packing once again in 2017: his early-season target will be the G1 Dubai World Cup at the scene of his UAE Derby score at the end of March, with a possible prep at Meydan. But the one Maeda really wants is next year's GI Breeders' Cup Classic at Del Mar.

“After Dubai he will come back to Japan, but he will go to America for his prep race for the Breeders' Cup Classic,” he explained.

Maeda, who attended this year's Derby and Belmont, said he thought Lani's Triple Crown soujourn laid a good foundation for the Breeders' Cup.

“Lani has a very big stride and the tracks were a bit smaller, but I think Lani had a very good experience to prepare for next year's Breeders' Cup,” he said. “He was getting used to the style of racing.” He added, “Lani has an interesting character. He has a little bit of a temperament issue, but he's improving.”

Maeda also revealed that Lani's dam, Group 1 winner Heavenly Romance (Jpn) (Sunday Silence {Jpn}), is back in foal to Tapit and is carrying a colt. Heavenly Romance is one of five mares boarded by Maeda at Lane's End, and the owner's business plan has thus far been to ship the resulting foals to Japan to begin their racing careers, as he did with Lani and his 2-year-old unraced half-sister Kiele (Distorted Humor). Lani's younger brother, however, will be put into training with an American trainer, and Maeda said he intends to grow his American broodmare band, sending more of his daughters of Sunday Silence and his son, Deep Impact, to the U.S. for outcross opportunities. In another effort to diversify his bloodstock, Maeda regularly buys yearlings fillies in America and sends them to Japan to race before they join his breeding program there. His Japanese broodmare band currently includes the stakes-producing Asian Meteor (Unbridled), a full-sister to Unbridled's Song bought by Maeda as a Keeneland September yearling for $275,000. Maeda also has yearling fillies from the single Japanese crop of Hard Spun, and the repatriated Empire Maker.

Lani's younger brother will not be Maeda's first U.S.-trained horse. He campaigned homebred Sunday Break (Jpn) (Forty Niner) with trainer Neil Drysdale and won the 2002 GII Peter Pan S. and finished third in the Belmont and GI Wood Memorial. Sunday Break is out of Catequil (Storm Cat), an American-bred mare who became a star producer for Maeda, also providing him with two Japanese Classic winners: G1 Oka Sho and G1 QEII Commemorative Cup winner Phalaenopsis (Jpn) (Brian's Time) and 2013 G1 Tokyo Yushun (Japanese Derby) winner Kizuna (Jpn) (Deep Impact {Jpn}), who is now at stud at Shadai Stallion Station. Kizuna was, in fact, the first of back-to-back homebred Japanese Derby winners for Maeda, with One and Only (Jpn) (Heart's Cry {Jpn}) bringing up the double in 2014. Another familiar name to race in the Maeda colours is Transcend (Jpn) (Wild Rush), a triple Group 1 winner on the dirt who was famously second to compatriot Victoire Pisa (Jpn) (Neo Universe {Jpn}) in the 2011 G1 Dubai World Cup just weeks after Japan had suffered devastation from one of the world's worst-ever earthquakes and tsunamis.

All of this more recent success for Maeda is the product of strong foundations built starting 40 years ago, when the entrepreneur first decided he wanted to enter racehorse ownership.

“About 40 years ago, a friend of mine owned a racehorse,” he said, explaining how he caught the bug. “I went to visit my friend's farm and it was very beautiful, so I decided I wanted to build my own.”

Today, Maeda owns about 400 horses in total, with 180 of those being horses-in-training on the Japan Racing Association circuit. He owns about 80 broodmares and roughly 50 foals are produced each year at North Hills, which measures 180 hectares including areas under development, such as the new yearling division.

“For me, horse racing is a half-business, half-hobby,” Maeda said with a smile.

Maeda was quick to credit Lexington-based equine nutritionist Steve Jackson for his hand in the success of North Hills. He noted that Jackson visits him in Japan about four times a year.

“He has come to Japan many, many times,” Maeda said. “He is a very important person for me. I've known him for about 21 years and he's given me very good advice, and everything in the program has improved from his advice.”

Looking to the future, Maeda said he hopes to stand Lani in the U.S. when he retires to stud. He said he has had interest from American entities to buy the colt, but he turned them down, preferring to keep the colt in his own colours. “I have a lot of money so I said, no thank you,” Maeda laughed.

Thanks to Maeda's sporting nature, it appears fans across the world will have many more opportunities to enjoy Lani's character, and perhaps a few more big-race wins, in the foreseeable future.