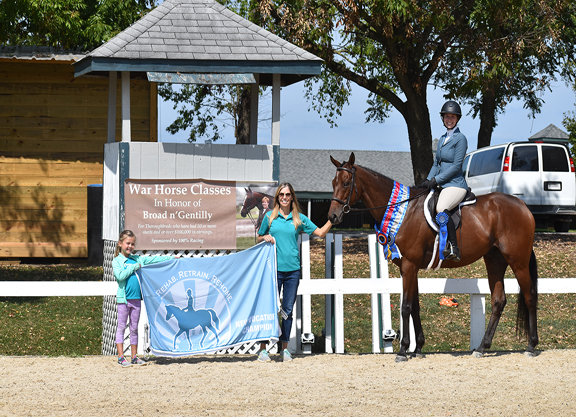 More than 450 Thoroughbreds traveled from 26 states to compete in the fifth annual New Vocations All-Thoroughbred Charity Horse Show, held Sept. 6-8 in conjunction with The Jockey Club's Thoroughbred Incentive Program (T.I.P.) at the Kentucky Horse Park near Lexington. It was the largest number of competitors to date for the show, which coincided with nearly $120,000 in sponsorships raised, the highest amount the show has raised to date. The funds go to New Vocations, which is the largest racehorse adoption charity in the country, and will be used to directly support its efforts on behalf of aftercare for retiring racehorses.

“The growth of this horse show, in both competition size and sponsorships obtained, has been incredible,” said Sarah Coleman, New Vocations' director of public and community relations. “We had 37 New Vocations grads show here this year; to see these horses come full circle reminds us why we work so hard to rehab, retrain, and rehome retiring racehorses. Those of us involved with Thoroughbreds know just how much these horses have left to give once they retire from the track–it's been a true gift to be able to show the world just how great they are, too.”

The show gives both newly retired racehorses and seasoned show horses a chance to compete in a variety of disciplines, including classes in hunter, jumper, pleasure, Western, and dressage. It marked the largest Thoroughbred-only hunter, jumper, and dressage show ever to take place at the Kentucky Horse Park.

Some notable highlights of the show included attendance by 68 “war horses,” defined as those who had started over 50 times or won more than $100,000 on the racetrack. These included Congrats Criminal (Congrats), who started 99 times over seven years of racing, and Tower of Texas (Street Sense), a multiple GII winner who earned $936,312 during his racing career. The oldest horse to compete was 27-year-old McVille (Count Dusty), while 3-year-old She's a Blossom (Tale of the Cat) raced the most recently, just four months ago.

“We are incredibly excited to see how much this show has grown and the amount of attention retired racehorses are getting,” said Kristin Werner, senior counsel for The Jockey Club and the administrator of T.I.P. “The entire show was extremely successful, and we were thrilled to have so many Thoroughbreds compete in the Championships in 2019.”

New Vocations has placed over 6,600 horses since 1992 and has six facilities in Kentucky, New York, Ohio, and Pennsylvania. The T.I.P., created in 2011, offers incentives for both competition and recreational horses in addition to these championships.