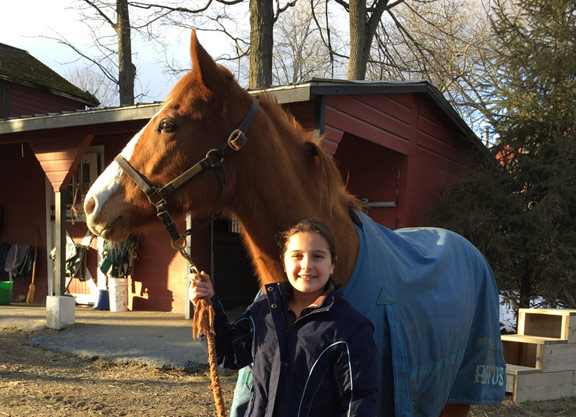 There is a common saying among the equestrian community that goes, “Every horse deserves, at least once in its life, to be loved by a little girl.” However, sometimes the opposite is true and the story of 12-year-old Olivia Roelke and her off-the-track Thoroughbred Dita (Suave) is a prime example.

Roelke was diagnosed with bipolar disorder in the fall of 2015 and later had what her mother Kim described as a breakdown.

“It seems her breakdown was related to this fall that she had [from a horse],” said Kim Roelke, a small animal veterinarian and horse owner. “We don’t really know what happened or why that prompted it. That was the incident that confirmed for sure what had already been diagnosed because she had these classic symptoms of a breakdown.”

Olivia Roelke’s breakdown caused her to miss several months of school and even left her incapacitated for a period of time. Her mother owned a horse that she kept at Bridget McNulty’s Misfit Farm in Hyde Park, N.Y., so the younger Roelke had grown up around horses, but she seemed to take a particular liking to McNulty’s 9-year-old Thoroughbred mare named Dita.

“After Olivia’s breakdown, I spoke to her mom because I know how therapeutic horses can be,” McNulty recalled. “She had a very strong connection with Dita, who is a very sweet horse. She was not a very social girl, but when she was with Dita, she was very expressive and very involved with the horse.”

The lifelong horsewoman continued, “I told her mom to bring her to the barn just to hang out with Dita. She did and Olivia got more confident and became more involved with things. Dita is like her soulmate. She got Olivia back into school, she’s back into riding, she’s communicating. It’s like that horse gives her the part of her she needs to function in life.”

Kim Roelke echoed similar sentiments, saying words could not accurately describe what Dita has done for her daughter.

“She had an extended period of incapacitation,” Roelke explained. “It was probably a good six to seven weeks of Olivia really not being able to function, but the last few weeks, there was desire to see Dita and get to the barn to give her some treats. Dita played a big role in giving her something to look forward to and to love. Liv has ridden many horses, but there is something about Dita in particular that created a very deep bond.”

McNulty lives a mile down the road from Vivien Malloy’s Edition Farm, where Dita was born and raised. Dita won once in 15 starts for Malloy and produced one foal, a now 3-year-old filly named Andale Julia (Here Comes Ben). Shortly after Andale Julia was weaned, Malloy donated Dita to McNulty and McNulty has now given the mare to Olivia Roelke.

“Vivien donated Dita to me and I asked Vivien if I could donate her to Olivia because I felt the child really needed the horse to get through life,” remarked McNulty, who is an emergency room critical care nurse in addition to being a hunter jumper trainer. “The teen years can be very tough for most people, so for people with emotional disorders it can be devastating. The past four weeks that Olivia has actually had the horse as her own, the child has gone through a transformation. Olivia’s mom sees a major difference in her at home and at school. It’s like Olivia has a purpose now.”

Olivia Roelke now attends a private school in Poughkeepsie, N.Y., and works with Dita every day after school as part of a local children’s riding program.

“Spending time with Dita has just been extremely joyful for Liv,” Kim Roelke commented. “Her relationship with Dita has brought her a sense of purpose. She has been thriving and Dita is something she has to look forward to all the time. She wants to please Dita. She wants to take care of Dita. She enjoys riding her and I think she feels a responsibility for Dita’s happiness, which makes her feel motivated and good about herself because she knows she is providing something for Dita as well.”

While Dita may not have been a star on the racetrack, she has proven she was destined for other things and will always be a star in the eyes of the Roelke family.