Ostilio Brings Crisford Back to Saratoga 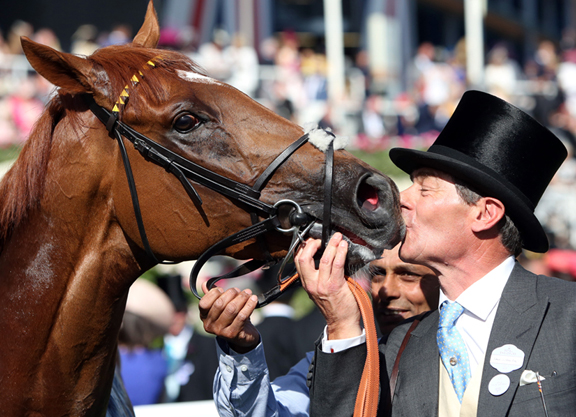 Crisford has made the trip to North America many times during his long tour as Godolphin's racing manager, so he knows the drill, but this was Ostilio's first journey across the Atlantic. If things go well, Crisford said he expects the chestnut colt will become a seasoned traveler on the international racing circuit. Ostilio's trek of about 35 hours last weekend from Crisford's yard in Newmarket took him through Belguim, on to JFK International Airport in New York City and ended with a van ride upstate to Saratoga. After clearing quarantine, he visited the main track Wednesday morning. Thursday morning he was on the nearby Oklahoma training track for his exercise that included a little burst of acceleration.

“It was just a couple of furlongs, what we would call a half-speed, a swinging canter,” Crisford said. “You probably don't have the terminology in America. Just a swinging canter for two furlongs.”

Ostilio showed himself to be a very capable runner in Europe last year with a 4-3-0 record in seven starts, topped by wins in the Britannia S. (Handicap)–Crisford's first Royal Ascot victory as a trainer–and the G2 Qatar Prix Daniel Wildenstein at ParisLongchamp. He finished well back in his two starts this year and enters the Fourstardave, a “Win and You're In” race for the GI Breeders' Cup Mile, off a three-month layoff.

“The thinking about coming to this race is that we felt that a flat oval track would suit him really well,” Crisford said. “We don't get so much of that in Europe and obviously it's a huge race. It fitted into his program really well because he hasn't run since May. But he's all about the second half of the year, so it was a very good starting point for him. He's coming here fit and well. Obviously, this is a big race and I hope he can acquit himself well. But the thinking is that the flat oval track going left-handed will suit him.”

While it is becoming a bit more common for international horses to ship to Saratoga to compete, the Fourstardave is not one of the races that attracts runners from outside North America.

“I've been extremely delighted to be part of it all because it's such a famous event, such a famous racetrack,” Crisford said. “Saratoga itself is one of the dream places in the history of horse racing. Just to be here is a win ticket anyway. When I was at Goldolphin, I spent a lot of time here, we had a lot of runners here and a lot of winners. Nowadays I'm a stand-alone trainer. It's very different, but it feels really rewarding just to be a part of it. To have horses that are good enough to be competing on an international level; it's pretty tough to find those type of horses. It's just a great privilege to be part of it.”

Ostilio is a homebred from the stable of Sheikh Mohammed Obaid Al Maktoum. His paternal grandsire is the great Galileo and he gets his name from Ostilio Ricci, the Italian mathematician who taught Galileo Galilei. The colt has shown speed and Crisford is interested in how he fares in a different style of racing.

“He races quite freely,” Crisford said. “He's drawn five and we'll see how quick he is out of the gate compared to American horses. We haven't schooled him to be American-quick. He's very much European-quick out of the gate, but that's very different to what you have here. Andrea [Atzeni] will ride him as he finds him, once he jumps. Hopefully he will jump well and give him a forward ride if he jumps into that sort of position.”

The Royal Ascot win at 10-1 was especially sweet for Crisford in the early years of his new career. The Britannia is for 3-year-olds and 30 went to the post for the straight mile.

“It's quite a demanding test. He made just about all the running in that race,” Crisford said. “Then when he went to France, that's a right-handed track. It's an easier mile than what we had to do at Ascot. He won that nicely and was very resolute and strong at the finish. But he's always been a horse with plenty of talent. He still is fairly lightly raced for his age and he's coming forward. Hopefully we can enjoy a productive second half of the year with him and move forward.”

After his Saratoga adventure, Ostilio will return to Europe. The Breeders' Cup could bring him back to the States.

“We need to see how he runs here in North America before we make any sort of future plans,” Crisford said. “This race is going to tell us an awful lot about what we need to know, what we're going to do going forward.”