Orpen Dies at 25 In Argentina 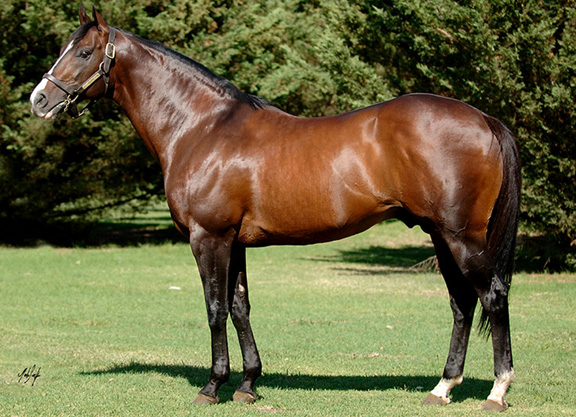 Orpen (Lure–Bonita Francita, by Devil's Bag), a leading sire in South America since his arrival on the continent in the mid-2000s, passed away Jan. 26 following emergency colic surgery, Turf Diario reports. He was 25 years old.

A $525,000 Keeneland November weanling purchase in 1996, around the same time his half-brother Jules (Forty Niner) won the GIII Nashua S. in New York, Orpen annexed the 1998 G1 Prix Morny in the colors of John Magnier and entered stud in Ireland for the 2000 breeding season. Also a half-brother to SW Etterby Park (Silver Hawk), Orpen was produced by a daughter of GSW & G1SP Coup de Folie (Halo), the dam of fellow Morny winners and French highweights Coup de Genie (Mr. Prospector) and Machiavellian (Mr. Prospector). His third dam was Natalma, the dam of the breed-shaping Northern Dancer (Nearctic).

Following on the South American success of Jules, Orpen was ultimately purchased from Coolmore and relocated to Haras Carampangue in Argentina. He also covered mares in France during the Northern Hemisphere breeding season. All told, Orpen is the sire of 22 Group 1 winners in seven different jurisdictions. The stallion of the year in Argentina in 2010, Orpen is the sire of 568 individual winners for prize money of nearly 200 million pesos and 69 Argentinian Classic winners, according to Turf Diario. Orpen is the broodmare sire of 65 worldwide graded/group winners, 13 at the top level, including GI Arlington Million hero Robert Bruce (Chi) (Fast Company {Ire}); Satono Diamond (Jpn) (Deep Impact {Jpn}), a two-time G1SW in Japan; G1 Falmouth S. heroine Giofra (GB) (Dansili {GB}) and Doctor Doom (Aus) (Domesday {Aus}), a Group 1 winner in Australia, sired during his early shuttling seasons.

Turf Diario reports that Orpen remained active and with high fertility rates even at his advanced age. According to the publication, he served 100 mares in 2020, of which 80 are reported in foal. He is the sire of 90 current 2-year-olds, a crop of 56 yearlings and 55 current foals.