Oppenheim: The Greatest Show on Earth 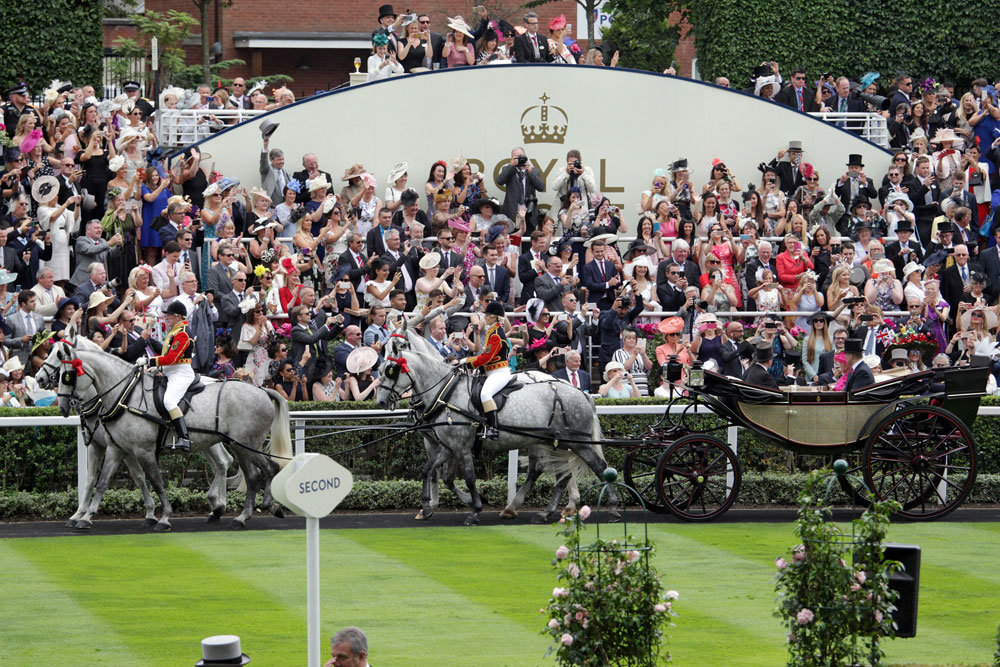 About Royal Ascot, you don’t use the phrase “at the end of the day”; rather you have to say “at the end of the week”. It is the sustained level of top-level racing, 30 races over five days, which sets Royal Ascot apart as the world number one horseracing experience; well, I suppose I should say it’s the world number one racing experience for professionals for that reason. For most of the nearly 300,000 fans who rock up sometime during the week, there are a lot of other motivations, too. Win, lose, or draw, the Americans who come over are invariably awed by the experience. WinStar’s Elliott Walden, a well-known devotee of dirt racing, even tweeted: “turf racing rocks,” even after his firm’s American Patriot (War Front) found himself out of his comfort zone in the meet’s opener, the G1 Queen Anne S.

And boy, can sires burst into prominence with so many opportunities, as New Approach did in 2012 when he became the first sire to have the winner of three 2-year-old races at the meet. We wrote about Scat Daddy last week, of course, and sure enough, Caravaggio’s win in the white-hot G1 Commonwealth Cup provided Scat Daddy with his fourth win of the week, outscoring Europe’s two best sires, Coolmore’s Galileo and Darley’s Dubawi, who had three wins each. It’s just about impossible to imagine that Scat Daddy had four winners and two thirds from eight runners at the meet, and that his lifetime Royal Ascot record stands at eight wins from 15 starts–53%! It was one of those really cruel twists of fate that Coolmore lost Scat Daddy just as he was about to leap two notches, from a $35,000 stud fee in 2015 to a $100,000 fee in 2016, as he died of a heart attack in December 2015. They do have No Nay Never, his first Ascot winner of the G2 Norfolk S. (and later G1 Prix Morny) in 2013, and Caravaggio will certainly be headed to Tipperary, possibly, it has been suggested, by way of the new $10-million The Everest race in Australia in October. Coolmore will also be hoping their $3-million, sales-topping Scat Daddy half-brother to Beholder and Into Mischief from Keeneland September last year is the business, and one absolute certainty is that the good-looking yearlings from his last crop, this year, will sell for big premiums.

One other sire, Darley’s Exceed And Excel, had two winners, including the one-three in Tuesday’s Listed Windsor Castle S. (five furlongs, 2-year-olds). He is also the sire of Coolmore’s Excelebration, the only other European second-crop sire, besides Juddmonte’s Frankel, to have a winner at Ascot last week. Frankel had four 3-year-olds hit the board, his winner coming in the 12-furlong King George V H. for 3-year-olds, while Excelebration did beat him to the distinction of being the first second-crop sire to have a European Group 1 winner, as G1 English 2000 Guineas winner Barney Roy turned the tables on his Newmarket conqueror, Churchill (only fourth), in the St. James’s Palace S. The other second-crop sire with Ascot form was Tweenhills’s Harbour Watch, himself an unbeaten 2-year-old by Acclamation, whose colt Santry ran a bang-up second to Sioux Nation in the Norfolk.

Two first-crop sires had big results. Dabirsim, who is from Hat Trick’s first crop, was the unbeaten French champion 2-year-old in 2011. He stood his first two seasons in Germany, then came back to France’s Haras de Grandcamp. His first crop includes the filly Different League, upset 20-1 winner of the G3 Albany S., for 2-year-old fillies at six furlongs. The other freshman sire with a Royal Ascot placing this year was Havana Gold, who like Harbour Watch raced for Qatari Sheikh Fahad al-Thani. A son of Teofilo who won the G1 Prix Jean Prat as a 3-year-old, Havana Gold is the sire of Headway, who lost a narrow decision to Rajasinghe in last week’s G2 Coventry S. Right now Dabirsim, who has six winners, holds a small lead over Havana Gold (eight winners) by progeny earnings (click here–first-crop EU Sires, worldwide earnings), with Tally-Ho’s deceased Society Rock (Rock of Gibraltar) third by progeny earnings, but leading by number of winners so far, with 10.

Honorable Mentions: Claiborne’s War Front, three seconds, all 3-year-olds, two Group 1-placed (Lancaster Bomber in the St. James’s Palace and Roly Poly in the Coronation); also Darley’s Iffraaj, who gets a boost via his 4-year-old Ribchester, convincing winner of the G1 Queen Anne and locking up his spot in the Darley stallion barn; and Japan’s Shadai Farm’s Deep Impact, the best son of Sunday Silence and the sire of September (out of the top-class Peeping Fawn), winner of the seven-furlong Chesham S. (Listed) on Saturday, the race Churchill won last year on his way to stardom. Contact Bill Oppenheim at [email protected] (cc [email protected]).