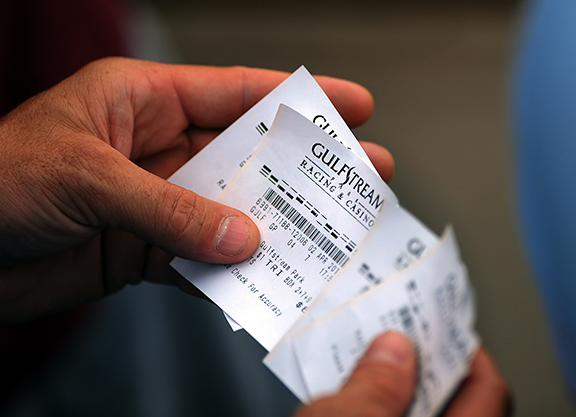 Ogden Mills Phipps, former chairman of both The Jockey Club and New York Racing Association and a legendary owner and breeder, heartily advocated for lower takeout nearly five decades ago.

In December 1976, Blood-Horse outlined the Phipps plea, a source of great concern given the rising competition in the New York market.

“With continuing declines in track attendance and mutuel handle, Thoroughbred racing is faced principally with twin threats, witnesses at an Aqueduct hearing stressed. There are the existing off-track betting structure, which has hurt track management and horsemen alike, and the shadow of competition from the Meadowlands in New Jersey, a cloud that can be expected to move over New York racing in September of 1977.

“To meet this latter threat, Ogden Mills (Dinny) Phipps, NYRA chairman, called for a 'significant, permanent decrease in pari-mutuel takeout on regular bets to not more than 14% including breakage.'…

“He (Phipps) recalled that the 65-day experiments with a 14% takeout in 1973 and 1974 produced the only increases in attendance and handle in more than 10 years.

“To continue the present situation courts disaster,' Phipps said, 'particularly in light of new and intensified competition from the new Meadowlands track in New Jersey.”

Fast-forwarding 44 years, the competition for the entertainment dollar is greater than ever, while wagering dollars are split amongst a host of direct competitors, some of which have been invited to “compete” adjacent to racing in the form of slot machines, table games and sports betting. Win takeout at NYRA tracks is now 16%, with trifectas, superfectas, Pick Threes and Fours running 24%.

Nearly 15 years on from the Phipps call, California racing was presented with a straightforward assessment of the impact of takeout in a report from the University of California's Giannini Foundation of Agricultural Economics.

“Perhaps the most notable finding from the demand analysis is that total pari-mutuel revenues are very responsive to changes in the effective takeout rate. In economic terms, the demand for wagering is found to be highly elastic with respect to the “price” of a typical wager. This result indicates that pari-mutuel revenues can be enhanced by reducing the current effective takeout rate.”

As the gambling market has evolved and grown, instead of responding to the price pressures and becoming more competitive, racing has gone the other way. The cost of betting–takeout–has increased. Slot machines often charge between 5% and 9%–as the bet minimum increases, the takeout goes down. Sports betting takeout hovers around 5 or 6% in mature markets.

Given the state of play in racing today, it might finally be time to reconsider how we charge customers.

For those readers that might be well aware of the complexities of bet pricing in 2020, we are not going to get into the weeds with host fees, source market fees and rebates–but all are meaningful considerations in more elaborate analyses.

Stick with us–we are only going to address takeout today.

What is the actual impact of takeout?

The more that is withheld, the smaller the return to bettors. Using actual pools from a race on Sunday, May 10, at Gulfstream, take a look at the possible payouts if the race had occurred at three tracks–Woodbine, which has just a 14.95% win takeout rate, Gulfstream with its actual 17% win takeout on the race, or Sunland Park with a 19% takeout. 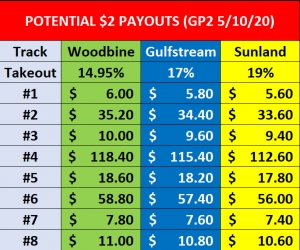 The winner of this actual race was #3, returning successful bettors $9.60 for every $2 bet. Had the race been run at Woodbine with their win takeout, winners would be returned $10.00, but just $9.40 at Sunland.

The cost of win betting at Gulfstream is higher than Woodbine but lower than Sunland.

Now consider the likely behavior of a winning $2 bettor in two of these scenarios, the Woodbine race customer who wins $10 or the Gulfstream race customer winning $9.60. At a $2 bet minimum, the winner of $9.60 can only make four more $2 bets without refilling, while the winner of $10.00 can make five more bets at this level. That's more opportunities for winning, more opportunities for continuing betting (the so-called “churn”) and an elongated entertainment experience.

The difference is magnified in nominal terms when the amount wagered is increased. 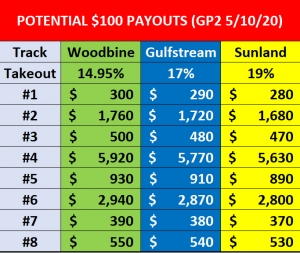 Do you even know your favorite track's takeout rates? Where does takeout stand for the rest of bets on racing in North America?

Until 2017, a “grass roots horseplayer organization” known as the Horseplayers Association of North America maintained an annual list of takeout rates and tied them to track rankings. Racing's customers are generally left in the dark otherwise, though some ADWs, like AmWager, note the takeout on their betting platform, but information is not always complete, and even when it is known, it might not give you a realistic portrayal of cost.

For example, a jackpot Pick Six bet with a 21% takeout and a pool split where half of the post-takeout pool goes to a jackpot for a single ticket winner and half to a daily consolation payout, yields a 60.5% effective takeout on days when there is no jackpot winner–which is most of them. That 21% takeout only applies to the ONE person who happens to be the single ticket winner. Not exactly a realistic representation.

It should be striking that Ogden Mills Phipps was advocating for lower takeout in racing nearly five decades ago, but even his words went unheeded.

Racing needs centralized leadership to govern some items in the best interest of its customers. While that does not have to be a “commissioner's office,” the Thoroughbred Idea Foundation offered suggestions for a reorganization in our January white paper, “American Racing's Sustainable Future.”

Lower takeout needs to be part of a revised business model for racing.

Nearly all parties have kicked the can down the road for far too long. All is not lost, yet, but a failure to act on these sorts of matters might help push us there sooner. Racing has many needs–big and small–which need concurrent attention. Add this to the list.