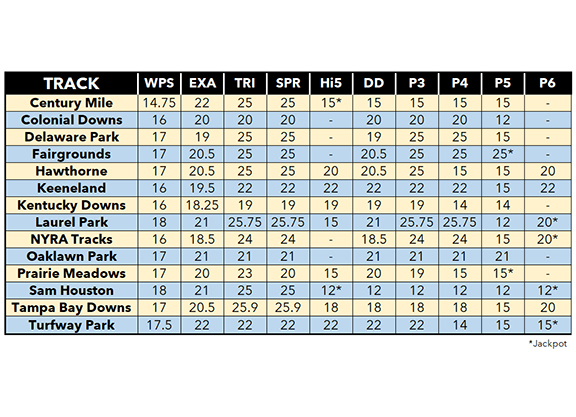 Amongst serious horseplayers, takeout rates in pari-mutuel pools are a frequent discussion. It should be a focus of breeders, owners, trainers and track operators. Unless they are serious bettors too, takeout rates rarely “get a run” from those constituencies, though.

Our recent #FreeDataFriday piece highlighted the impact of various takeout rates on win pools at three different tracks. The higher the rate, the lower the return to winners–and thus, the less they would have to churn through the pools and start another cycle of betting.

Recently, a few bettors lamented on social media that a single source of updated takeout rates for bets across all tracks was unavailable, and sourcing the exact rates was nearly impossible.     Our team set out to build one–scouring track websites, ADWs and even received a full “list” from what seemed a very reputable channel to have such information, only to find later it was replete with holes, inaccuracies or conflicts with other sources.

A press release from three years ago or a promotion which selectively highlights a gimmick, such as a shiny new jackpot pick-six with a “low” takeout which would only be experienced by one person–the single ticket jackpot winner on a day where it is hit, or a group of players only on mandatory payout days–does not count.

It shouldn’t be that difficult.

For Century Mile in Edmonton, Alberta, a city with a population of more than 1.4 million and North America’s newest racetrack, it is as straightforward as it gets.

The track, which opened in 2019 adjacent to the city’s airport, lists takeout rates prominently on their website. At their home page, hover over “Bet” and the menu includes “Takeout Rates.” The information is easy to obtain, and there might be a decent reason for it–the rates are quite favorable to horseplayers.

“As a new racetrack, we felt it was important to find a way to distinguish ourselves in a competitive landscape, by offering an extremely favorable takeout we are trying to incentivize horseplayers to give a new product a look,” says Rob MacLennan, racing secretary at Century Mile. “Takeout is not something we should be ashamed of, or hiding from our players, so we felt it was important to make it accessible especially when we are trying to offer the most competitive rates available.”

A total of seven standard tote pools have takeout rates at or lower than 15% (win, place, show, double, pick three, pick four and pick five)–a standout amongst continental tracks. The 2020 race dates for the Edmonton oval are due to be released as soon as the province of Alberta’s health minister confirms them in this unique period of time.

“In our opening season, we struggled both with field size and handle but are hoping some changes we have made in regards to post times, with a plan to run Fridays and Sundays, in the evening, as well as a reduction in the racing schedule, will allow a similar horse population to raise the average field size and provide a better product for our wagering partners and customers.”

We are listing the latest takeout rates here which are readily available from track websites across North America. To qualify for inclusion, the information has to be readily available on a track’s website, inclusive of every bet type offered by that track, specifically identify the total takeout rate and delineate any unique deviations or features (on-track takeout being different than off-track, etc).

To suggest some of this information is buried would be an understatement, and we may have missed some tracks in assembling this list. Now, there could be perfectly rational reasons we missed it–a track that has yet to open for the season, bad web design or simple oversight.

If you found one we may have missed and it is readily available (ideally not buried behind one hover, three clicks, a scroll and then listed on the last of a four-page PDF – don’t worry, we DID include the Fairgrounds despite having missed it in early research), contact us and we will update our list.

That’s just 16 tracks (NYRA representing three) out of roughly 70 across North America which have published their actual takeout rates for easy customer inspection.

The Stronach 5 returns to the betting menu Friday–a five-race sequence connecting races at Laurel, Gulfstream, Golden Gate and Santa Anita. Carrying a $1 minimum investment with a 12% takeout, you can also get free past performances as part of a promotion between the In The Money Players’ Podcast and DRF Bets.