Open Letter to the Industry: #FreeDataFriday – A California Wake-up Call 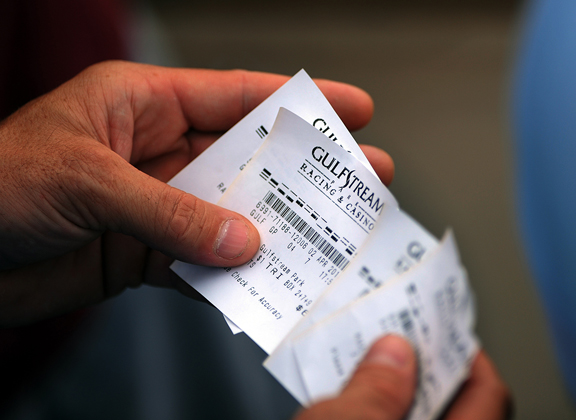 We cannot say this any simpler: American racing does not have a fair and equitable split of the takeout dollar, it has overly and foolishly relied on alternate sources of gaming to supplement purses.

So, we remind you–whether you are for or against a ‘federal bill,’ a Jockey Club member, a commercial breeder, a small syndicate member or anything in between–the status quo is untenable. Something must change.

The economics for the sustainability of racing are all askew.

Their percentage of total handle on racing is at an all-time high, essentially 100% of total racing betting handle in America at the moment. When a “new normal” returns, it is likely more people who have been kept away from the track but finally opened ADW accounts will continue using them, increasing the overall share of ADWs compared to pre-pandemic level.

The problem is that while the financial splits the big ADWs receive have grown significantly, due to long-standing, negotiated rates, the amount this handle contributes to purses is incredibly small. The problem is exacerbated by a loss of other revenue sources for purses, namely, casinos.

The National Thoroughbred Racing Association, an organization which its own former head, Tim Smith, described in 1999 as being formed by “the industry, led by The Jockey Club, Breeders’ Cup, Keeneland, Oak Tree, and the NTA,” commissioned a report, published in January 2004, which actually gave tracks the blueprint to exploit this model.

The report offered three key measures to remedy what the NTRA Board of Directors identified as “one of the leading problems facing the Thoroughbred industry.”

That problem was “the phenomenon of ‘handle up, purses down.” Essentially, handle was rising and purses were either not growing at the same rate, or as had been experienced in 2003, they fell.

The three measures the report offers to “remedy” this are summarized as follows: (1) increase handle, (2) get tracks into the ADW business, and (3) create economic incentives through competitive takeout rates to grow the betting base while also enhancing technological development to ensure a level playing field for all bettors.

Item one has never really happened–in fact, it’s just the opposite.

Item two, essentially, got 100% of the focus as tracks became ADW companies, through acquisitions and development.

Instead of addressing the bigger picture, and the impact to all stakeholders, the biggest track owners got into the ADW business and focused their efforts on maximizing them as a revenue source–which also happens to provide the smallest slice to purses. Concurrently, horsemen were left to rely on new-found casino subsidies to make up the lion’s share in purses.

Whatever you want to call them–payments from casinos have served as a massive subsidization to purses. There is little doubt that tracks, already the home for legal gambling, were conduits for bringing casinos into parts of mainstream America. As much as the industry might want to suggest that the casinos exist because of racing, the modern reality must be acknowledged–it really doesn’t matter much anymore.

By relying on alternate gaming revenue as a primary source of purse funding in many states, horsemen have been generally benign to declines in handle. That is problematic. Since the NTRA’s 2004 report was published, handle is down 27.4% in nominal terms, but adjusted for inflation, it’s down a staggering 49%. As for purses since then, well, they ARE up, but only in raw numbers. Nominal purses are up about 10% and prize money per race is up 15%. In real, inflation-adjusted terms, purses are actually down 19% on a per-race basis.

So what could purses across America look like in a landscape totally free of casino subsidies? It isn’t pretty.

The comparison we are about to make is not perfect.

According to the California Horse Racing Board, bets on California racing or from California bettors on racing elsewhere totaled approximately $2.9 billion in 2019. An effective overall takeout of 20.9% was applied, withholding $608 million from those bets. Of that takeout, 21.12% went to purses, or roughly $128 million. So, from $2.9 billion in wagers, purses that sustain racing equated to about 4.4% of every dollar bet.

Consider how purses would look if this model was stretched across America. 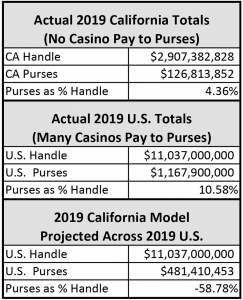 We can see the future of purses for American horsemen in these estimated figures, fraught with assumptions, including that all other variables remain unchanged. These numbers are far from perfect, but clearly reveal how dangerously dependent upon casino subsidies our sport has become.

What is American racing like with a nearly 60% decline in prize money? In a few months, racing might get a taste of that.

Horsemen must commence re-negotiations and force a changed model, one that favors the racing product rather than the gaming company, then develop conditions that will attract wagering as opposed to the high-cost actions which have driven bettors away from the sport for years. High-profile Thoroughbred owners and trainers, many of whom have stayed out of the discussions for years, must be drawn into the fray.

Horsemen need revenue from takeout now, and likely more in the future, than ever before. That should not mean HIKING the price of betting, that’s exactly the wrong move. The path is a combination of reduced pricing on betting and re-negotiated deals that yield more money to purses.

The sustainability of the business is at stake.