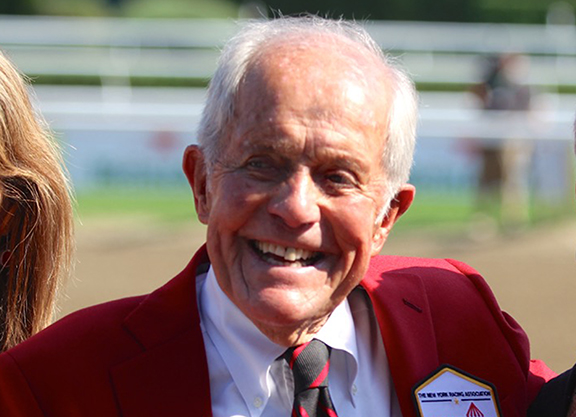 Just imagine this: A young assistant horse trainer–with a decent background–goes out on his own. He must have horses to train, so, daringly he announces his new venture by running a full-page ad. This–in itself–is an unthinkably audacious, cheeky act in the ingrained decorum of horse trainers. Even more outrageous, the young trainer's ad says in effect that he does not think the average racehorse of today runs as often as he could. Racehorses are meant to race, he points out, and the battle cry in his new outfit is that horses are going to run more and train less, while getting the best possible care.

Now there is a message that much of the horse world has hungered for. I believe that young man or woman would be swamped with business.

Half a century ago, Hirsch Jacobs was one of the most successful and legendary horse trainers in the history of the American Turf. His program was that once his horses were fit, he put them in the entries every week or so. Therefore, they really required almost no serious training, The standard practice of today would be to breeze them once a week for five, six or seven weeks and then race. Jacobs's horses were plenty productive in every way. They were subject to less, or certainly no more, wear and tear, but had more opportunities to make some dough and provide enjoyment.

Our sport and industry has its bright spots. And certainly there are areas of great concern, and there will continue to be, as long as there is no central point of governance. The public perception regarding the use of drugs is one gigantic concern, of course. But another big one is that racehorses barely ply their trade. A guy buys a racehorse to race and have fun (and that is the primary reason to buy one!), but the average horse of today rarely races. There is not much action, not much fun. Ridiculous as it sounds, trainers seem to muse over the almost rhetorical question: how can I figure out how not to run this horse?

I accept that the breed is not as tough and hardy as it once was. The reasons put forth for this decline are: breeding for precocity, track surfaces, winter racing, unsound ancestors, hot house preparation for auction sales, medication. I don't think any of them explain it adequately. And I do not think that the degree of deterioration in the breed explains why a horse of the 1970's could run, say, 40 times during his life, and his counterpart of today struggles through a career of 15 starts. And if you were to examine the regimens of earlier eras, those comparisons would be startling indeed.

How did it get to be such a great thing to run a 3-year-old only two or three times before the Kentucky Derby? I do not know, but today's most gifted and celebrated trainers swear by that procedure, in slightly varying degrees. And this era certainly has some truly great horsemen.

The racing game has always been fallow ground for fads. Think of just the veterinary field. We went mad for awhile over myectomies, EPM (possums were reeling from exhaustion from the rigors of spreading this disease), tie-backs, tie-forwards, hock procedures, pumping air into shoulders, swimming, and bone bruising–the current go-to explanation for unsoundness.

So too have there been fads in training procedures. I believe the late Bobby Frankel–an extraordinary horseman who certainly marched to his own beat, with a lot of people observing–had a lot to do with the present-day paucity of starts for horses. Frankel was to training what Dr. Larry Bramlage is now to veterinary medicine–a greatly respected, bona fide guru. When Frankel had Medaglia d'Oro, I believe he followed a surprisingly unorthodox campaign for that horse–and other horses in his barn. At a time when this would have seemed quite unorthodox, he gave him two-, three-, four-month intervals between races. The horse had a fabulous year, and a lot of other horsemen took note, and some said, “Maybe he's got the key to it.” Some other big time trainers followed suit consciously or sub-consciously with a lot of stock that was not as good as Medaglia d'Oro, and that fanned the flames.

This is one man's theory. Hopefully, these comments will not bring on a torrent of outrage for my espousing the “abuse” of the horse. Nor should any individuals be identified and then defended for their training programs.

But this I do know: In a game that has its own sizeable set of challenges, it is not desirable that the runners (the performers) keep trending towards less racing. I hate that. And it will be a trend that will be difficult to reverse.

Then too, how are we to enjoy prognosticating on who is going to win the Kentucky Derby when we don't know much about the players?

Maybe the hypothetical, young trainer with that full-page ad will spark a welcome new fad.