Home » Archive » Op/Ed » Op/Ed: The CHRB May Just Have Saved the Sport of Horse Racing

Op/Ed: The CHRB May Just Have Saved the Sport of Horse Racing 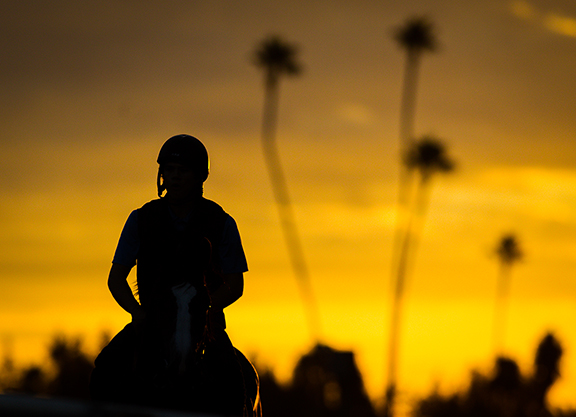 When the members of the California Horse Racing Board voted Thursday to ban the use of the whip (and it is a whip and not a crop) my first thought was one of relief. That was not so much because I've never been a supporter of whipping animals or understood the insistence on the part of the other side that whipping was necessary. No, it's because I knew I could go to sleep later that night a lot more confident that my sport will survive.

There will be plenty, maybe even a majority, who will disagree with me and find what I just said to be over-the-top hyperbole. Well, here's my response: You people don't get it.

The rash of breakdowns at Santa Anita was the biggest crisis I have ever seen this sport face in the nearly 35 years I have been covering it. With so many horses dying and with it happening in a major media market where every television station in town was telling its viewers night after night that horses were dying out at Santa Anita and, oh by the way, they still whip these beautiful animals to make them run faster, the public had had enough.

Horse racing is an insular society and far too many people were completely oblivious to the gravity of the situation. It's not 1935 anymore. People love animals and don't want to see them be abused. That's why there's no more circus, no more killer whale shows at SeaWorld and why 41 states have laws on the books outlawing dog racing. It is very possible that the same thing could have happened to horse racing, not just in California but across the country. California would have been the first domino to fall, with more, surely, to come.

Yet, at the CHRB hearing, one person after another, including representatives of the Jockeys' Guild, tried to make the argument that the new whips are softer than a roll of Charmin and they don't hurt the horses one bit. I doubt that's true, but maybe it is. Either way, it doesn't matter. The only thing that does is public perception and the majority of the public believes whipping horses is animal cruelty.

The only salient point made by the pro-whipping side is that a jockey may occasionally need the whip to correct a horse that is about to bolt or do something dangerous. And that's exactly why the CHRB will allow a jockey to carry a whip but only use it in case of an emergency.

Then you had some Quarter Horse guy, who testified that his horse couldn't run a bit until they started hitting her, she turned into a star and they made a pile of money, money they never would have made without the blessed use of the whip. Too bad. We've been told over and over again that horses love to run, that the greats ones have the courage and heart to dig down and get to the wire ahead of their competition. Then why do they need to be whipped? If a horse is lazy and can't run without being hit, they don't deserve to be successful.

I do not believe that whipping played a major role in 22 horses breaking down at Santa Anita. It may not have played any role. Again, it's all about perception and not reality. The members of the CHRB understood the gravity of the situation and understood that something had to be done to appease PETA, et. al. Go ahead and rail against PETA all you want. I'm not a fan either. But they have 700,000 members in California alone and the clout to get things done. You don't necessarily have to be their friend, but you sure don't want to be their enemy.

There was also the threat of government intervention. Congresswoman Judy Chu, who represents the district Santa Anita is located in, let it be known that she was “outraged” by the deaths at Santa Anita. She said she would call on the House Energy and Commerce Committee to investigate and hold a hearing on the treatment of horses at Santa Anita and throughout our country. We don't know for sure, but if you connect the dots it's not hard to conclude the Chu had a role in the CHRB's decision. She may have been a bigger threat than even PETA and the CHRB could ill afford to go against something she clearly wanted–a whip ban.

The other choice was to sit back and do nothing or put another band-aid on the problem and if the CHRB would have allowed that PETA's next move was clearly to try to get a measure on the ballot in California to ban the sport. I have no doubt they would have gotten that accomplished and it would have been far from shocking had the voters of California voted to close down racing. Let me repeat: there was a real possibility that racing in California was going to be banned.

That's exactly what happened in Massachusetts in 2008 when a group called GREY2K USA got a referendum on the ballot, the Massachusetts Greyhound Protection Act, to ban the sport and it passed by a 56-43 margin. You'd have to either be very arrogant or very ill-informed to believe that that couldn't happen to horse racing.

Racing still isn't out of the woods. We still have whipping in all the other states and a report just came out that, among the tracks that share their casualty numbers, Churchill Downs had the second highest rate of fatalities in the country. A headlined in USA Today declared “Churchill Downs is one of the deadliest racetracks in America.” From a PR standpoint, it gets no worse than that. And the sport hasn't made nearly enough progress on ridding itself of drugs, Lasix included.

What the CHRB accomplished was get PETA to back off. It was notable that when testifying Thursday Senior Vice President Kathy Guillermo was not her usual vitriolic self. While she said she would not support any enterprise that profited off of animals, she was clearly pleased that racing had taken what she sees as a step in the right direction. She also complimented The Stronach Group for its efforts to enact change. PETA is not against small victories, and this one all but ended the threats to have a ban racing vote put on the California ballot.

What happened yesterday can't be the end of this. While it represented a monumental shift in the way racing will be conducted in California, animal rights activists will see it only as a first step. The train left the station Thursday and it must not be derailed. The sport must continue to do the right things, stop paying lip service to all the problems, and clean up its act.

To those who disagree with me, I'm telling you to wake up, get your heads out of your you know what and join the effort to make this a safer, cleaner sport where the deaths of horses is reduced to the lowest possible numbers and whipping is banned everywhere. Because if that doesn't happen, you're not going to need your whips and your Lasix, your clenbuterol and all your other pharmaceuticals much longer. They'll be pretty useless if there is no more horse racing.