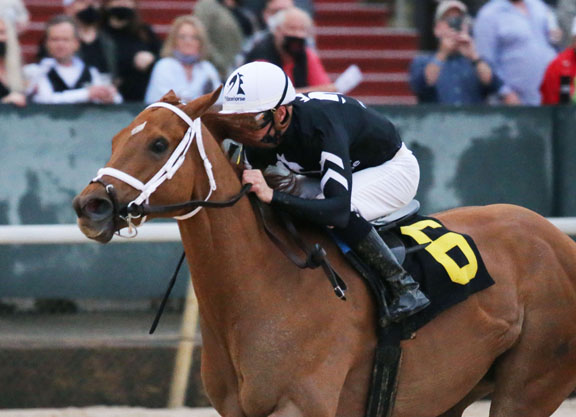 Don't get me wrong. I respect Monomoy Girl (Tapizar). She's right up there among the best fillies and mares to compete in any of our lifetimes. But there was something routine about her victory in Sunday's GIII Bayakoa S. at Oaklawn Park.

It was the 16th chapter in what has essentially been the same story from the start. In 15 of her 16 races, she has crossed the wire first, always against fillies and mares while winning in a manner better described as professional rather than breathtaking. There were some decent fillies, including Grade II winner Finite (Munnings) in there, but there was never any doubt who would win the Bayakoa. Monomoy Girl is just a lot better than those horses. She's just a lot better than any filly in training.

Will the kid gloves come off? It's time for that to happen.

Through her 5-year-old year, Monomoy Girl was owned by the partnership of Michael Dubb, Monomoy Stables, Stuart Grant and Bethlehem Stables, and the group did a masterful job of managing her. They won the two races that matter most for a 3-year-old filly, the GI Kentucky Oaks and the GI Breeders' Cup Distaff. Due to a variety of setbacks, she missed her entire 4-year-old year and, then, the owners were understandably cautious when bringing her back last year as a 5-year-old. She didn't return until May, ran just four times and completed her year with another win in the Distaff and another Eclipse Award.

A few days after the Breeders' Cup, she was sold for $9.5 million at the Fasig-Tipton November Sale, and her new owners, Spendthrift Farm, My Racehorse Stable and Madaket Stable, gave the sport a gift when announcing they would run her this year as a 6-year-old. Presumably, she will be retired at the end of this year after the Breeders' Cup and will settle in at Spendthrift, where she will be among the most valuable broodmares on the planet.

The safe route would be to stay in her own division and run in races like the Apple Blossom, the GI La Troienne S., the GI Ogden Phipps S., the GI Personal Ensign S. and the GI Spinster S. before attempting to win the Distaff for a third time.

But what would that prove? She would be heavily favored in each race against overmatched rivals and it's unlikely that anyone would beat her.

Even with an unprecedented third win in the Distaff, should Monomoy Girl stick to running against fillies and mares, she will have retired without an all-important race against males. And that would set her apart from the two greatest fillies of her era. Rachel Alexandra (Medaglia d'Oro) defeated males in the GI Preakness S., the GI Haskell Invitational and in the GI Woodward S. Zenyatta (Street Cry {Ire}) won the richest race on the U.S. calendar, beating males in the GI Breeders' Cup Classic.

Should Monomoy Girl stay in her division and run the table, she'd earn about $2 million on the racetrack. Considering how much they paid for her, how much she is worth as a broodmare and that Spendthrift has very deep pockets, it's doubtful that $2 million really matters to them one way or the other. And if they were in any hurry to retire her, at age six, they had every reason to do so rather than bringing her back to race this year.

The hope is that Spendthrift bought her and brought her back to the races this year, at least in part, so that they could enjoy what could be a terrific ride from an outstanding mare. Winning the La Troienne at 1-5 for the second straight year is not going to accomplish that. Or do anything for her legacy.

It would have been nice to see Monomoy Girl do what her rival Midnight Bisou (Midnight Lute) did when she took on males last year in the $20-million Saudi Cup. Or they might have pointed her for the G1 Dubai World Cup. It's too late for that, but not too late to schedule a post-Apple Blossom campaign that includes races against the boys. I'd like to see her run in a bunch of them, maybe the GI Whitney S., the GI Jockey Club Gold Cup and then the Classic. But I won't complain if they pick only the Classic. That's the race she belongs in.

Spendthrift owner B. Wayne Hughes is a smart businessman and he has every right to try to make as much money off of Monomoy Girl as possible. But he also comes across as someone who understands the history of the sport and is a sportsman. He gave the other great mare he campaigned, Beholder (Henny Hughes), a chance against males and she came through with a dominant win in the 2015 GI Pacific Classic. Let's hope he does the same with Monomoy Girl. Win or lose, she deserves the chance to show the sport just how great she really is.