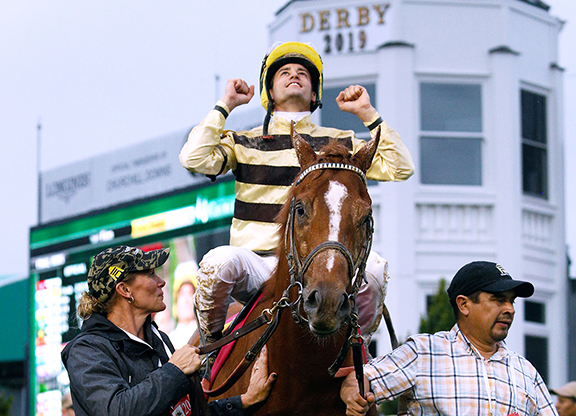 It has now been 12 days since the stewards at Churchill Downs made history by disqualifying Maximum Security in the 145th running of Kentucky Derby, the horse that crossed the finish line first, and awarding the victory to second-place finisher Country House.

As we all know by now, this was the first time the winner of this classic race, the most cherished race in all of American thoroughbred racing, was ever disqualified for having committed a foul during the running of the race. All of us who work in or bet on racing know disqualifications such as this one are commonplace and are also controversial with an abundance of strong opinions each way.

But Maximum Security's disqualification was a bit more serious and a lot more disputed because it occurred in the Kentucky Derby, and Gary and Mary West, the owners, were by all accounts, “damn upset.” Why not? Taking down the winner in the Derby never happened before and in their minds they wanted to make history…but not this way.

But legally speaking, if the Wests believe they can overturn this disqualification, despite how harsh this may sound, they are facing an uphill if not futile battle. (Read their lawsuit here.)

While the Wests can bring an action in Federal Court, this will likely not be a successful jurisdiction.

Federal Courts have a long history of “abstaining” from deciding the merits of a case that deals directly with state law matters and Constitutional interpretation.

Pursuant to the Younger and/or Pullman Abstention doctrines, which are related to the “comity” between the state and federal courts, it is likely the Federal Court will dismiss the case and demand it be brought in the state courts of Kentucky.

The Federal Court, as it has done many times in the recent history, will likely reason the Kentucky State Court is the proper jurisdiction for such an action.

Under this scenario the Wests will likely be forced to litigate the matter in State Court where the law and the precedent is clear and not in their favor.

Primarily, Kentucky Racing Regulations deem the Stewards' decision regarding interference of a horse, including Maximum Security, is a “final order” and consequently not appealable.

The right to appeal (or lack thereof) of the disqualification of a horse is governed by the Regulations of Kentucky Racing 810 KAR 1:017, Section 4, which is entitled Final Determination of Objections to Acts in a Race.

“The stewards shall make all findings of fact to all matters occurring during the incident to the running of a race, shall determine all objections, and inquires based on interference by a horse, improper course run by a horse, found riding by a jockey, and all other matters occurring during an incident to the running of a race, and shall determine to the extent of disqualification. If any of the horses in a race for foul committed during the race. Findings of fact and determination shall be final and no appeal may be taken thereon . . .

The bottom line is this: in Kentucky the stewards' decisions regarding disqualifications are final and are not appealable. In laymen's terms, this rule is analogous to the rule in baseball where balls and strike calls are not reviewable.

Kentucky is quite unique in this regard as many other states, including New York and New Jersey, allow the owners of a horse disqualified in a race to appeal a stewards' decision and in turn to have a hearing on the merits. But that's New Jersey, and New York and not Kentucky.

Kentucky law says no appeal and when in Kentucky do as Kentuckians do and do not try to appeal! Why? Because the law in Kentucky, at least as of today, says so.

One might argue, as the Wests appear to be doing, that's BS; what about going to court? And why not? This is America after all, and the Wests have rights, too.

Well, maybe yes and maybe no.

The Wests might argue the lack of the ability to appeal what they believe to be an “egregiously bad decision,” somehow violates their right to due process. Sounds fair, right?

Why not go to State or Federal Court and pursue a cause of action pursuant to 42 U.S.C. Section 1983 and argue that the Kentucky Racing Commission, acting under color of State Law denied the Wests due process by denying them a hearing? Sound right doesn't it?

After all, the Wests would likely argue that their horse won the race fair and square in their mind, and that they have a “property interest” in that purse and being named the winner and they, the stewards, and the State of Kentucky and their Racing Commission and agents (the stewards), took it away without due process of law, i.e., no hearing, no review. This is America, right?
The answer to that question is a resounding and emphatic no, based on a legal precedent, a principle or rule which is used by the court when deciding later cases with similar issues or facts.
Pursuant to a decision by the Court of Appeals of the Commonwealth of Kentucky, this argument was already ligated and the reviewed by that Court (the second highest Court in Kentucky) in the case of William E. March v. Kentucky Horse Racing Commission. (N0. 2013 CA-00900-ME. March 29, 2015.)

The facts in the March case are as follows: Mr. March's horse “Ethical Lawyer,” (I kid you not; that was the horse's name) was disqualified from the win in twelfth race on February 24, 2014, at Turfway Park, a far cry from winning the Kentucky Derby, but as any horse owner knows a win is a win, and they are hard to come by!

So Mr. March, pretty mad himself about the disqualification, attempted to appeal it and upon being rebuffed by the Commission, as were the Wests, sued in the Franklin Circuit Court arguing among other things, “the denial of the right to a hearing and appeal to owners of a winning horse at a regulated race meeting a denial of due process.”

Upon having the case dismissed at the Circuit Court level, Mr. March said, again, this is BS, and appealed his case to the Court of Appealsm and here is what that tribunal had to say in part:
“March's final argument against the validly of the Kentucky Horse Racing Commission's Final Order is that it deprived him of due process as it required him to forfeit Ethical Lawyer's purse without a hearing. As discussed, March was not required to forfeit Ethical Lawyer's purse, he simply did not win it to begin with. March's purse money was not taken or forfeited, as March insists. Rather, March never had an entitlement to the purse monies because Ethical Lawyer did not win the race. . . March's interest in the purse money does not constitute the required protected property interest . . .”

In conclusion, the Kentucky Court of appeals ruled that the Kentucky Horse Racing Commission applied the correct rule of law, March had no constitutionally protected interest that demanded due process and upheld the decision of the Franklin Circuit Court. Thus, the disqualification stood.

While some may disagree with the legal principles cited in the March case, this is the law in Kentucky. Thus, from a legal perspective, if you race a horse in Kentucky, even in the Kentucky Derby, and the horse is disqualified, you cannot appeal, and if you go to court, at least for now, unless the Kentucky Supreme Court changes the rule of law, you will lose.

Now, you may not like this law, but this is the law and like it or not, at least in Kentucky, once your horse is disqualified for a foul during the running of a race, it stays disqualified.

Andrew Mollica is an equine attorney who practices in New York and New Jersey. Prior to becoming an attorney, he was a prominent jockey's agent who represented Hall of Fame jockeys Chris Antley, Angel Cordero, Jose Santos, Pat Day, Gary Stevens, and others. He was also a racing official, correspondent for Daily Racing Form and a broadcaster for both WFAN and ESPN radio. His practice is located in Garden City New York, near Belmont Park. He graduated from Hofstra Law School, and has in the past represented Bill Mott, the trainer of Country House.