Home » Archive » Op/Ed » Op/Ed: All of a Sudden, the Only Betting Game in Town

Op/Ed: All of a Sudden, the Only Betting Game in Town 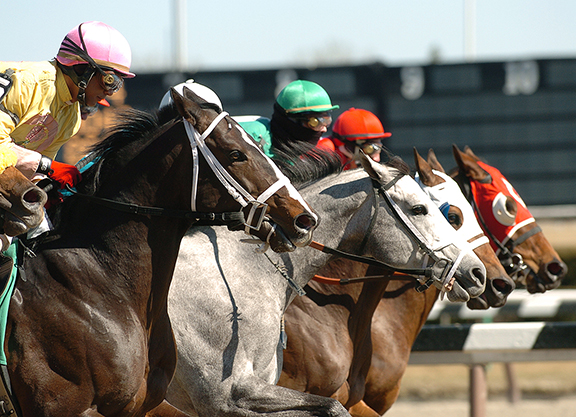 In a way that nobody ever envisioned or wanted, the gambling part of our industry is about to have a massive social experiment imposed upon it: For the near-term future, betting on horse races will be pretty much the only form of sports wagering in America.

In an effort to mitigate the spread of the COVID-19 virus, professional basketball and hockey have suspended their schedules. Major league baseball's season opening has been pushed back. The NCAA basketball tournament has been canceled outright.

Racing's response to the coronavirus has been different, and for the time being, it should be. As of this writing, there have been no outright abandonments of Thoroughbred meets (beyond Fairmount Park ceasing live racing until further notice). Instead, most of the nation's largest tracks have announced that races will go on in front of grandstands closed to the public.

Horses are already stabled on backstretches nationwide, and their human connections want them to run so that everybody—from owners to grooms—can stay financially afloat.

But unlike schools and workplaces that are rushing to implement complicated forms of online infrastructure so that students and employees can accomplish work remotely, horse racing is uniquely positioned to have a seamless transition into all-remote betting, because simulcasting has been part of the fabric of the game for 30 years.

To be clear, I'm not painting a panic-tinged pandemic as an opportunity for the racing industry to pull off a massive cash grab. Far from it.

But the prospect of races being able to go on while other sports are forced to shut down could equate to an economic lifeline that keeps the game breathing above the virus flood when it otherwise would be drowned by it.

By now you've already heard plenty of snide (but alas, justifiable) comments related to how much of our sport's day-to-day action goes on in front of sparse crowds anyway, and how near-empty racetracks long ago devolved into prime locations to practice “social distancing.”

But sarcasm can't obscure the fact that online bettors have and will continue to be the chief drivers of pari-mutuel handle. Now they'll operate under near-vacuum conditions against greatly diminished competition.

The fate of the 2020 Triple Crown races has yet to be decided. Those special events certainly do rely on sizable on-track crowds to bolster business, not to mention the flavor and spirit of those big days, plus the huge economic impacts those races provide for their host cities.

But the remainder of the racetracks that generate a Thoroughbred betting product in the early spring? They are poised to give “business as usual” their best shot, sans fans.

Beyond whatever betting handle can be generated, the thread of normalcy that day-to-day racing will provide should be of appreciable benefit to the industry. There is comfort in routine.

But how will the betting numbers shake out? Here's a guess at a few pluses and minuses that will factor into the equation.

No major sports to bet on: While it would be foolish to assume that everybody in America who was going to bet on ballgame or fill out an NCAA bracket this month is automatically going to gravitate to horse race betting, you have to think there will be at least some benefit to being the only form of sports action. Will advance deposit wagering (ADW) companies invest in a realistic push to go after some of these potential customers?

When legalized sports betting dawned nearly two years ago, “crossover” was a big buzzword. Bricks-and-mortar sports books at racetracks tried to sell the industry on the notion that sports bettors would be nudged toward playing the ponies. For the most part, that hasn't happened. Without much action going on in their sports books, will those venues tap into whatever databases they've amassed to give their sports customers an incentive to play some races instead?

The empty grandstand conundrum: Live handle is going to nosedive precipitously nationwide, and will obviously be zero at those tracks that have closed racing to spectators. Some of those racegoers will gravitate to online or mobile betting, or even to off-track betting venues that might remain open.

But overall betting handle losses will also include the vanished revenue from on-track players who would ordinarily be playing imported signals from other tracks alongside the live product, and that will be a substantial hit.

There will be a relative offset for tracks running live without fans because of reduced staffing. No on-track customers means slicing most race-day personnel (mutuels, admissions, food workers, security, janitorial) out of the operational equation. The financial impact of this will vary from track to track.

People stuck at home needing something to do: A wide swath of the population will include workers mandated to stay home and people who choose not to go out. If they tune in to races to pass the time, will their pari-mutuel contributions make a difference? More importantly, will the industry give them a reason to watch in the first place?

I'm not postulating that people who are indeed sick are going to be jonesing to play a late pick three somewhere. Those folks clearly have far more pressing health issues to worry about.

But not everyone who will be stuck at home is going to be there because they are under a mandated quarantine. Be sure they know the show is going on. This means reaching out to both lapsed and casual ADW customers.

About 25 years ago, you'd hear of occasional proposals to build tracks that made no allowances for spectator amenities, but instead optimized the broadcast viewing experience to a heightened degree.

This was before the internet, and the concept largely got ridiculed whenever it popped up. No such track ever got built in America.

But the basic idea behind “Simulcast Downs” would be looking pretty good right now in the midst of the current crisis, wouldn't it?