'One of the Good Guys': Barry Abrams Dies at 66 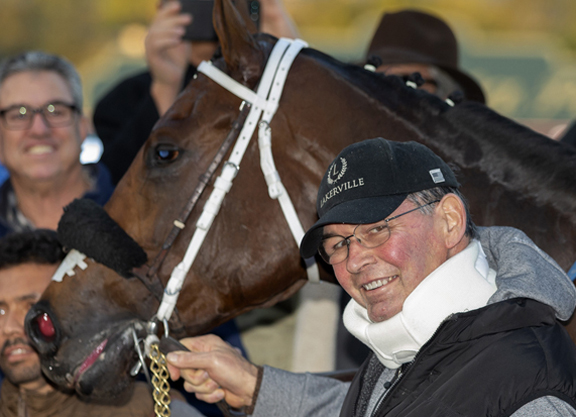 A towering presence of California horse racing in both stature and sheer strength of character, trainer, owner and breeder Barry Abrams has died at the age of 66.

“He really looked into the soul of a horse,” said David Abrams, Barry Abrams's brother. “He had horses run that didn't run for anybody else.”

Abrams had battled throat cancer for more than 15 years.

“He never once complained about what he was going through,” said trainer Richard Baltas, Abrams's former assistant. “He helped people who were less fortunate than him and was one of the good guys at the track.”

From hard-scrabble beginnings–“One of the underdogs. The little guy with a small stable,” said David–Abrams left an indelible stamp on the sport in the Golden State. From just over 6,000 individual starts, he secured 688 victories and more than $30 million in prize money.

“He was brilliant with his claims,” said David, of his brother. “He claimed two horses from Richard Mandella. One became a Grade I winner [Famous Digger], the other one was Unusual Heat. He saw in Unusual Heat what other people didn't–they thought he was crazy claiming a 6-year-old with potential bowed tendon. He said, 'the horse is worth what I'm claiming him for as a sire.'”

Abrams remained a minority owner of Unusual Heat, who stood at the Harris Ranch in Coalinga, and eventually became the all-time leading sire in California through his offsprings' earnings.

“Barry was a remarkable horseman and a real horse whisperer. He was also a master at navigating the racing office, which I think is a lost art in trainers,” said Harris Auerbach, managing partner of the Unusual Heat Syndicate.

“He taught me an awful lot about horsemanship, about gamesmanship and about life,” Auerbach added. “He was just a giving, caring, remarkable man.”

Over the years, Abrams hewed closely to the ethos, “you don't get paid for workouts,” becoming synonymous with moderately bred horses who earned their supper on the track.

“I remember a horse called Bengal Bay, one of the first horses we were successful with. He ran it three times in nine days,” said David. “Even [trainer] Roger Stein, who Barry worked for, criticized him for doing it. The horse won by six lengths at Hollywood Park on the third trip. That horse just loved to run.”

Beyond Abrams's chronicled deeds that are now stamped into the dust of racing posterity, many point to a largesse and generosity of spirit that encompassed all, the less fortunate and the blue collar everyman that constitute racing's rank and file.

“Anybody could walk up to Barry and be part of the family,” said David. “At Del Mar he had an area where he sat–it was a table around which sat a bunch of guys, just the common gambler. Folks just having fun. There's Barry with a Grade I horse, and he doesn't go to the director's room. He sat back down there and made sure his family was all taken care of.”

Whether it was gamblers or racetrack patrons or those he'd known for years, “Barry felt obligated to help them out when they needed it,” said Auerbach. “He would give anybody the shirt off his back–he was that kind of guy.”

Abrams's father was a Polish holocaust survivor, his mother a Russian economist. The family emigrated to the U.S. in 1963. “We came with nothing,” said David.

If their mother had her way, Abrams would have charted a course into the less exotic realms of certified public accountants. But he caught the gambling bug early. “My mom almost had a heart attack when he quit school, laid carpet, then became a groom,” said David.

Abrams took out his training license in 1975. “When he first started, he only had I think four horses, and didn't have a groom. He did everything himself. He lost 28 pounds that first summer he trained on his own,” said David. “He just had a passion for horse racing.”

He also had a passion for the Lakers and wasn't shy about advertising it–the stakes-winning Lakerville, who he part-owned with the Auerbachs, would go on to earn more than $300,000 on the track.

“We asked the nurse last night to put the Lakers game on,” said David. “Ten minutes after they lost he passed away.”

“He was a fighter,” David added. “He knew. I saw him two days before and he knew. He wanted to tell everybody how much he loved them all, and how much we all meant to him.”