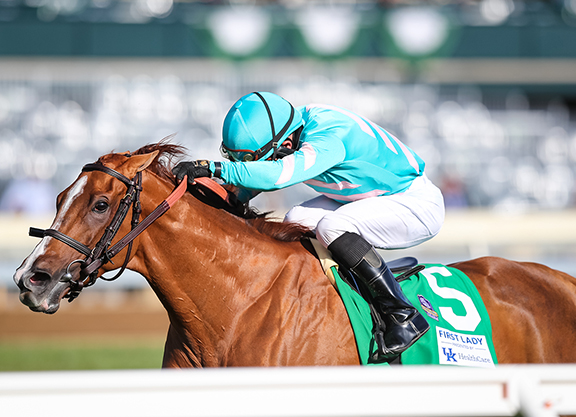 After Uni (GB) (More Than Ready)'s five-year-old campaign which concluded in the Champion Turf Female award, bloodstock advisors suggested to the partners in her ownership group that it might be time to retire and sell her. After all, the owners had probably already gotten more than they had bargained for: they  had campaigned her at 3, 4, and 5, and watched her win three Grade I stakes as well as Grade II, Grade III and Listed events.

But, “Sol and I are and Bobby are racing guys,” said Michael Dubb of the decision made by him and partners Sol Kumin and Bob LaPenta to bring her back for one more year. “We want to race and she's six years old now. Typically these broodmares are retired at five. And against the advice of bloodstock agents, we went ahead and raced her at six years old because we had so much fun winning the Breeders' Cup once with her, and so we said, “Why not try to do it again?” So she will be pointing to the Breeders' Cup at Keeneland–the mile race against the boys.”

The decision to keep her in training for one more year has already proven to be a sound one, as Uni picked up her fourth Grade I win in Keeneland's First Lady last out, had another Grade I placing earlier in the year, and has earned almost a quarter-million dollars in 2020. She'll head into the Breeders' Cup Mile as one of the top choices before selling at Fasig-Tipton November as Hip 228 for Elite Sales.

For Dubb, there's another reason to keep her around for this year's Breeders' Cup: he was unable to see her 2019 win in person, and instead watched it on his iPhone standing on 10th Street in Manhattan.

“I could not be there last year because it was my daughter's engagement party in New York City,” said Dubb. “I had to walk out of the restaurant and watch the race on my iPhone leaning on the hood of somebody's car. And fortunately, my son walked out to see what his crazy dad was doing and to see the bedlam that was ensuing on 10th Street when the horse crossed the wire and made that tremendous come-from-behind run. So that was truly the greatest moment, but there have been so many with Uni.”

Uni was bred by Nicolas de Chambure's Haras d'Etreham, and Dubb and Kumin bought into her early in her three-year-old year on the recommendation of Nicolas de Watrigant and Bradley Weisbord. She remained in France for her two races for the new ownership group, winning the Prix Matchem at Maisons-Laffitte against colts. Transferred to Chad Brown's barn at Belmont in June, 2017, she was third first out in the GI Belmont Oaks Invitational. The new owners bought out de Chambure, added Bob LaPenta to their group, and were off to the races.

Since that time, Uni has been consistently brilliant, winning four Grade Is, turning in a perfect four-for-four year in 2018, and was three-for-four in 2019 with a Breeders' Cup win. Overall, she has won 10 of 17 starts and earned over $2.5 million.

Her win in the Breeders' Cup Mile against males puts her in a rarefied air, as she joined some of the great race fillies and mares of all time in the feat, including Miesque, Goldikova and Tepin, becoming just the seventh filly or mare to win the race.

Her consistency and durability have been defining qualities, with her owners enjoying successful three, four, five and six-year-old seasons with her.

“We've watched and enjoyed Uni over an extended period of time,” said Fasig-Tipton CEO Boyd Browning. “She has maintained her form at the Grade I level for four seasons now. It was really interesting and really cool to see the performance that she put on recently in the First Lady, coming back and winning another Grade I in 2020 against an outstanding field. She's been durable, she's been consistent, but she's also been brilliant. Those are certainly some of the characteristics that everyone's looking for from a broodmare prospect with the potential that she would have on a long-term basis.”

Moreover, said Browning, she offers a rather unique pedigree.

“One of the things that's really intriguing about Uni is her pedigree,” he said. “Not only is she by More Than Ready, who's certainly become a sire who has had worldwide great success, both in the Northern and Southern Hemisphere, but she's out of a Dansili (GB) mare whose dam is by Generous. I think that you've got a really unique opportunity to kind of craft and create your own vision to utilize those bloodlines.

“It's a great outcross pedigree, and it's a family full of significant runners for many, many, many generations. But you've really got an opportunity to kind of put your fingerprint on it, and create a legacy that should hopefully endure for generations to come.”

For Dubb and his partners, though, enjoying her for these past four seasons has been the ride of a lifetime.

“Looking forward, we hope she can be a two-time winner against the boys of the Breeders' Cup Mile,” he said. “And I will be at the Breeders' Cup with my binoculars in my hands, cheering and clapping. But whether she does it or not, she has given us indescribable pleasure and joy.

“If you're in the game as long as I am,” Dubb said, “this kind of horse sticks out. She's really special. She's the horse of a lifetime.”