One Bad Boy Back for More in Prince of Wales 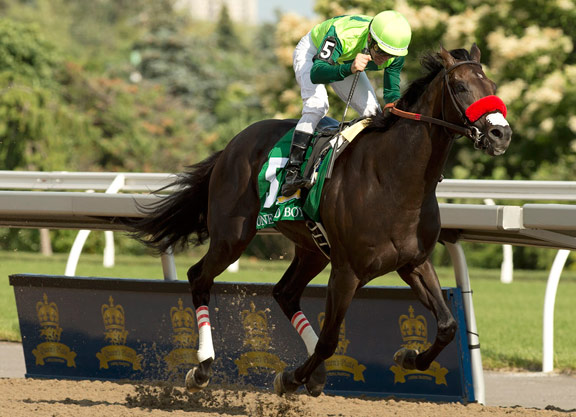 Sayjay Racing, Greg Hall and Brooke Hubbard's One Bad Boy (Twirling Candy), a 3 1/2-length winner of the June 29 Queen's Plate at Woodbine, will look to annex the second leg of Canada's Triple Crown when he goes postward in the Prince of Wales S. at Fort Erie Tuesday evening. The dark bay is the 7-5 morning-line favorite while facing just four rivals in the 1 3/16-mile race.

One Bad Boy has been training at Woodbine since the Queen's Plate and worked five furlongs over the track's Tapeta surface in 1:02.60 last Tuesday.

“He has been thriving at Woodbine,” said Hubbard, who has been in Toronto with the Classic winner for the last week. “He really loves the surface at the track and he's been doing great and staying fit.”

The Prince of Wales will be One Bad Boy's third start over a dirt surface. He opened his career with a pair of starts over the main track at Santa Anita, finishing second behind GI Kentucky Derby morning-line favorite Omaha Beach (War Front) in a Feb. 2 maiden special weight before graduating over the turf in Arcadia in April. He was second in the off-turf Alcatraz S. over the Tapeta at Golden Gate May 19 before travelling north of the border for the Queen's Plate.

Hubbard, who purchased One Bad Boy for $65,000 at the 2017 Keeneland September sale, said she didn't think the move back to the dirt Tuesday would be a problem.

“It's not really a concern for any of us,” she said. “We know that he trains well on the dirt and he's run fairly well on it. So we're just hoping that he is coming in in form, which we believe he is. The turf is definitely where we want to end up with him, but it's a fun thing to have a horse who is good on a variety of surfaces.”

The year before purchasing One Bad Boy, Hubbard had purchased the sophomore's half-sister Ms Bad Behavior (Blame) for $75,000 at the 2016 Keeneland September sale. That filly, now a stakes winner and five-times graded placed, had only made two starts when her half-brother went through the Keeneland sales ring in 2017, but Hubbard had seen enough to want to check out the yearling.

“I originally bought his sister and so I had to go and see him,” Hubbard recalled. “He has a lot more leg than his sister and he had a really great walk. Those were the two things that I liked the most about him.”

The Fort Erie's compact field is not short on talent, according to Hubbard.

“It's a pretty salty field for how small it is,” she said. “We are feeling fairly confident, but you can never be too confident. It is horse racing.”

One Bad Boy faced all four of his Prince of Wales challengers in the Queen's Plate. Ivan Dalos's Avie's Flatter (Flatter), last year's champion 2-year-old and runner-up in the first leg of the Canadian Triple Crown, is 5-2 on the morning line. The colt, winner of the Apr. 5 GIII Transylvania S. at Keeneland, worked five furlongs over the Fort Erie surface in 1:00.20 July 11.

“Avie's Flatter skipped over the track and seemed very comfortable,” trainer Josie Carroll said of the local work. “He's a very consistent horse across every surface.”

“I'm glad we brought him down,” Carroll said. “Patrick Husbands worked him and said he was a little lost on the track because he likes to take a look at everything, so his time wasn't very fast, but Patrick loved the way he got across the track.”