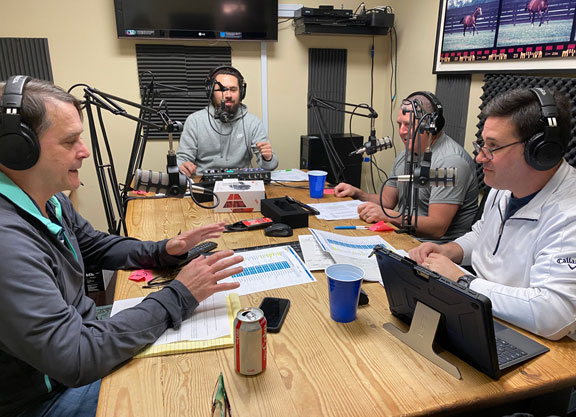 Dennis Albaugh didn't want to spend $1 million to acquire Thousands Words (Pioneerof the Nile) at the 2018 Keeneland September sale. Albaugh is among the wealthiest people in the sport, but even he has a comfort zone, and says he normally doesn't go beyond $400,000. But, if you want something special, you have to pay for it. And Albaugh and his team of advisors thought Thousand Words was the kind of can't-miss prospect every owner yearns to have.

“Normally, we try to find horses in the $200,000 to $400,000 range,” said Albaugh, who was this week's Green Group Guest of the Week and owns Thousand Words in partnership with Spendthrift Farm. “But those are getting harder to find when you are in Book 1 and Book 2. Thousand Words came along and we thought this horse could be a stud because his breeding was excellent and looks-wise he's unbelievable. We went a lot further for him than we normally do.”

It looks like it was money well spent. Thousand Words is three for three and is considered a top threat for the GI Kentucky Derby. Then again, he might not be Albaugh's best 3-year-old. Holding as strong a hand as any owner in the country, Albaugh also has Dennis' Moment (Tiznow), the likely favorite in Saturday's GII Fasig-Tipton Fountain of Youth S. at Gulfstream. He was the favorite in the GI Breeders' Cup Juvenile, but lost all chance when stumbling at the start.

During the podcast, which is sponsored by Keeneland, Albaugh was asked which of the two is better. He took a pass.

“That's a question I have been thinking about a lot,” he said. “They have different running styles. Dennis' Moment gets out there and goes hard and fast. Thousands Words doesn't come out of the gate fast but he has a stride that is unbelievable. I'd be very happy if either one of them won the Derby.”

Albaugh said that Thousands Words will likely start next in the GII San Felipe S. Mar. 7 at Santa Anita.

This week's News of the Week segment, sponsored by West Point Thoroughbreds, included a look at the Saudi Cup and whether it is good or not good for American racing. The writers also gave their thoughts on the passing of A.P. Indy and who might win the Fountain of Youth. Click here to listen to the podcast.