On Aftercare: Cannon Chorus Finds His Purpose Helping Others 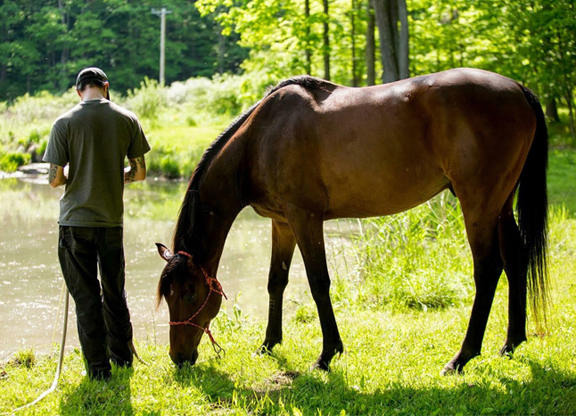 Cannon Chorus (War Chant) is 17 hands and beautiful. He sold at Keeneland September for $150,000 in 2004 and raced only once finishing sixth. The road had some twists and turns but now, in his third career as the go-to horse for the team at Long Shadows Charitable Foundation Farm in Cambridge, NY, he is a champion.

Cannon started his journey in helping veterans and others in need with Hall of Fame jockey Julie Krone.

“Cannon retired from racing at three and was jumping junior Grand Prix fences at four, albeit not willingly,” explained Krone. “His owner received an urgent call that Cannon needed to be picked up from the show barn immediately or he was basically going to be stolen because of a domestic dispute. A minute later, I happened to walk by and he begged me to go get him.”

“If I hadn’t walked by, who knows what would have happened,” she added. “When we got to the barn the next day, I was shocked to see a beautiful but dangerous horse with scars from spurs, wearing a muzzle. It took hours to get him on the trailer.”

Julie had retired from riding races but not from a lifetime of saving and caring for horses. After leaving the track, Julie honed her already natural horsemanship with the Parelli program. For Cannon, this was another crucial bit of serendipity. His striking good looks and athleticism induced the people in his life to push him and he reacted by becoming aggressive and increasingly more dangerous.

“I am so grateful to Pat Parelli, Amy Bowers and Margit Deerman, other Parelli teachers, who saw the horse that Cannon could be and helped me turn him around,” added Krone. “It took intensive training and years.”

“He was kind of a nightmare,” said Deerman who works with difficult horses in California. “He was extremely defensive and he would come at you with his mouth. He seemed mad at life.”

Currently, Cannon is entrusted to Julie’s friend and former student Tabitha Morgan and Tabitha’s husband Mike Morgan. Tabitha currently oversees the care of all of the horses at Long Shadows Farm and the programs teaching horsemanship and equine-assisted learning for people coping with challenges like PTSD, addiction and abuse.

For Mike Morgan, a U.S. Marine who served two difficult tours in Afghanistan between 2006 and 2008, Cannon provides solace and escape from the ravages of his combat-induced PTSD.

“Cannon is my rock,” says Morgan. “I seek him out when my mind is spinning and I cannot find peace. I just get into his space and he seems to feel what is going on with me. He lets me stay close and eventually, I settle into his breath and his heartbeat.”

Cannon appears extremely confident and is reliably calm. His old ways of biting, kicking and lunging at people are almost impossible to imagine. He is a different horse. Consequently, he has many jobs on the farm. He is the babysitter for the many new Thoroughbreds that come to the farm off the track for retirement or rehabilitation. And, he is often the horse given to the person with no horse experience arriving at the farm for lessons or help through horsemanship.

In a relatively new program for young people receiving residential treatment for substance abuse, Cannon is a star. His calm demeanor and willingness to wait for his class partner to work through his or her fear or emotions before cueing him is invaluable. The second he responds is often a break-through moment for the person.

For veterans like Morgan, his time and work with horses addresses a number of issues.

“As a U.S. Marine and combat veteran, I carry huge burdens and in learning to partner with a horse, teach him and lead him, without feeling like I was burdening him, was a really important lesson,” explains Morgan. “In life, we have to learn to share our burdens, let them go and partner willingly with the people we care about.”

“For a long time, I was unable to do that and Cannon would not take me seriously,” he added. “Julie coached me into opening up to Cannon’s side of the equation and asking him in an honest way to respect me and trust me in our activities. It changed our relationship and it changed me.”

Another issue that combat veterans often battle comes from spending months or years as part of a mission, often with life or death consequences, and the huge feeling of responsibility that goes along with that which disappears once they return home. It creates a void. Caring for horses and engaging in activities with horses can replace some of those feelings. Often, horses in programs for veterans are rescued horses or horses that have had trauma in their lives. We see time and again how horses have a profound effect on people and veterans often find the sense of purpose for which they were searching.

“Because of how Cannon was when he first came to me, I am moved to tears when I see the work that he does now with little kids, beginner riders and the relationship that Mike has built with him,” says Krone. “What horses see in people or feel is hard to explain, especially in scientific terms. But sometimes you see a horse’s response or a sense of connection that is so real, it needs no explanation.”