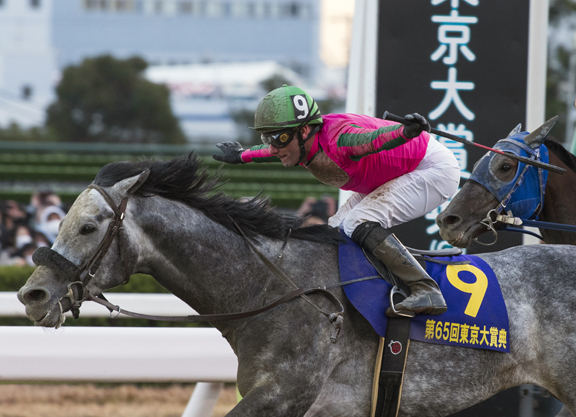 Omega Perfume (Jpn) (Swept Overboard), arguably the best Japanese dirt horse not named Chrysoberyl (Jpn) (Gold Allure {Jpn}), has drawn nicely in gate seven of 16 as he goes for a third consecutive victory in Tuesday's G1 Tokyo Daishoten, the final top-level event for 2020 and the lone race at group level held on the National Association of Racing (NAR) circuit.

The 5-year-old gray defeated Nonkono Yume (Jpn) (Twining) by a length in defence of his title 12 months ago and won the G3 Keian Hai at Kyoto first off the layoff this past May. He found Chrysoberyl a touch too strong when second to the champion dirt horse in the June 24 Teio Sho and Nov. 3 JBC Classic, but in that one's absence, he is hands down the one to beat. Mirco Demuro rides.

Omega Perfume's first Daishoten came as a 3-year-old and the sophomore set looks well represented here as well. The American-conceived Danon Pharaoh (Jpn) (American Pharoah) won the Japan Dirt Derby over this course and distance in July and bounced back from a fifth in the JBC Classic to take out the Listed Urawa Kinen (2000m) Nov. 25. T O Keynes (Jpn) (Sinister Minister) has won half of his six starts this season and exits a near-miss second in listed company at Hanshin Dec. 20. He should enjoy the run of the race from gate one.

Mutually (Jpn) (Pyro) has missed the top three only once from seven runs at Ohi and came from well back to finish a respectable fourth when last seen in the JBC Classic.