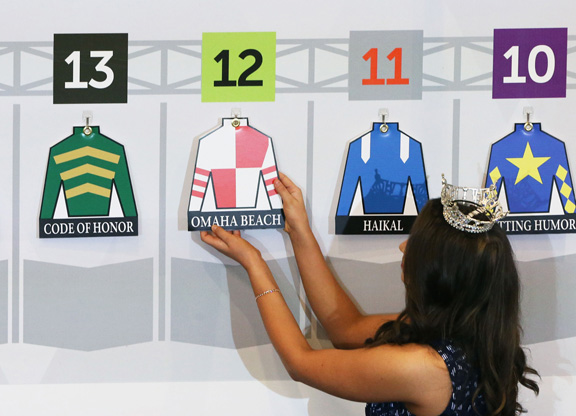 The field is set for the 145th Kentucky Derby | Coady

LOUISVILLE, KY – Post positions three and 12 were the only two stalls remaining of 20 when Omaha Beach (War Front)’s name was called by announcer Travis Stone as the draw for the 145th GI Kentucky Derby rolled along before a packed house in the Aristides Lounge at Churchill Downs late Tuesday morning.

It was the latter slot that was assigned to Fox Hill Farm’s streaking GI Arkansas Derby winner, tabbed as the 4-1 morning-line favorite by Mike Battaglia, at the traditional pill pull.

Hall of Fame trainer Richard Mandella is a well-documented 0-for-six in the ‘Run for the Roses,’ with his best finish a fifth-place effort from Soul of the Matter back in 1994. He most recently saddled Action This Day (sixth) and Minister Eric (16th) in the 2004 Kentucky Derby.

Was that the post Mandella preferred of the two that remained?

“Yeah it was, but none of the posts were bad,” Mandella said. “You’re just lucky to be here for the Derby. Mike [Smith] will probably let him run out of there, and having the 12 post, he’ll have the option of being able to size up how fast they’re going and he’ll use his best judgement.”

Roadster turned in an impressive stretch rally to defeat stablemate Game Winner by a half-length in the GI Santa Anita Derby. With Smith opting for Omaha Beach, Roadster will be piloted for the first time by Florent Geroux.

Last year’s GI Los Alamitos Cash Call Futurity winner Improbable was second-best to Omaha Beach with first-time blinkers in the Arkansas Derby after losing his cool in the starting gate. The shades will come off Saturday.

“Anything but the one or two, I’m fine with that,” Baffert said of the draw. “I think the good horses all drew well. There are a lot of nice horses in this race. Omaha Beach, he deserves to be the favorite. We’ll just see how it plays out.”

Juddmonte Farms will be represented by GII Wood Memorial S. hero Tacitus (Tapit), who will break from post eight with Jose Ortiz in the irons. The homebred son of champion Close Hatches (First Defence) is listed at 10-1 on the morning line.

Backstretch buzz horse By My Standards (Goldencents), upset winner of the GII Twinspires.com Louisiana Derby, drew post three and is quoted at 20-1.

Gary Barber’s War of Will (War Front), a very disappointing ninth as the 4-5 chalk after suffering a minor muscle strain soon after the start in the Fair Grounds centerpiece, drew the dreaded rail. He previously annexed the GIII Lecomte S. and GII Risen Star S. in impressive fashion.