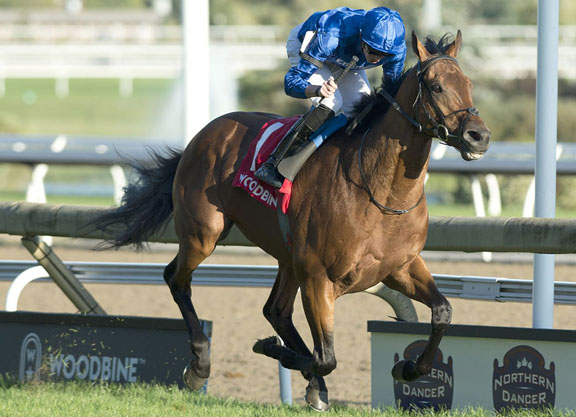 Godolphin’s Old Persian (GB) (Dubawi {Ire}) made 65 cents on the dollar look like an absolute gift, taking over at will in upper stretch before proving a much-the-best winner of Saturday’s GI Northern Dancer Turf at Woodbine. The race is the course-and-distance prep for next month’s GI Pattison Canadian International S.

A bit slow to begin from the inside stall, Old Persian and James Doyle mustered a bit of speed to be up into third turning down the side of the track as Cooler Mike (Giant Gizmo) opened up by the better part of 15 lengths in the opening six furlongs. The front-runner’s advantage was dwindling away rapidly as the field approached the half-mile marker, and Tiz A Slam (Tiznow)–winner of the GIII Singspiel S. and GII Nijinsky S. over the track and trip in his two most recent appearances–was the first to come calling for the lead inside the final three furlongs. But knowing full well that he was aboard a superior stayer, Doyle allowed Old Persian to claim Tiz A Slam in upper stretch and powered home to score as much the best as the heavy favorite. Nessy (Flower Alley), a full-brother to 2017 Canadian International romper Bullards Alley, was up late to take a photo for second, while Focus Group (Kitten’s Joy) just managed to touch Tiz A Slam out of third. Old Persian was providing James Doyle with a first North American Grade I victory.

Fifth in the 2018 G1 St Leger exactly one year ago Saturday, Old Persian had to call upon all his class to win the G2 Dubai City of Gold S. on seasonal debut Mar. 9, overcoming a world of traffic at the 300-meter mark to score by a nose. After besting the Heart’s Cry (Jpn) duo of Cheval Grand (Jpn) and Suave Richard (Jpn) in the G1 Dubai Sheema Classic Mar. 30, Old Persian was a low-odds seventh in the G1 Investec Coronation Cup over the tricky Epsom layout May 31 and was a latest third in the G1 Longines Grosser Preis von Berlin Aug. 11.

“He didn’t run great in the Coronation back at Epsom there after a good run in Dubai,” said Alex Merriam, assistant to trainer Charlie Appleby. “We were pleased enough with his run in Germany and I think the ground was a bit on the soft side for him there. But James gave him a nice ride today and it worked out well.”

Old Persian could yet make another appearance in Greater Toronto this season.

“Not quite sure at the minute,” offered Merriam. “I spoke to Charlie and he said we’ll go back to Europe, see how he is, see how he comes out of the race and make a plan from there. No immediate plans at the minute.”