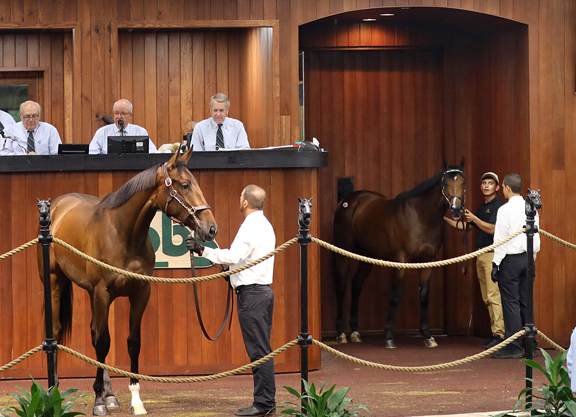 The Ocala Breeders' Sales Company's July 2-Year-Olds and Horses of Racing Age sale, the last of the company's traditional three juvenile auctions which this year have all been billowed and buffeted by the ongoing coronavirus pandemic, gets underway Tuesday morning at 10 a.m. OBS staged its March sale  just as the pandemic was causing mass shutdowns and economic upheaval across the globe and, at the close of business, the two-day auction had suffered across-the-board declines and a buy-back rate of 40%. The OBS Spring Sale, pushed from its normal April dates to mid-June, seemed to fare better as racing began opening up again, with a buy-back rate of just 19%, albeit with a significant number of horses scratched from the catalogue. The July sale, which is being held a full month later than its originally scheduled date, comes as summer racing heats up at the marquee Del Mar and Saratoga meets, but uncertainty still looms as virus cases continue to spike in some parts of the U.S.

“We are starting to see more racing around the country and we are glad to see racing going forward,” said OBS Director of Sales Tod Wojciechowski. “But we are still dealing with a level of uncertainty. What you hear every day on the news isn't necessarily helpful to our cause, but we've got a good group of horses here and if somebody needs a 2-year-old, there are plenty of them here.”

OBS unveiled its online bidding platform during the Spring Sale and is expecting increased internet participation at its three-day July sale.

“I think we've created a great avenue for buyers, in the event that they are not comfortable traveling or are unable to travel, with the online bidding,” Wojciechowski said. “That proved to be wildly successful in the first sale and I think it will become a bigger part of the process moving forward. There have been more registrations [ahead of the July sale] and even anecdotal information with people saying, 'Hey, I am not going to be able to make it down, but I plan to bid online,' and 'I've got somebody there looking at horses for me.'”

“I thought the under-tack show went very well,” Wojciechowski said. “Nobody sells more 2-year-olds or breezes more 2-year-olds anywhere in the world than OBS. Nobody has six-day breeze shows or seven-day breeze shows. For us to be able to maintain a fair surface for six or seven days in a row, dealing with variable conditions, with the heat, the rain and the wind, all of those things. I think it was a very fair breeze show from day one to day six.”

Consignors will have another opportunity to sell 2-year-olds at OBS this year. The company has added a 2-year-olds in training session to its October Yearling Sale.

“There has been a lot of positive feedback from consignors on it and we are definitely having a 2-year-old section in our October Yearling Sale,” Wojciechowski said.

The July sale will run Tuesday through Thursday with bidding beginning each day at 10 a.m.