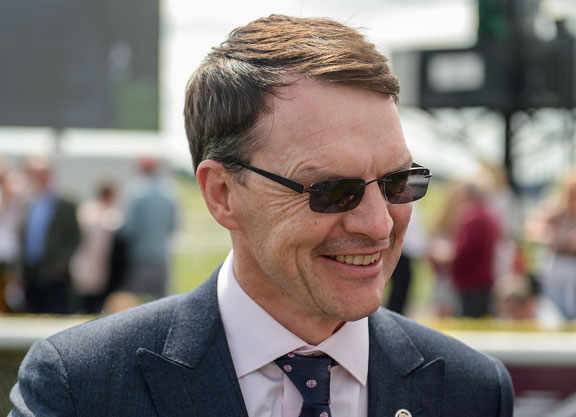 O'Brien has not been shy about trying the Classic in the past and he looks for his first win in the $6-million race, having suffered narrow defeats with the likes of Giant's Causeway and Declaration of War.

“He is very like Giant's Causeway,” the trainer said of Churchill. “He is a miler that you would like to think will get a mile and a quarter. He is big and powerful, like those dirt horses.”

O'Brien said of his juvenile race contenders, “Happily had a little bit of a blip before her last run [when scratched from the Fillies' Mile], but she seems to be fine now. After a few days she was fine and all her bloods seem to be fine now. We were delighted with her on Arc day.”

“September had a nice run in the Fillies' Mile,” he said. “She ran a very good race [to be beaten a nose for second], but she didn't get a clear run. She is by Deep Impact and I think they handle quicker ground. She had a few lesser runs in between, but her last run she was coming back after a little break and the ground was a little slower as well.”

“Mendelssohn and US Navy Flag are in both races [Juvenile Turf and Juvenile],” O'Brien said. “US Navy Flag would have the option of either and he could go on to the dirt. Mendelssohn would not have the experience of him and would probably go on the grass, but I am not sure which way yet.”