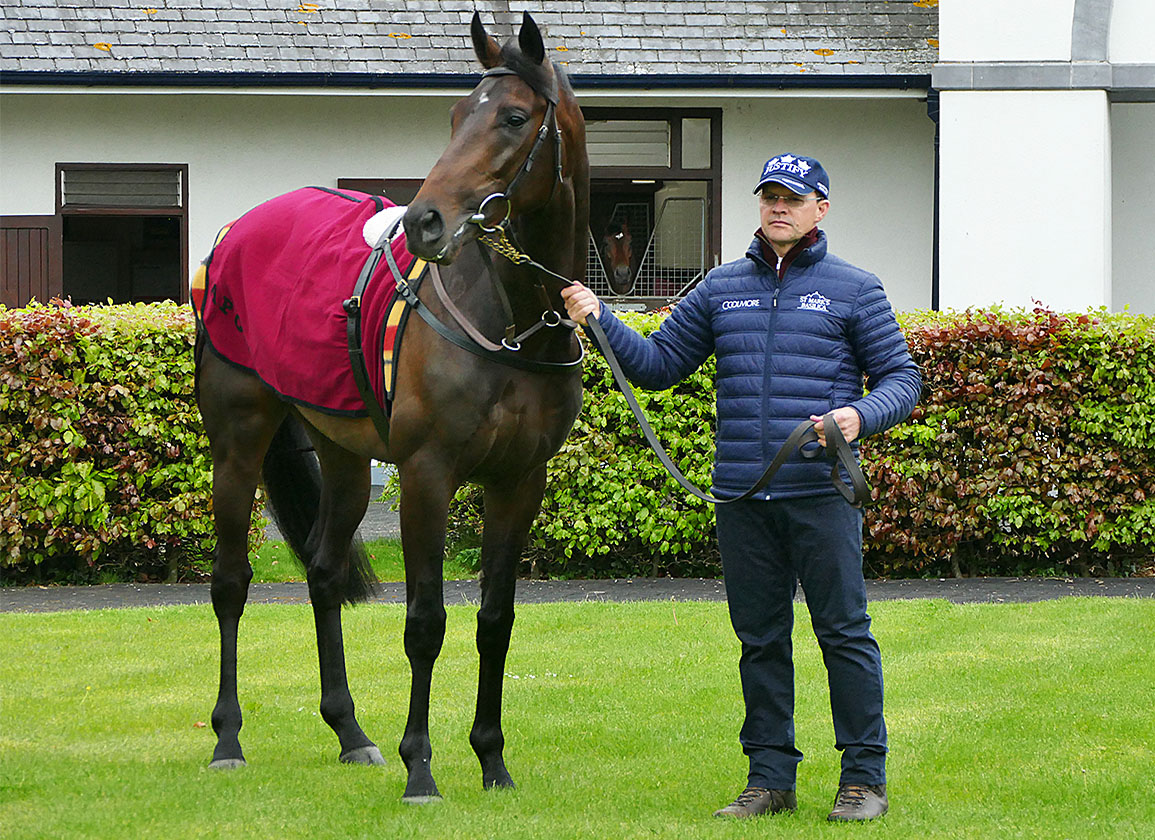 ROSEGREEN, Ireland–Ryan Moore will find it difficult to ride anything other than Stone Age (Ire) (Galileo {Ire}) in the Cazoo Derby, according to Aidan O'Brien, who may be without the ace–Luxembourg (Ire) (Camelot {GB})–in his Epsom pack, but expects to run up to six colts as he bids for a record-extending ninth win in the race on June 4.

Stone Age didn't just open the door to a tilt at the Derby in winning the G3 Derby Trial at Leopardstown on Sunday, he kicked it open and announced himself as a leading player in demolishing the field and skyrocketing to a general 5-2 favourite for Epsom glory in the process.

O'Brien's breakthrough Derby winner, Galileo (Ire), charted a similar path to Epsom by winning that same Derby Trial at Leopardstown, and the master of Ballydoyle admits it could be hard for Moore to ride anything other than Stone Age next month.

“I think he [Ryan] would find it hard to not ride the horse from yesterday [Stone Age],” O'Brien said on Monday. “I imagine Ryan will find it hard not to ride him.”

The long-time ante-post favourite for the Derby, Luxembourg ran a cracker to finish third in the 2,000 Guineas but has been ruled out until at least the autumn after picking up a muscular problem behind.

O'Brien explained, “I am disappointed for the lads. He is a very good horse. I don't think Ryan would have had a choice to make if he were fit.”

When a comparison was made between Luxembourg and St Nicholas Abbey (Ire), O'Brien added, “He probably has more scope than St Nicholas Abbey had. St Nick ran well in the Guineas [sixth] as well but he didn't run as well as this lad did. Luxembourg ran extremely well to make the ground up and finish third. We didn't really see what he was able to do.”

Despite not managing to win in five starts at two, O'Brien outlined how that experience stood to the new Derby favourite Stone Age, who is now unbeaten in his two starts this term and heads to Epsom as the leading Ballydoyle challenger.

O'Brien said, “It'd be hard not to be impressed with what Stone Age did at Leopardstown. You'd like to have something lead him but there was no point in messing him about. Ryan let him bowl along and he was very impressive.

“He has a lot of experience from his juvenile days. He was happy to get a lead at two. He'd have learnt a lot at two. We were running him and teaching him. He learnt a lot in those races.”

It seems somewhat ironic that O'Brien will face some of the stiffest competition in the Derby from his son Donnacha who appears to have outstanding claims of making his own breakthrough in the race with impressive Ballysax winner Piz Badile (Ire) (Ulysses {Ire}).

Respecting the opposition, O'Brien said, “We always do our best to win no matter what. I am always happy if they [Donnacha or Joseph] beat us. They are rivals, one hundred per cent, but I am always delighted when we get beaten by them. Believe me, there's no inch given anywhere.”

O'Brien also holds the key to the Oaks and nominated Tuesday (Ire) (Galileo {Ire}), a sister to Minding (Ire) and the general 7-2 favourite for the race, as the pick of his team for the fillies' Classic.

Tuesday overcame inexperience to finish strongly for third in the 2,000 Guineas at Newmarket and O'Brien is convinced that there's more to come.

He said, “Tuesday doesn't turn three until the first week in June and, to be doing what she's doing is unreal. Her run in the Guineas would suggest that she's crying out for a step up in trip. She's still only a baby and we are thinking of running in the Irish Guineas and then going on to the Oaks, just like what Minding did.”