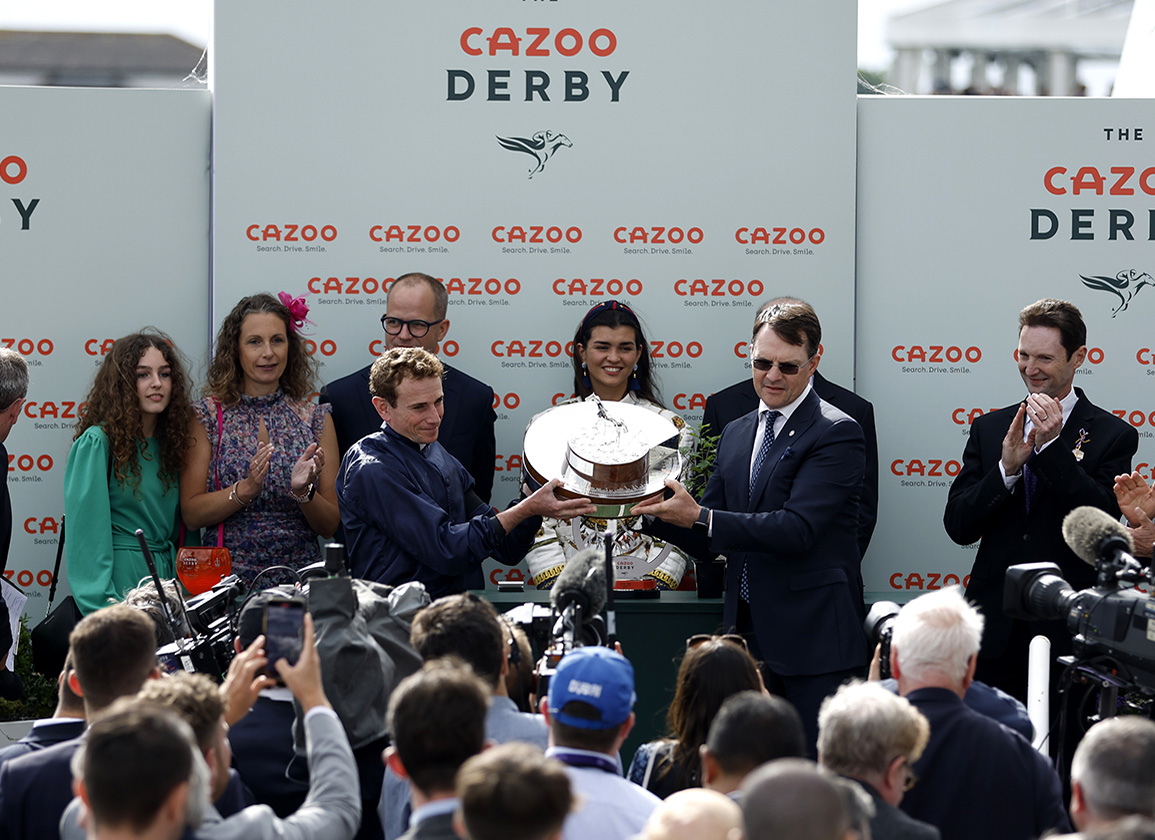 EPSOM, UK–Just when we thought there was nothing new to say in praise of Aidan O'Brien, up he jumps to break a 159-year-old record for the number of British Classic winners by a trainer.

It took the previous record-holder John Scott 36 years to amass his 40, and O'Brien has reached his tally of 41 in just 23. After an opening brace in 1998, when King Of Kings (Ire) won the 2000 Guineas and Shahtoush (Ire) gave the trainer the first of his 10 Oaks victories, the Ballydoyle maestro had to wait another three years before bagging another Classic in the UK, but what came next was the horse who would change the course of modern-day Thoroughbred breeding.

In 2001, Galileo (Ire) cruised to glory in the Derby–bringing about an important first for his extraordinary sire Sadler's Wells as well as his trainer. His own exploits at stud have been well documented in the intervening years, and just within his own former stable, 17 of O'Brien's British Classic wins have been recorded by sons and daughters of Galileo. He only relinquished the champion sire's crown last year for the first time in 11 successive seasons (12 in total) to his son Frankel (GB), considered by many to be the horse of a lifetime.

Galileo's death last year at the age of 23 of course brings about a gradual closing of a truly vital era of bloodstock for those of us who have been fortunate enough to live through his supremacy. But his name continues to loom large, in racecards, in racing's history books and now, deservedly, in British racing's Hall Of Fame, into which he was the most recent inductee just last week. In the post-Oaks press conference sat MV Magnier, Michael Tabor, and Aidan O'Brien, three names intrinsically linked to the great horse who fittingly helped to push his trainer to a new benchmark courtesy of his daughter Tuesday (Ire).

“I can't even put it into words how much this horse has meant to us,” said Magnier in tribute to Galileo. “He has changed a lot of people's lives. It's not just us, he has affected a lot of people.

“I remember my father saying that Sadler's Wells's record was never, ever going to be repeated and couldn't be bettered, but Galileo has managed to do that. Those Galileo mares, they are so tough, and for everything he has done we have a lot to be grateful for.”

Magnier was also not stinting in his praise of O'Brien. He said as the trainer walked into the press conference, “I was hoping he was not going to hear me say this but he is an incredible man. All that he has achieved to date is incredible. He works harder than anybody I've ever met in my life and he deserves everything he gets.”

Tabor agreed. “It is just a work ethic which is non-stop,” he said. “I guess it's like baking a cake. You need every ingredient to make it a cake that you really want, and if you are lacking any ingredient then it's going to be ok but you are not going to reach the pinnacle.

“And I do feel that every ingredient, from what John Magnier has built that over the years, has made Ballydoyle the place it is, so that it has every facility possible to get the best out of those pedigrees. And don't forget that John selected Aidan when he was just another trainer, but he could see what he was achieving from nothing, and he made the appointment and it has been a success story ever since.”

Tabor added, “As I say, you need all the ingredients, and the pedigrees are so important, there's no question about that.”

Tuesday's pedigree is already eminently familiar to those who have been following the Classic scene in recent years, for she follows her sister Minding (Ire) in winning the Oaks. That great filly had already won the 1000 Guineas and been beaten a head into second in the Irish 1000 Guineas when she triumphed at Epsom, and, having gone up the distance scale, dropped back down during her 3-year-old season to add the Pretty Polly, the Nassau and the Queen Elizabeth II S. to her incredible year. Last year another sister, Empress Josephine (Ire), won the Irish 1000 Guineas, while Tuesday, a rare June foal, has also placed in both Guineas en route to her own Classic success.

“Today is her birthday,” said Magnier of Tuesday, who is a full four months younger than the eldest filly in the Oaks, Rogue Millennium (GB). “And the biggest thing that you can take from that is that we are just going to keep covering mares for a lot longer. She's a very nice filly and all of that but she is only three today and she has just won an Oaks. I think people are just thinking too much towards the sales-ring but this just goes to show you that you can keep covering your mares [later in the season].”

O'Brien added ominously, “She's not three until today and she's [won] after running in two Guineas already. It's very hard to quantify but it's quite possible that there's a lot more to come from her.”

So speaks the man who, at 52, can still be regarded as something of a precocious talent himself. He may already have rewritten the record books, but it is safe to assume that there is still also plenty more to come from Aidan O'Brien, perhaps even as soon as Derby day.