'Oath' No Secret, But Measuring Her Talent a Pleasant Conundrum 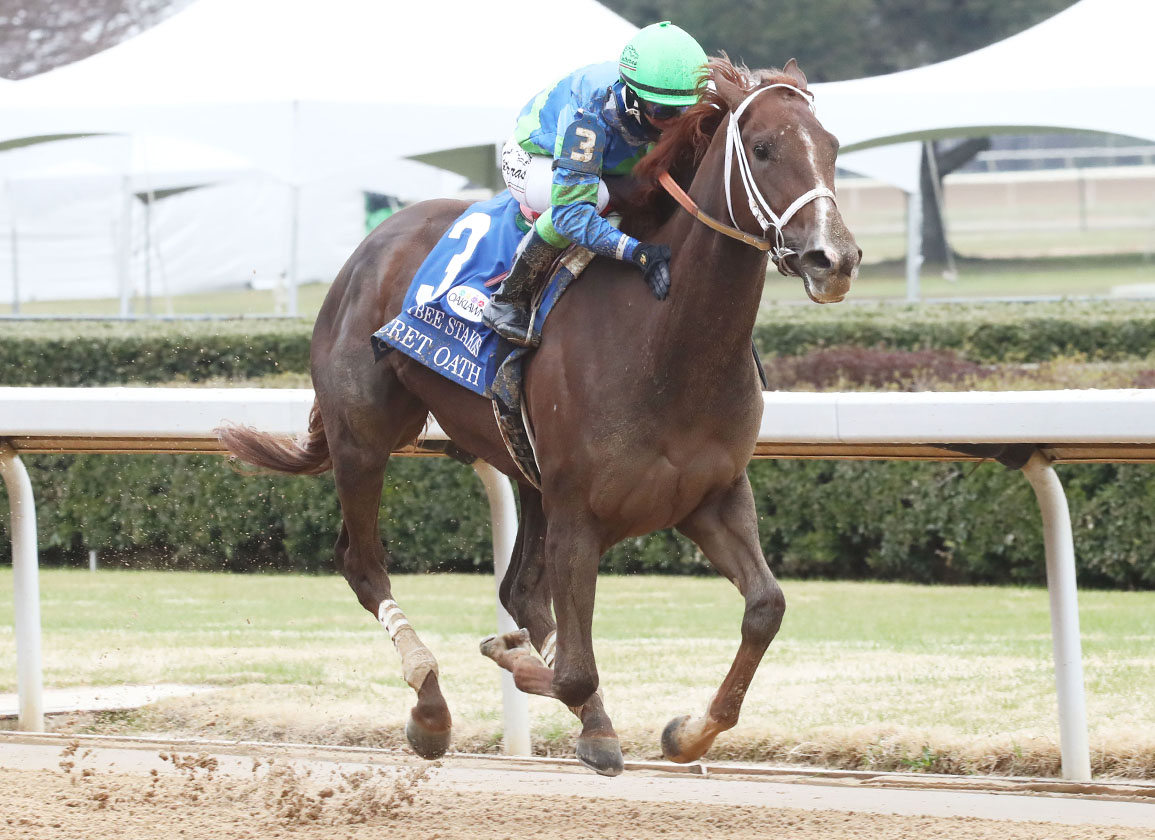 Secret Oath (Arrogate)'s big winning move despite trip trouble in Saturday's GIII Honeybee S. at Oaklawn Park launched the 3-year-old filly to the forefront of conversation just at the precise time the sport needs a little diversion from anything having to do with lawsuits, trainer banishments, and the GI Kentucky Derby.

There is no question that the D. Wayne Lukas trainee looms large atop the leaderboard for the GI Kentucky Oaks and that her 86-year-old conditioner isn't crazy for at least considering running her against males next time out in the GI Arkansas Derby.

But if you want to drill down for a more precise prognostication as to where Secret Oath truly ranks in the always-intriguing fillies vs. colts debate and if she might be good enough to run in the Derby instead of the Oaks, you're going to have to come up with a measuring stick that doesn't appear to be available at the moment.

Comparing her 7 1/4-length Honeybee romp against the performance of males in the GII Rebel S. three hours later on the same Oaklawn card is a non-starter. The Rebel rates as the “chaos race” of the season so far among Derby preps because the 4-5 favorite was a no-show in an otherwise so-so field, and the slowly-run race was won by an improbable one-eyed gelding who paid $152.80.

Likening Secret Oath to Althea, the champion filly for Lukas four decades ago who also raced at Oaklawn (and beat the boys in the Arkansas Derby) should also be a no-go, at least for the time being. Obviously, Althea is from a much different generation. But even then, she was such an anomaly that her past-performance block reads like that of a racehorse from an entirely different planet when you consider how often Lukas raced her and how early in her career she lined up in the starting gate against males.

We'll have to let the next few weeks be the chief determinant in how Secret Oath's story arc plays out, knowing that whichever path Lukas sends her down, her next start is going to have a “circle the date” aura surrounding it.

Secret Oath entered the Honeybee with a 3-for-5 record, having won a Dec. 31 allowance race and the Jan. 29 Martha Washington S., both at Oaklawn, by a combined 15 1/2 lengths. She got pounded to 3-10 favoritism Saturday and appeared content to be last away in the Honeybee, given her natural running style as a stalker/closer.

Jockey Luis Contreras allowed the Briland Farm homebred to creep closer down the backstretch through opening quarters of :23.15 and :23.92, a brisk pace that seemed to be working to Secret Oath's off-the-pace advantage. But by the far turn, Contreras's patience contributed to his filly getting pocketed behind the two caving speedsters while an advancing rival to the outside kept the favorite locked and blocked, forcing Contreras to snatch up the reins in a ride-the-brakes type of maneuver.

Five sixteenths out, Contreras realized he had no choice but to dive inside of the tiring leaders. And when Secret Oath saw a glimmer of daylight through that narrow gap, she kicked on like a pro at the head of the lane. Never seriously threatened through the stretch, she won while kept to task but never fully extended.

Secret Oath's final time of 1:44.74 for 1 1/16 miles translated to a Beyer Speed Figure of 92, one point shy of her career-best effort. It's worth noting she carried five pounds more than the second- and third-place fillies.

Lukas indicated post-race that Secret Oath is nominated to both the Arkansas and Kentucky Derbies. The GIII Fantasy S. on the Apr. 2 Arkansas Derby undercard would be the conservative against-fillies option if he opts not to take on the boys.

Advocates for running in the Arkansas Derby will point out that Secret Oath's clocking and speed number trumped what was to follow six races later in the companion stakes for 3-year-old males. Oaklawn's third race in its quartet of Kentucky Derby points-earning preps is usually a pretty intriguing affair. But this year it might go down as the aberrational “Rebel without a cause,” which is why it's best to hold off on any claims that Secret Oath would have crushed that field had she been entered in that spot instead.

Rain had moved into Hot Springs by the time the feature race arrived, and although the track was still listed as “fast” for the Rebel, it would soon require sealing and a downgrade to “sloppy” for the final race. The un-California-like conditions would be eventually cited as a possible excuse for trainer Bob Baffert's ship-in fave Newgrange (Violence), who appeared primed to pounce after a trouble-free stalking trip but instead retreated to sixth.

The 75-1 Un Ojo (Laoban) saved ground every step of the way, rallied briefly at the quarter pole, then appeared to regress. But Un Ojo re-awakened late with an out-of-nowhere spurt of energy to snatch victory from the 15-1 Ethereal Road (Quality Road), who had been ambitiously entered by Lukas off a 19-1 maiden win in career start number four. The final time was 1:45.69, nearly a full second slower than Secret Oath's clocking; the Beyer (84) was also eight points lower.

Ethereal Road gave up serious real estate while hooked four wide on both turns, yet led from the quarter pole until 50 yards from the wire. He certainly punched his ticket to the Arkansas Derby, leaving Lukas to ponder over the next month whether he wants both his top filly and top colt aiming for the same race.

In the meantime, expect those comparisons to Althea to percolate–even if they're still off the mark.

Althea broke her maiden on June 22, 1983 at Hollywood Park. She ran second 17 days later in the GII Landaluce S., then wheeled back two weeks after that, beating the boys by 10 lengths in the GII Hollywood Juvenile Championship. When the racing switched to Del Mar, Lukas continued the pattern of aiming Althea against both fillies and colts, and she responded by winning both the GII Del Mar Debutante (by 15 lengths) and the GII Del Mar Futurity, just 10 days apart.

After a mix of firsts and seconds against fillies at Santa Anita in the fall, Althea closed out her 2-year-old season by attempting the mixed-sex Grade I double of the Hollywood Starlet (first) and Juvenile (sixth). Althea started 1984 with Santa Anita stakes victories against fillies, then shipped to Oaklawn for the Fantasy, where she finished a fast second despite encountering significant trip trouble.

Back then, the Fantasy was run the week before the Arkansas Derby. Lukas spent most of that week saying he wouldn't enter Althea against the boys. He did anyway.

Althea toyed with the Arkansas Derby field, drawing off to win by seven lengths while equaling the track record at the time. Afterward, Lukas admitted he had planned all week to run his star filly in that spot, but that he had chosen not to tell anyone until the day the race was drawn.

Thirty-eight years later, on the day after Secret Oath's win, Lukas remained uncommitted to a plan beyond saying he'd take it one race at a time.

Sunday, Lukas at first told the Oaklawn notes team that “I don't know what we're going to do,” before later adding, “Right now, she would be in the Fantasy and Ethereal Road would be in the [Arkansas] Derby.”

But you never know. The man is entitled to change his mind.