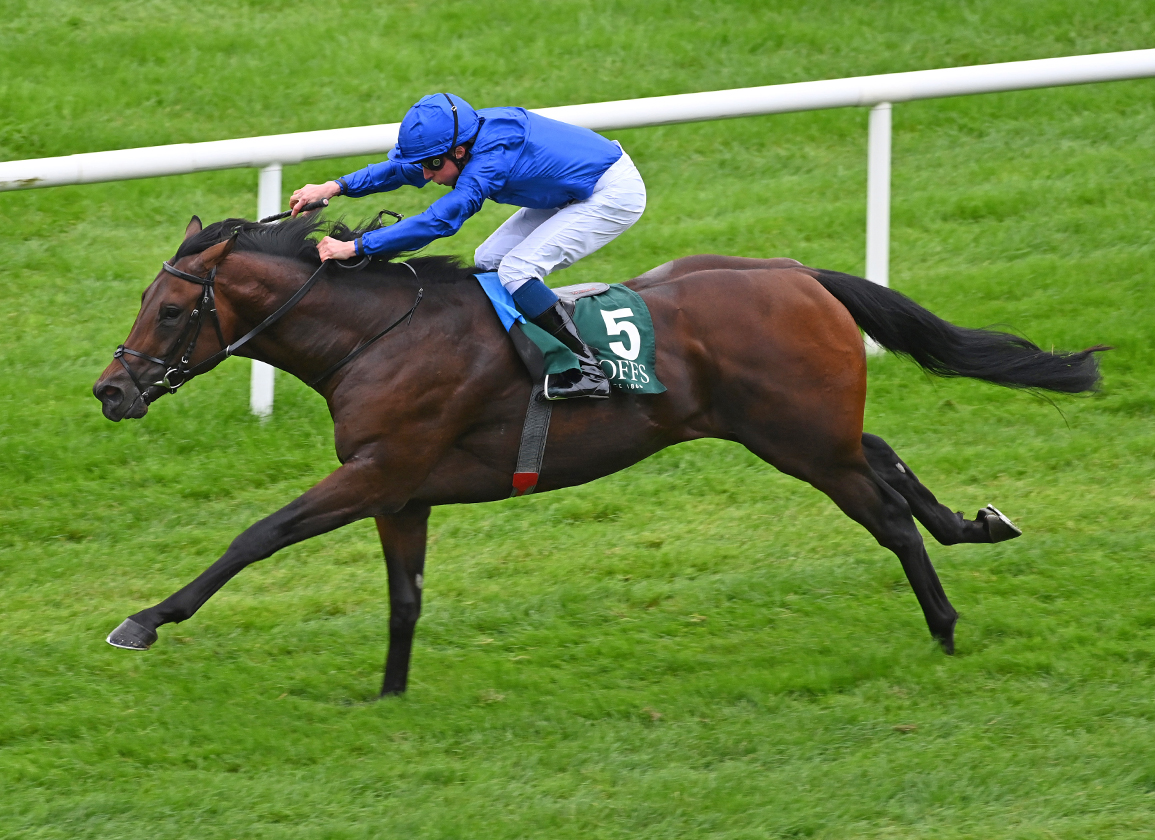 Putting the seal on a stellar weekend for Godolphin's Charlie Appleby stable, Native Trail (GB) (Oasis Dream {GB}) brushed aside TDN Rising Star Point Lonsdale (Ire) (Australia {GB}) for an emphatic 3 1/2-length success in Sunday's G1 Goffs Vincent O'Brien National S. at The Curragh. Like the operation's past winners Dubawi (Ire) and his son Quorto (Ire) coming off a win in the G2 Superlative S. at Newmarket July 10, the 7-2 second favourite was notably green throughout with William Buick needing to cajole him into action as early as the four-furlong marker. Picking up the 8-13 favourite instantly once the whip was applied, the imposing bay readily asserted from the furlong pole to race to the top of the juvenile division, with the long-time leader Ebro River (Ire) (Galileo Gold {GB}) losing a private battle with Point Lonsdale by half a length in third. “This is a hugely exciting race and a very important one that I've been fortunate enough to ride some great 2-year-olds in and this fellow is no different,” Buick said. “I was confident–he's still learning on the job, but he answered every call and I really like what he did in the last 100 yards. He felt like a very good horse–it was a good renewal of the race and the pace was on, so there is every indication that it was a good race. He's a fine big horse and even physically, there is improvement left in him and there is something to work on. Next year he should get a mile no problem.”

Native Trail was introduced over this trip at Sandown June 11 and proved an instant hit when scoring by four lengths, which put him in the frame for the Superlative that Appleby has come to target with his best. Needing time to organise on that occasion, he finished with a flourish to deny Masekela (Ire) (El Kabeir) and that form had since grown in stature with the runner-up denying Saturday's G2 Champagne S. winner Bayside Boy (Ire) (New Bay {GB}) at Newbury. Nevertheless, the relentless momentum behind Point Lonsdale was again impossible to ignore and Ballydoyle's leading juvenile was backed fearlessly once more. Getting a lead this time as the G1 Phoenix S. hero Ebro River took no prisoners, the full-brother to Broome (Ire) had to work hard to subdue the Hugo Palmer representative but just as he managed to do so his real threat was unwinding out wide and was quickly gone.

Appleby had won this with the aforementioned Quorto and Pinatubo (Ire) (Shamardal), while another son of Dubawi in Master of the Seas (Ire) was fourth 12 months ago having looked the winner a furlong from home. Native Trail looks every bit in their league on this evidence. “We took Native Trail for a racecourse gallop a couple of weeks ago and if you'd asked me then if we would be winning a National Stakes, I might have sat on the fence slightly,” he said. “Full credit to the team at home. We definitely felt the horse had come forward for that gallop and we put a cross noseband on him to help him concentrate. William said Native Trail is still very green and it felt like he was going down to the start on a maiden. He gave the horse a shove early doors to get the revs up, but I knew with two furlongs to go the one thing Native Trail was going to do was gallop out strongly. We will see how he comes out of this and discuss things, but I would say that we might give him one more start this year in the [G1] Dewhurst Stakes [at Newmarket Oct. 9].”

Native Trail, who was a 210,000gns Tattersalls Craven Breeze-Up purchase, is the second live foal and first runner out of the unraced Juddmonte cast-off Needleleaf (GB) (Observatory) who was bought by the MAB Agency for a mere 60,000gns at the 2015 Tattersalls December Mares Sale. She is a full-sister to the G1 Haydock Sprint Cup heroine African Rose (GB) and the G3 Prix d'Aumale winner and G1 Prix Marcel Boussac runner-up Helleborine (GB), who proved to be important broodmares for Juddmonte. African Rose was responsible for the G3 Princess Margaret S. winner Fair Eva (GB) (Frankel {GB}), while Helleborine produced the high-class G2 Coventry S. winner and exciting young sire Calyx (GB) (Kingman {GB}).

The second dam New Orchid (Quest For Fame {GB}), who was third in the G3 Lancashire Oaks, is a daughter of Musicanti (Nijinsky II) who also produced the G1 Dewhurst S. hero and sire Distant Music from a mating with Observatory's sire Distant View. Musicanti is kin to the GI Jockey Club Gold Cup, GI Washington D.C. International and GI Suburban H.-winning champion Vanlandingham (Cox's Ridge) and to the dams of the GII Keeneland Turf Mile and G2 Prix Eugene Adam-winning sire Kirkwall (GB) (Selkirk) and to the GI American Oaks heroine Funny Moon (Malibu Moon). From the family of the GI Belmont S. hero and sire Temperence Hill, Needleleaf's yearling filly by Kingman (GB) was snapped up by Godolphin for €950,000 at the Arqana Deauville August Yearling Sale last month. She also has a filly foal by Siyouni (Fr).