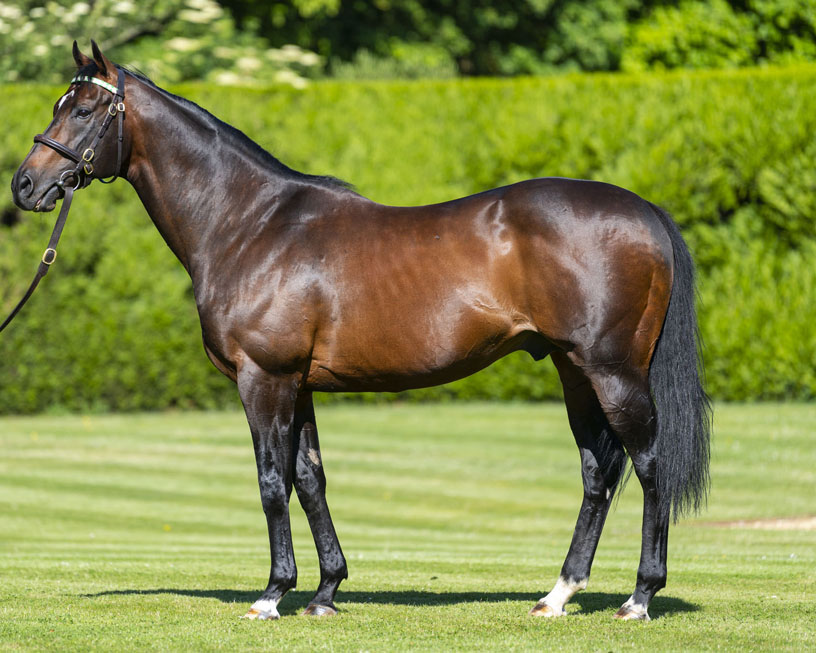 It was a case of another G2 Superlative S., another win for Godolphin and Charlie Appleby as Native Trail (GB) (Oasis Dream {GB}) managed to overhaul Dhabab (Ire) (No Nay Never) and hold on from Masekela (Ire) (El Kabeir) in a pulsating renewal of the seven-furlong Newmarket juvenile staging post on Saturday. Looking more of a stayer than the stable's prior three winners of this since 2016 when scoring by four lengths on debut over this trip at Sandown June 11, the 210,000gns Tattersalls Craven Breeze-Up purchase needed excess stamina as he was left adrift of the action when the crunch came. Along with Masekela, the 11-4 second favourite had to come from the group racing up the centre to chase the likely winner Dhabab, who had cut loose under Frankie Dettori towards the far rail inside the final two furlongs. Organising himself on the start of the climb to the line, the bay eventually overhauled that 9-5 favourite close home and got to the post a short head before the surging Masekela. Dhabab, who looked a non-stayer in the final yards, was 1 1/2 lengths behind in third. “I was very impressed. He's a very imposing horse and I loved him the first time I saw him,” winning jockey William Buick commented. “He's a very raw horse, but when he had something to race against he kept finding more. The guys at the yard would know a lot better than me, but what I do know is that he's very good with all his work and you can't throw enough at him. He's just a lovely horse.”

Appleby went to the G1 Goffs Vincent O'Brien National S. with his last two winners of this, the Dubawi (Ire) pair of Quorto (Ire) and Master of the Seas (Ire), and it could be that The Curragh's Sept. 12 juvenile highlight is the target for Native Trail. “It's a bit of a trodden path now that I like to go to Ireland and have a go over there and the ground will suit him,” he said. “We'll look towards the National Stakes and I think potentially onto something like the [G1] Futurity Trophy [at Doncaster Oct. 23] or the [Oct. 3 G1] Prix Jean-Luc Lagardere [at ParisLongchamp] after that.”

“He was strong at the line and I think we saw that at Sandown really,” he added. “He's obviously a nice horse to ride through a race, because he goes through his gears smoothly and we saw that on his first start and I feel we've seen that again today. I won't go as far to say I was confident that we'd win, but the way the race was developing I knew he'd be doing things the right way round and hit the line strong. He was a breeze-up horse, so he will have a bit of experience put to him early doors. He's a very laid-back character though and this was a good achievement today, but I feel when he steps up in trip in time we will see a good bit of improvement again. My only concern coming into today was the quick ground–we know that Oasis Dreams are better on a sounder surface, but he's a big unit and has some big feet on him so a little bit of ease in the ground won't do him any harm. One of the first things William said when he jumped off him is that he will be a lovely three year old next year.”

Masekela was denied a clear run and therefore could be described as an unlucky loser, but trainer Andrew Balding was happy that he had put his fifth in the June 19 Listed Chesham S. behind him. “That was good to see,” he said. “I thought he would run a big race in the Chesham when we stepped him up to seven furlongs for the first time, but he just couldn't handle that deep ground. Today was much more like it and he looks an exciting horse. It was nice to see him come back to form like that and hit the line well. He will stay further in the future, but I think we stick at seven for the time being. He is a big, fine horse that I don't want to over-race this year. We will just take a deep breath now and work out a plan.”

Native Trail is the second live foal and first runner out of the unraced Juddmonte cast-off Needleleaf (GB) (Observatory), a full-sister to the G1 Haydock Sprint Cup heroine African Rose (GB) and the G3 Prix d'Aumale winner and G1 Prix Marcel Boussac runner-up Helleborine (GB) who cost the MAB Agency just 60,000gns at the 2015 Tattersalls December Mares Sale. African Rose produced the G3 Princess Margaret S. winner Fair Eva (GB) (Frankel {GB}), while Helleborine was responsible for the G2 Coventry S. winner and exciting young sire Calyx (GB) (Kingman {GB}) so this was very much a case of keeping up the family tradition where the dam is concerned.

The second dam New Orchid (Quest For Fame {GB}) was third in the G3 Lancashire Oaks and is a daughter of Musicanti (Nijinsky II), who also produced the G1 Dewhurst S. hero and sire Distant Music from a mating with Observatory's sire Distant View. Musicanti is kin to the GI Jockey Club Gold Cup, GI Washington D.C. International and GI Suburban H.-winning champion Vanlandingham (Cox's Ridge) and to the dams of the GII Keeneland Turf Mile and G2 Prix Eugene Adam-winning sire Kirkwall (GB) (Selkirk) and to the GI American Oaks heroine Funny Moon (Malibu Moon). From the family of the GI Belmont S. hero and sire Temperence Hill, Needleleaf's yearling filly is by Kingman (GB) while she also has a filly foal by Siyouni (Fr).