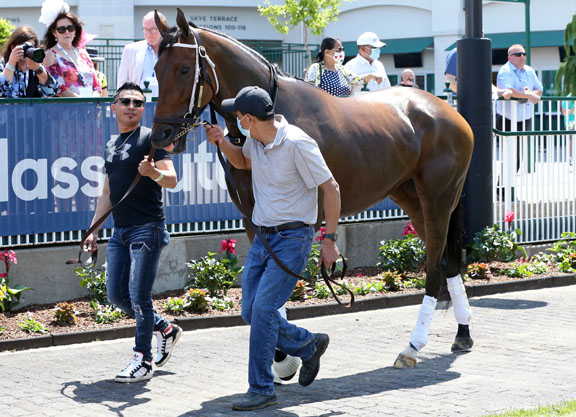 Shedaresthedevil (Daredevil) looks to return to the scene of her career-best effort in Friday's GI La Troienne S. for two-turn fillies and mares. A debut winner here as a juvenile for prior connections, the bay took last March's GIII Honeybee S. at Oaklawn, but was a well-beaten third in the GIII Fantasy S. behind Swiss Skydiver (Daredevil). She returned to Louisville for a six-length optional claiming romp in June, and was similarly dominant in the GIII Indiana Oaks in July. Let go at 15-1 in last year's GI Kentucky Oaks in September, she pressed and passed heavy favorite and eventual champion female sprinter Gamine (Into Mischief) before fending off Swiss Skydiver to prove best that day. Third as the favorite when testing her elders in the GI Juddmonte Spinster S. at Keeneland Oct. 4, she bypassed the Breeders' Cup, and was a game winner of the GII Azeri S. back in Hot Springs Mar. 13. That effort was flattered when narrow runner-up Letruska (Super Saver) came back to upend Shedaresthedevil's champion stablemate Monomoy Girl (Tapizar) in the GI Apple Blossom H. a couple weeks ago.

While Swiss Skydiver isn't back for a rematch after her disappointing third in the Apple Blossom, Ken McPeek saddles a formidable stand-in, Envoutante (Uncle Mo). The dark bay seemed a cut below the best members of her sophomore class last season, but came on late in the year, annexing the GIII Remington Park Oaks Sept. 27 before airing by six lengths in the GII Falls City S. here Nov. 26, good for a 101 Beyer Speed Figure that matches up with the field's-best number Shedaresthedevil earned in the Oaks. Envoutante flattened to fourth after chasing Shedaresthedevil in the Azeri.

Peter Brant's Dunbar Road (Quality Road) took the 2019 GII Mother Goose S. and GI Alabama S., and added a track-and-trip win in the Shawnee S. last May before scoring in the GII Delaware H. She was third in both the GII Beldame Invitational S. Oct. 4 and GI Breeders' Cup Distaff Nov. 7, and would be the main beneficiary of a quick early pace while making her first start at five.

Lightly raced Paris Lights (Curlin) needs to get faster, but she's won four of five, including the GI Coaching Club American Oaks at Saratoga and the seven-furlong GIII Distaff H. off the bench last time Apr. 2.