NYSGC Passes One year on Whip Reform Talk, No Action 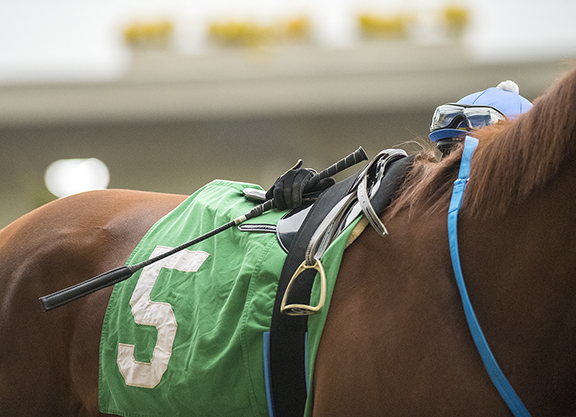 The New York State Gaming Commission (NYSGC) Jan. 26 once again elected not to propose or vote upon any changes to whip use that would be more humane to Thoroughbreds, making it now more than a year since that agency first began discussing how it might address one of the sport's hot-button equine welfare issues the way regulators in other racing states have long since done.

“We have a report that just arrived to us in the last 24 hours on the use of the crop. And staff will be spending time with that report–and the commissioners will be spending time with that report–and hope to address the issues at our next meeting,” NYSGC chairman Barry Sample said at the tail end of Tuesday's teleconference, which included only two other rule-making items: The licensure of veterinary technicians and regulating home-delivery sales of lottery tickets.

Back in December 2019, NYSGC staffers were first directed to discuss crop use among industry stakeholders and report back at a future commission meeting.

Despite that directive, whip use did not get brought up the next time the NYSGC met Feb. 10, 2020, for a meeting that lasted only six minutes (By contrast, most state racing and gaming commission meetings last an hour or more, and it is not uncommon for some to stretch to four or five hours).

At NYSGC's May 19 meeting, commissioner Peter Moschetti cited “the length of today's agenda” (32 minutes) as the reason the topic of whip rule reform had to be pushed off until the summer.

When the board next met July 27 for a meeting that lasted 14 minutes, Moschetti cited the need for the board to review a “lengthy memorandum” that commissioners had just received from its staff on whip use before the NYSGC could deliberate any proposed changes.

When the NYSGC again met for another 14-minute meeting Sept. 21, Sample said, “I think we all agree that [whip reform] is a matter that needs to be brought to closure sooner rather than later. Some of us contend that it's been out there too long.”

Moschetti agreed, adding, “I think the time has come. We want to do this. We've talked about doing this. Staff has done their work.”

By that time, paradigm-shifting whip reform changes had either already been implemented or were in the process of being codified in California, Kentucky, New Jersey, Maryland, Delaware and Ontario. With the exception of California, whose racing commission had started its reform process several years ago, all of the other jurisdictions had taken up the topic around the same time New York first proposed doing so late in 2019.

While New Jersey eventually banned whipping outright starting in 2021, the other jurisdictions generally carved out new rules based on strike limits, and/or the manner (underhanded or overhanded) in which a jockey can whip.

During the Oct. 19 NYSGC meeting, the board heard 2 1/4 hours of pro and con testimony from industry stakeholders about whip reform. But no new regulations were proposed at that time, nor were any measures floated when the board next met Nov. 30 and proposed or passed more than a dozen other racing-related rules.

If the NYSGC decides to advance whip-related rule proposals at its next (yet-to-be-scheduled) meeting, any proposed measures would (assuming passage) have to published in the New York State Register and get sent out for a general public comment period. Then commissioners would then have to come back for a final vote, pushing the effective date for any whip-related reforms in New York into mid-2021 at the earliest.