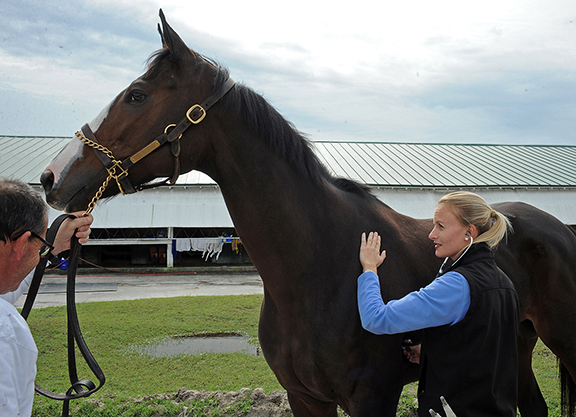 A New York Senate public hearing on the welfare of racehorses elicited four hours of diverse pro-and-con testimony in Albany on Wednesday, with legislators probing regulators, racing industry participants, veterinarians, aftercare personnel, and advocates for responsible animal care for their views on how the state should move forward with legislation and funding to address the issue.

Invited speakers were limited to 10 minutes of time at the microphone, although senators established early in the meeting that New York State Gaming Commission (NYSGC) equine medical director Scott Palmer, VMD, would be given the courtesy of an expanded time slot by members of both the Senate’s Standing Committee on Racing, Gaming and Wagering and the Standing Committee on Domestic Animal Welfare because of his role in overseeing the state’s racehorse health protocols.

“The existential threat to Thoroughbred racing worldwide is the death of racehorses,” Palmer told the committee members after detailing nearly a decade’s worth of safety interventions the NYSGC has implemented to lower New York’s catastrophic injury rate to 1.29 per thousand starts in 2018 versus the national average of 1.68.

“This is an effort to control that and mitigate it, and it worked,” Palmer said. “[New York has] basically been below the national average for quite a long time.”

Palmer said the perils of high-speed exercise and a racing industry facing a drastic reduction in its Thoroughbred population are among the chief risks to racehorse health.

“Let’s be honest: Risk is a part our daily lives,” Palmer said. “Horse racing is a hazardous business. There’s no question about it. And why is that? It’s not because we don’t understand it. It’s not because we don’t think it’s dangerous. It’s not because we’ve got our head in the sand. It’s just dangerous [because of] the nature of the animal. They’re big and they’re fast. It’s about force times mass [equals] acceleration. It’s a very simple equation. The bigger they are, the faster they go, the more likely they are to get hurt.”

With regard to economics, Palmer said, “It’s very simple: Horse racing is in the business of running races…. The racing organizations want to hold more races. The more races they can hold, the more money they can earn…. So right off the bat, there’s a business model challenge for horse racing…. It’s not often talked about, but it’s very significant.”

Palmer urged senators to understand that his priority is to provide positive equine welfare results backed by data rather than to craft a public-relations campaign to gloss over the issue.

Asked to name the most important factor in risk reduction, Palmer prefaced his statement by saying that horse health at racetracks in multi-factorial, but he did point to one “huge” difference in recent years at the New York Racing Association, where veterinarians are no longer overseen by the racing department.

Modifying the purse-to-claiming price structure and cutting back dosage withdrawal times for corticosteroids and anti-inflammatory drugs has also had “enormous implications” in a positive sense, Palmer said.

But not everybody agreed with Palmer on whether enough is being done.

“What goes on at these racetracks…is that the veterinarians have completely abdicated their authority as medical professionals and their duty according to the statutes of the Veterinary Practice Act,” said Sheila Lyons, DVM, the founder and director of the American College of Veterinary Sports Medicine and Rehabilitation Homecoming Farm, Inc. “What they do, is they simply deliver drugs at trainers’ requests.”

Lyons said this results in racehorses having “the kitchen sink of drugs dumped into them within days of arriving at a racetrack in New York.”

Lyons said she often checks the pre-stakes veterinary logs that the NYSGC posts online prior to big races like the GI Belmont S., where she sees “pre-race” listed as the diagnostic reason for pharmaceutical treatments.

“‘Racing’ is not a medical condition. So right there they have violated the Veterinary Practice Act,” Lyons said.

John Scheib, the director of Responsible Animal Care, Inc., testified that he took umbrage with the way Palmer and other regulators cite on-track equine deaths as a per-start function, because it paints a “misleadingly low” assessment of the situation.

“We kill an average of three racehorses every single day competing and training on tracks in America,” Scheib said. “The welfare of racehorses is directly related to the need to win, to make money…. Equine welfare on the track will always fail, because it’s 100% about a business, and there will always be enough bad actors to ruin it for the rest of us.”

Scheib also testified that the litany of protocols and safety programs that the sport has thought up to police itself strains credulity.

“No one I know who owns equines outside of racing has to make policies to keep their horses safe from their own barn staffs,” Scheib said, citing concerns over outfits drugging their own horses. “That’s unique to racing.”

The fiercely competitive economic nature of the industry also surfaced in discussions about equine slaughter.

John Holland, the president of Equine Welfare Alliance, said the amount of horses that get exported from the United States for slaughter “can’t be cured with our present racing structure. You can’t just put a band-aid on and give a little money here and there to rescues. You can do PR that way, but you can’t cure the problem.”

Holland added that “when horses and money meet, horses lose. It’s just been that way for a long, long time. I’d love to see it changed, but I’m not sure it can be changed.”

The issue of which is better for horses–life at a sanctuary or going through a rehab program–came up, and Anna Ford, the Thoroughbred program director for New Vocations, told the politicians that in order to provide the most bang for the welfare buck, retraining programs were the way to go.

“At New Vocations, we have room for 150 horses. If those were sanctuary horses, they’d be [maxxed out at stabling capacity],” Ford said. “We can help over 350 horses a year for the same amount of money. Not that we don’t need sanctuaries–we need them. But we need to put a heavy focus on rehab and retraining” to cycle horses into permanent outside homes.

Richard Schosberg, the chairman of the New York Thoroughbred Horsemen’s Association aftercare committee, advocated for the support of programs that are accredited by the Thoroughbred Aftercare Alliance (TAA), the non-profit nationwide organization that inspects and awards grants to approved organizations to retire, retrain, and re-home racehorses using industry-wide funding.

“We feel that any funding mechanism created by the legislature must support the TAA-accredited organizations,” Schosberg said. “We can be assured that way that the funds are being used prudently and as intended to support New York’s retired racehorses.”