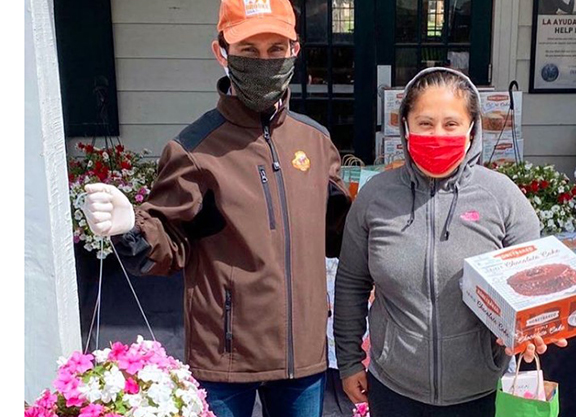 When the New York Racing Association announced Mar. 25 that racing would be suspended due to the coronavirus pandemic, perhaps no lives were affected as much as those of the New York backstretch workers. The New York Race Track Chaplaincy, which has been dedicated to supporting and ministering to the needs of this community for over 30 years, jumped into action.

They began a campaign to help the 3,500 people who were suddenly without their normal wage deal with the challenges that resulted from the pandemic, asking for help in providing food and germ-fighting supplies. The racing industry responded enthusiastically with both financial and emotional support.

“It is incredible what we have been able to do over the past few weeks thanks to your generosity,” she said. The New York Race Track Chaplaincy has been able to provide food to hundreds of backstretch workers every single week thanks to your help and to all the donations that have been coming in. We are so grateful to all the racing fans around the United States who have helped us in our efforts to provide food and other supplies to backstretch workers. To all of you who supported the chaplaincy, we would like to say thank you.”

One of the biggest focuses for the chaplaincy team was to make sure that the shelves of their food pantry remained filled. Ramon Dominguez, president of the New York Race Track Chaplaincy Board, said that this goal was accomplished.

“The support for the food panty has been overwhelming. So many people have come forward to ensure the shelves have enough food to feed the families,” he said. “We have been touched by so many donations of any size, as well as many calls, messages, and prayers. It has been so heartwarming, and all of this support has come from people from all over–different states near and far.”

One racing participant in particular made a major impact on the campaign. Owner Len Green of DJ Stable made a matching pledge of $25,000. For every dollar that people donated, Green matched for up to $25,000.

Green has been a strong supporter of various chaplaincy programs for decades; he was recently challenged to make his stance more public.

“I don't usually do these publicity things,” Green said. “But my good friend Terry Finley called me and said he wanted me to give something for this campaign publicly. When I asked why, he said that I've been in this business for a long time and I have a lot of friends and enemies, so if I give something, they're going to want to match me.”

Green said that over his career, he's learned that challenging people can get things done. “I was amazed by how fast the results came in. It's a great cause, and I'm not the hero. I'm just a small part in this whole thing.”

Green's son and the general manager of DJ Stable Jon Green added, “You have to recognize and take care of the people who take care of you. People on the backstretch have always been near and dear to us. We've always done whatever we can do to recognize all their hard work, and this was just another way for us to show our appreciation.”

Chavez said that Green's challenge was monumental in their campaign. “That's what I call extreme generosity. Like him, there are many other people who have signed up to help, support the cause, and to help us in providing all the things that the families of the backstretch need during this very difficult time.”

Although the Belmont track opened for training on May 12 and racing is set to return to New York during the first week of June, Dominguez said that their work is far from finished.

“This is an ongoing effort. With the constant need for different supplies and food, support is greatly appreciated.”

Financial donations can be made here. For information about donations of food, contact [email protected] or text 516-428-5267.