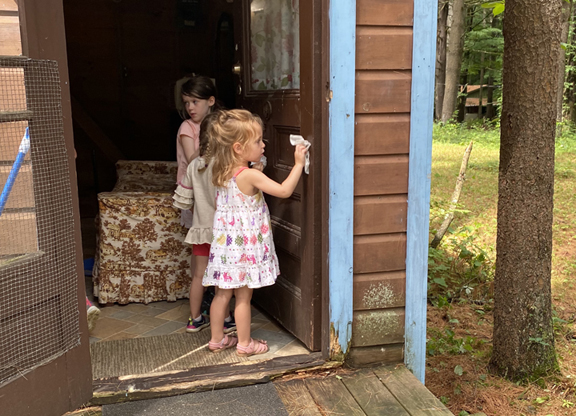 Nick Caras, Programs Director of the NY Race Track Chaplaincy, Kim Weir, a Saratoga Volunteer Coordinator, and Mark Kehrer, Pastor of Revelation Church, have organized a small army of volunteers and sponsors from the Saratoga Springs community in recent weeks to improve housing conditions for backstretch families who have traveled to Saratoga for the duration of the meet.

For years, many of the stable workers have stayed at rudimentary cabins at the Pine Grove Family Camp on Pine Road in Saratoga Springs. Caras always wanted them to have something better.

“The sheets in their beds were even turned down, and each cabin was lovingly prepared,” Weir said.

In addition to the sparkling clean conditions, each family received some special gifts:
• The Saratoga Chamber of Commerce donated one box of masks and one bottle of hand sanitizer for each cabin
• Impressions of Saratoga donated one tote bag full of goodies to each cabin.
• Temple Sinai donated one loaf of Challah bread to each cabin

“To see so many different entities within the Saratoga community come together to help some families they don't even know was really heartwarming,” Weir said. “It was really a group effort and it couldn't have happened without the generous and widespread support we received.”

Among those who pitched in were: Impressions of Saratoga (owner Marianne Barker and daughter Maddy Zanetti); The Dominguez Family; Habitat for Humanity of Northern Saratoga, Warren, and Washington Counties; The Brown Family; The Brindle Family; The Lautenberg Family; Saratoga Springs Friends of Recreation; The Weir Family, The PNECC Social Concerns Committee, The Saratoga Immigration Coalition, Temple Sinai; and Friends of Spa City.

“I think this outpouring of support is just another example of the tight bond that exists between the good people of Saratoga and the Thoroughbred racing community,” Caras said.