Nuggets of Derby Intrigue in First Preps of 2020 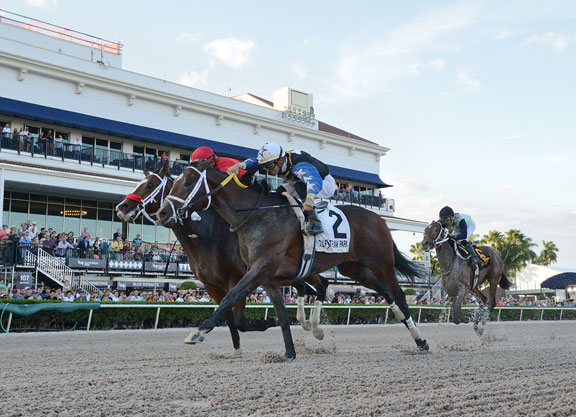 Chance It (inside) takes the Mucho Macho Man | Lauren King

So which 3-year-old ran the more impressive GI Kentucky Derby prep race last week? You're forgiven if you want to grade two of the three stakes as “incomplete” because they more or less equated to public workouts won by heavy favorites who had short fields at their mercy. But there were enough nuggets of intrigue to spark decent debate, even at this early stage of the season.

The 7 3/4-length beatdown administered by Authentic (Into Mischief) in Saturday's GIII Sham S. at Santa Anita Park scored highest in the “raw potential” category even though the wire-to-wire win by the 6-5 favorite came with more late-in-the-lane drama than necessary.

Authentic broke fluidly from the rail post and willingly assumed command, loping off into the clubhouse bend while kept two paths off the fence by jockey Drayden Van Dyke. The colt was keen onto the backstretch, then settled while maintaining about a length-and-a-half margin to the far turn. Three eighths out, the well-within-himself Authentic effortlessly clicked into a higher cadence when cued to quicken, and he was opening up by three easy lengths at the quarter pole, approaching what looked like it should have been a cakewalk home.

Instead, Authentic gave Van Dyke a tussle from mid-stretch to the sixteenth pole by ducking in, veering out, and repeatedly throwing his head. He eventually regained focus and won geared down, and trainer Bob Baffert indicated post-race that Authentic might be equipped with more than a shadow roll the next time he races.

Maturity (or lack thereof) obviously plays a big role here. Authentic is a May 5 foal, so if he does manage to go on and win the Derby, he'll do it three days shy of his actual third birthday. The colt earned a 90 on the Beyer Speed Figure scale.

Baffert has won six editions of the Sham S., but none of his five Derby champs won that prep en route to Louisville. In fact, his only Sham winner to even run in the Derby was Bob and John, who finished 17th in 2006.

Chance It's Inside Passage

Chance It (Currency Swap) gave us something that's been in short supply on the Derby trail recently: Evidence that he can withstand–and prevail in–a length-of-stretch fight.

Sent off as the 7-10 favorite in the one-turn-mile Mucho Macho Man S. at Gulfstream Park, Chance It stalked at the rail while fourth then third on the back straight, and jockey Tyler Gaffalione didn't budge from his inside position even as the field was tightening up and Chance It was full of run with nowhere to go entering the far turn.

Gaffalione's deft gamble of riding the rail paid off turning for home when Chance It shot through a tight inside passage to claw away the lead not once, but three times down the length of the lane while pestered persistently by As Seen On Tv (Lookin At Lucky). He had the head-bob momentum when it counted at the wire, galloped out stronger than his rival, and survived a foul claim by the trainer of the runner-up.

Chance It's 94 Beyer stands out, and it underscores his home-track advantage at Gulfstream because it's the fourth 90 or better Beyer he's earned over the surface.

Undefeated Independence Hall (Constitution) was bet down to a dime on the dollar in the Jerome S. at Aqueduct on New Year's Day, yet he too gave bettors a scare with a stutter-step start out of the gate that left him last in the initial stages of the one-turn mile.

After being guided to the outside to stay clear of any other potential trip trouble, the colt dragged jockey Jose Ortiz to contention, where he loomed as an intimidating presence outside of an overwhelmed 75-1 pacemaker who would eventually fade to last. He wrested away the lead at will, barreled into the lane without any serious challengers in his wake, and mildly shied from the stick in mid-stretch before responding to being ridden out four lengths best at the wire.

Independence Hall's pre-race antics are worth noting: He was rambunctious while being walked in the paddock and at one point kicked the wall of his saddling stall.

“He had a lot of energy here in the paddock, but last time he was like that too on the racetrack,” Ortiz said post-race. “Today, as soon as I got to the pony, he was very nice and relaxed. He broke a bit slow today because he wasn't standing the right way. It was a small field and I was able to put him in the clear. I didn't want to get stuck in behind horses today and try to be a hero. I got the opportunity to ride him like he was the best horse and I did.”

Independence Hall's 83 Beyer represents a precipitous drop off the monster 101 he earned in his 12 1/4-length dismantling of the GIII Nashua S. field Nov. 3. That was the only triple-digit Beyer for a 2-year-old in North America last year.

“He didn't get away good, and this [track] probably got to the bottom of him because it's been two months,” said trainer Michael Trombetta. “This is a different track than he ran on last time. I'm just glad to get through it and it's one more step in the direction we want to go.”