Now 10 and off for 28 Months, Green Gratto Entered at Monmouth 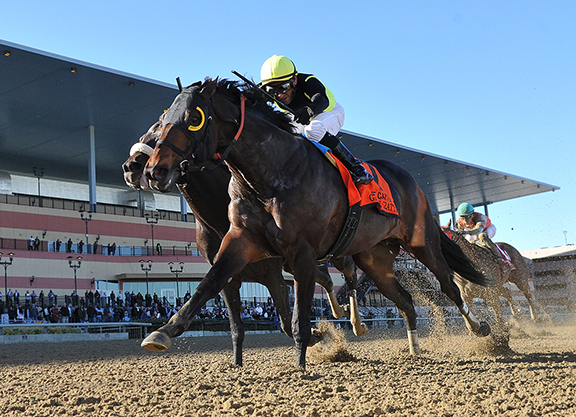 Considering his age and all he accomplished in his career, Green Gratto (Here's Zealous) would have seemed to have earned a cushy retirement. Instead, he is scheduled to run in a an optional claimer–in for the $20,000 tag–for New Jersey breds Sunday at Monmouth, his first start since Apr. 19, 2018. It's the latest twist in a controversial story that began when he returned to the racetrack in November, which caused an uproar on social media from critics who felt it was improper and too risky to run the horse again.

During his career, Green Gratto was a feel-good story. He was more or less given away for free to owners Anthony and Gaston Grant, whose only initial financial obligation was to pay the horse's bills while he was being broken and trained in Florida. The Grants are natives of Jamaica and Gaston, his trainer, doubled as a UPS driver working out of Brooklyn.

Green Gratto never won again after the Carter, losing 12 straight. He was retired in 2018 and sold, with the plan being for him to stand at stud in New York at Total Bloodstock Farm. It turned out that he was infertile.

According to current owner Norman Wilson, Green Gratto was owned at the time by a partnership. He said the horse wound up in Kentucky before being sent to his farm in Ocala. The plan was for Wilson to look after the horse for a brief time and then put him in a livestock sale in Ocala in order to dissolve the partnership. Wilson said that when Green Gratto arrived at his farm it was clear he had not been given proper treatment and care.

“When the horse was sent to us he was skin and bones,” Wilson said. “He looked awful. His mane was long with knots in it. His tale was knotted. It looked like he had no care whatsoever.”

Not wanting Green Gratto to fall into the wrong hands, Wilson and his wife Liz wound up buying him at the auction held by Florida Horse Sales.

“There were obviously the wrong kind of buyers there, so we purchased him.” said Wilson, who would not disclose how much he paid for the horse. “There was somebody there looking to buy him and turn him out in a field with quarter horse mares. That horrified us. As aggressive as he was, it would have killed him.”

Wilson says that Green Gratto did not enjoy being away from the racetrack and that he was overly aggressive and constantly nervous.

“This is a horse that really enjoys his job,” Wilson said.  “After a while we decided to put him in training because he wasn't a happy horse. He put on 100 pounds when we started training him.”

“It was after his first published work that social media went nuts,” Wilson said. “That cost us a lot of time and aggravation. Gulfstream caved into social media and let social media run their racetrack. We were told to move our horse even though there were other horses there in almost the same situation and the same age. There were horses down there almost the same age and after long layoffs that were running. They just weren't as popular as this horse.”

When asked if he understood why people were upset that he was trying to run the horse again, Wilson said: “Everybody is entitled to their opinion. I just have a different opinion than they do, We are looking to have a little bit of fun and let him enjoy his racing career again. We are 100% for the horse. I just share a different opinion on when it's time to stop on him.”

Green Gratto was transferred to the barn of trainer Kathleen O'Connell and arrived at Monmouth in June. He's had three workouts there, all of them at a half-mile. O'Connell is a respected trainer, which played into Monmouth's decision to clear the horse to run.

“I spoke with Kathleen earlier this year,” Monmouth racing secretary John Heims said. “She advised me she had this horse and the horse was doing fantastic. 'K.O.' is a terrific horsewoman and not someone I would ever question. She knows what she is doing. When the entry came in we weren't concerned because I had spoke to her earlier about this. We have other 10-year-olds that run here. We have a horse, Visionary Ruler (Pollard's Vision), who is 10 and keeps running and he just doesn't quit.”

Ten is the maximum age allowed for a horse to run at Monmouth.

The steep drop in class may not be enough for Green Gratto to win Sunday. No doubt taking into account his age and the long layoff, the morning line maker has made him 8-1.

“I don't know what to expect.” Wilson said. “I would imagine he will perform well. It's the first back, so you never know. I expect he will do halfway decent. I don't think we will be embarrassed.”

The purse for Monmouth's race is $65,265, and the Wilsons stand to take home over $35,000 if their horses wins. It would be a nice payoff for a horse they likely acquired for very little money. But Wilson said the chance to make some money is not all that motivates him.

“I I have said many times that he has a forever home with us,” he said. “People may think we are strictly doing this for profit, but that's not the case. I am a sportsman and I enjoy the game. I like race horses. He is a good horse and there is nothing wrong with him. He is sound. He may not come back like we want or he may come back better. Who knows? It is a gamble. But I feel it is safe and I wouldn't do this if I didn't think it was a safe bet to try it.”