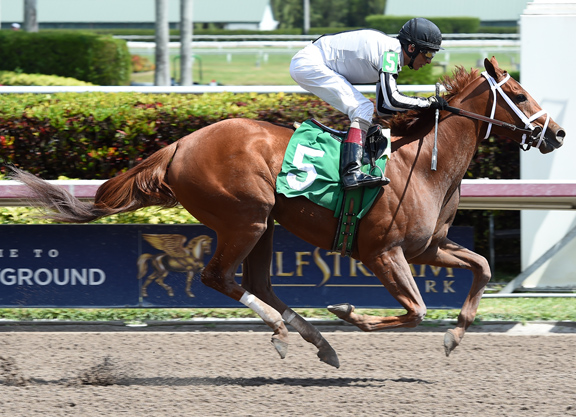 In this continuing series, we take a look ahead at US-bred and/or conceived runners entered for the upcoming weekend at the tracks on the Japan Racing Association circuit, with a focus on pedigree and/or performance in the sales ring. Here are the horses of interest for this Saturday running at Kyoto and Tokyo Racecourses. Former Horse of the Year Almond Eye (Jpn) (Lord Kanaloa {Jpn}) makes her first start since June in defense of her title in the G1 Tenno Sho (Autumn), a race connections will use as a springboard to potential targets at home and/or abroad over the next six weeks:

Saturday, October 31, 2020
5th-KYO, ¥13,400,000 ($128k), Newcomers, 2yo, 2000mT
VICTORION (JPN) (c, 2, Uncle Mo–Easter Island, by Giant's Causeway) is the first foal for his dam, an unraced daughter of GISW Awesome Maria (Maria's Mon), who was purchased for $350K carrying this foal in utero at the 2017 Keeneland November Sale. Victorion, whose female family includes Grade I winners Discreet Cat and Discreetly Mine, was purchased for ¥20 million ($180,400) as a foal at th 2018 JRHA Select Sale and his yearling half-sister by successful young sire Duramente (Jpn) made ¥22 million ($206,785) at the Hokkaido Summer Yearling Sale this past August. Easter Island also has a weanling colt by Orfevre (Jpn). B-Hidaka Taiyo Bokujo

6th-TOK, ¥13,400,000 ($128k), Newcomers, 2yo, 1600m
AMERICAN YELL (c, 2, Tapit–Sindy With an S, by Broken Vow), a $700K KEESEP purchase, is out of a Grade III-winning dam who has already worked well with this sire, producing SW & GSP My Miss Tapit and the GSP duo I'll Wrap It Up and Rattataptap. Owner Katsumi Yoshizawa, who campaigned Master Fencer (Jpn) (Just A Way {Jpn}) in the 2019 Triple Crown, also races SP American Seed (Tapit), who aired by seven lengths in his first start on dirt last weekend. B-Gainesway Thoroughbreds Ltd (KY)

ANNUNCIATION (c, 2, Union Rags–Acquant, by Giant's Causeway) is the first produce for his three-time winning dam, a daughter of dual Grade III winner Social Queen (Dynaformer), whose son Force The Pass (Speightstown) took out the 2015 GI Belmont Derby Invitational S. A $230K KEESEP acquisition, the chestnut is a half-brother to an Arrogate colt that was bought back for $425K at KEESEP last month and a weanling colt by Mastery. B-Colts Neck Stables LLC (KY)