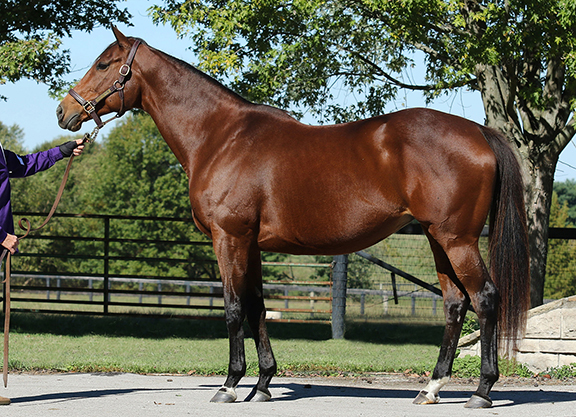 In this continuing series, we take a look ahead at US-bred and/or conceived runners entered for the upcoming weekend at the tracks on the Japan Racing Association circuit, with a focus on pedigree and/or performance in the sales ring. Here are the horses of interest for this weekend running at Niigata and Kyoto Racecourses, the latter of which plays host to Sunday’s G1 Shuka Sho, the final leg of the Japanese Triple Tiara. Daring Tact (Jpn) (Epiphaneia {Jpn}) will go favored to become the sixth to complete the sweep, joining the likes of Gentildonna (Jpn) and Almond Eye (Jpn), but would be the first to do so undefeated. Daughters of US Grade I winners Ria Antonia and Hilda’s Passion will try to play the role of spoiler:

5th-NII, ¥13,400,000 ($127k), Newcomers, 2yo, 1400mT
MOON BEAD (JPN) (f, 2, American Pharoah–Evening Jewel, by Northern Afleet) is the first Japanese-foaled produce for her dam, winner of the GI Ashland S. on the Polytrack and the GI Del Mar Oaks on turf and the unluckiest of losers in the GI Kentucky Oaks in 2010. The dam of the SP Bernardiva (Bernardini), Evening Jewel was sold for $950K in foal to Pioneerof the Nile at KEENOV in 2016 and was covered by this sire in Kentucky prior to her export. Evening Jewel is the dam of a yearling colt by Deep Impact (Jpn). B-Shadai Farm