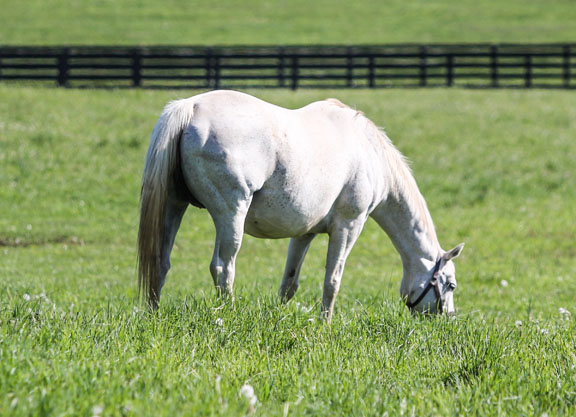 In this continuing series, we take a look ahead at US-bred and/or conceived runners entered for the upcoming weekend at the tracks on the Japan Racing Association circuit, with a focus on pedigree and/or performance in the sales ring. Here are the horses of interest for this Sunday running at Chukyo, Niigata and Tokyo Racecourses. The weekend's feature takes place at headquarters, where champion Gran Alegria (Jpn) (Deep Impact {Jpn}–Tapitsfly) figures a firm favorite for the G1 Victoria Mile:

Sunday, May 16, 2021
5th-TOK, ¥13,830,000 ($126k), Allowance, 3yo, 1600mT
VANISHING POINT (f, 3, Tapit–Unrivaled Belle, by Unbridled's Song), the full-sister to two-time Eclipse Award and three-time Grade I winner Unique Bella, graduated by seven lengths at first asking over the metric mile and a quarter last August (see below, gate 7), but went off form thereafter and reboots here at the shortest trip of her career with Christophe Lemaire signed on. The $1.5-million Keeneland September grad is out of the 2010 GI Breeders' Cup Ladies' Classic winner–acquired by Mandy Pope's Whisper Hill Farm for $3.8 million in foal to Tapit at KEENOV in 2016–and second dam Queenie Belle (Bertrando) was a two-time winner at the graded level. B-Whisper Hill Farm LLC (KY)

5th-CKO, ¥13,830,000 ($126k), Allowance, 3yo, 1800m
MOON BEAD (JPN) (f, 3, American Pharoah–Evening Jewel, by Northern Afleet) debuted victoriously in a 1400-meter newcomers' event on the turf last October (see below, gate 18), but was unplaced in two subsequent tries and returns from a four-month break to try the dirt for the first time. The filly's dam, a Grade I winner on turf and synthetic, went within a pixel of upsetting the 2010 GI Kentucky Oaks and was sold for $950K in foal to Pioneerof the Nile at KEENOV in 2016. The dam of the SP Bernadiva (Bernardini), Evening Jewel is a half-sister to Japanese SW Deep Jewelry (Jpn) (Deep Impact {Jpn}) and to the dam of GISW Denman's Call (Northern Afleet) and GSP Torosay (Goldencents). B-Shadai Farm

7th-NII, ¥14,360,000 ($131k), Allowance, 4yo/up, 1200m
DYLAN'S SONG (c, 4, Summer Front–Poetic Riches, by Songandaprayer) overcame a world of trouble to break his maiden at second asking right around this time last year and was unplaced in his lone appearance since, a six-furlong allowance at Nakayama Jan. 17. Produced by a half-sister to MGSP Hard Seven (Rock Hard Ten), Dylan's Song was a $47K short yearling at KEEJAN in 2018 and was bought back for $75K at KEESEP before realizing $130K at OBS March in 2019. B-Erin Knehr & Catalyst Bloodstock (KY)

10th-TOK, ¥34,200,000 ($312k), Open Class, 3yo, 1600m
SATONO MUSTANG (c, 3, Mineshaft–Mare and Cher, by Old Fashioned) won his maiden second time out at this track last November and tacked on a first-level allowance in February (see below, gate 6), but may have struggled with a rain-affected track when ninth at Chukyo Mar. 13. A $25K KEESEP yearling turned $150K OBSMAR breezer, the dark bay is out of a winning half-sister to SW & MGSP Fight On (Into Mischief) and GSP Two Weeks Off (Harlan's Holiday). B-Haymarket Farm LLC (KY)

REFRAME (f, 3, American Pharoah–Careless Jewel, by Tapit) became an instant Internet sensation with a dramatic first-out victory last July (see below, gate 15) and made it two straight with an allowance score in October. Unplaced, but not disgraced in three tries at group level, the $410K KEESEP purchase switches to the dirt for the first time and has the license to do so on pedigree, as her free-running dam was a three-time GSW on the surface, including the GI Alabama S. in 2009. B-Summer Wind Equine LLC (KY)