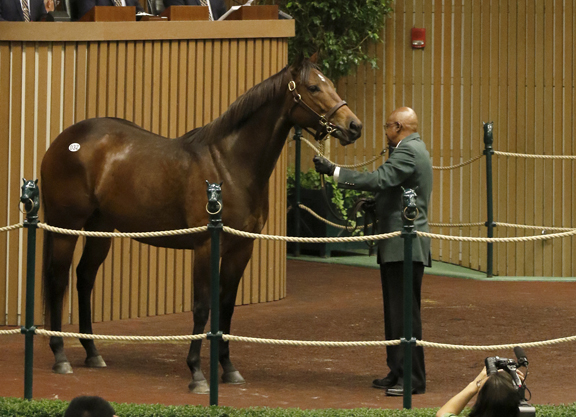 GISW Peace and War fetched $1.45m at KEENOV in 2016 carrying the filly that would become Valkyrja | Keeneland photo

In this continuing series, we take a look ahead at US-bred and/or conceived runners entered for the upcoming weekend at the tracks on the Japan Racing Association circuit, with a focus on pedigree and/or performance in the sales ring. Here are the horses of interest for this weekend, with all the focus on Chukyo Racecourse:

Sunday, March 14, 2021
6th-CKO, ¥13,830,000 ($127k), Allowance, 3yo, 1800m
COSMIC MIND (c, 3, Into Mischief–Mystical Star, by Ghostzapper) overcame a hellacious trip to take his career debut going this distance at Nakayama Jan. 17 (see below, gate 4) and is exiting a close fifth facing winners for the first time going the one-turn mile at Tokyo Feb. 14. The $280K KEESEP purchase is one of two winners from as many to race for his dam, winner of the GII New York S. and third in the GI Flower Bowl Invitational S. on the grass and second in a Polytrack renewal of the GI Juddmonte Spinster S. B-Candy Meadows LLC (KY)