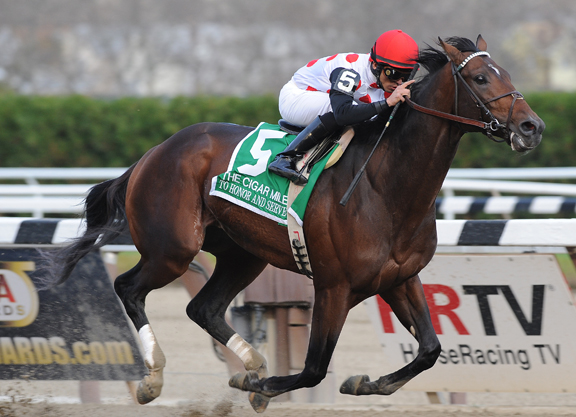 In this continuing series, we take a look ahead at US-bred and/or conceived runners entered for the upcoming weekend at the tracks on the Japan Racing Association circuit, with a focus on pedigree and/or performance in the sales ring. Here are the horses of interest for this weekend running at Chukyo and Hanshin Racecourses:

2nd-HSN, ¥9,680,000 ($93k), Maiden, 2yo, 1800m
AMERICAN PEACE (c, 2, Tapit–La Cloche, by Ghostzapper) is one of at least four runners by this sire entered this weekend for owner Katsumi Yoshizawa of Master Fencer (Jpn) fame and is the early 1-2 favorite off a strong runner-up effort when trying the dirt for the first time at Chukyo Oct. 4 (video, gate 10). The $325K Keeneland September yearling, a full-brother to GSW Bellevais, is out of a Grade III-winning daughter of MGISW Memories of Silver (Silver Hawk), herself the dam of MGISW Winter Memories (El Prado {Ire}) and granddam of MSW & MGSP 'TDN Rising Star' Winter Sunset (Tapit). This is also the female family of 'Rising Star' Hawkish (Artie Schiller). Don Alberto Corp. acquired La Cloche for $2.4m in foal to Tapit at Fasig-Tipton November in 2014. B-Don Alberto Corporation (KY)

5th-HSN, ¥13,400,000 ($129k), Newcomers, 2yo, 1800m
MOZU LADY MO (f, 2, Uncle Mo–Czarina, by Bernardini) cost $375K at KEESEP in 2019 and is out of a full-sister to MGISW To Honor and Serve and GISW Angela Renee; and a half to SW & GISP Elnaawi (Street Sense). The filly's third dam was responsible for MGSW India (Hennessy), whose MG1SW son Mozu Ascot (Frankel {GB}) was recently retired to stand the 2021 breeding season at Arrow Stud. The March foal is bred on the same cross responsible for GISW Mo Town and GSW Modernist. B-Rigney Racing LLC (KY)

Sunday, December 13, 2020
4th-HSN, ¥13,400,000 ($129k), Newcomers, 2yo, 1800m
YORIKUN ROAD (JPN) (c, 2, Quality Road–Hymnotic, by War Front) is the first produce for his dam, a full-sister to SW & G1SP Whitecliffsofdover, who was purchased for $240K with this foal in utero at KEENOV in 2017. The colt's second dam Orate (A.P. Indy) also produced SW & GISP Endless Chatter (First Samurai) and is a full-sister to the late, influential sire Pulpit. Since her export to Japan, Hymnotic has foaled colts by Horse of the Year Kitasan Black (Jpn) (Black Tide {Jpn}) each of the last two years. B-Yanagawa Bokujo

10th-CKO, ¥19,110,000 ($184k), Allowance, 2yo, 1400mT
MOON BEAD (JPN) (f, 2, American Pharoah–Evening Jewel, by Northern Afleet) overcame a wide trip from the 18 hole to graduate by a half-length going this distance on Niigata debut Oct. 17 (see below) and should enjoy a softer run in this more compact field. Shadai Farm acquired this MGISW dam for $950K at KEENOV in 2016 and the mare foaled a Pioneerof the Nile colt the following spring. She was bred to American Pharoah and was exported before producing this filly in March 2018. Evening Jewel is the dam of a yearling Deep Impact (Jpn) colt and was covered this past season by Duramente (Jpn). B-Shadai Farm