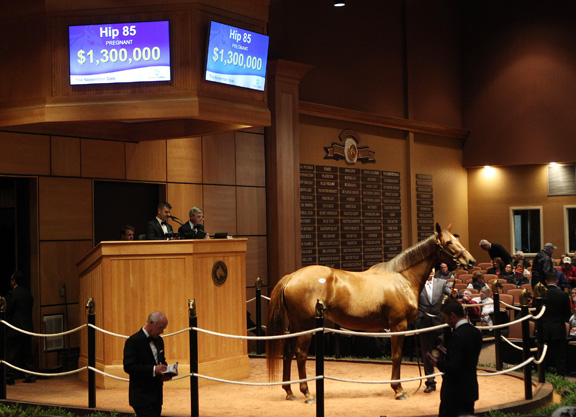 In this continuing series, we take a look ahead at US-bred and/or conceived runners entered for the upcoming weekend at the tracks on the Japan Racing Association circuit, with a focus on pedigree and/or performance in the sales ring. Here are the horses of interest for this Sunday running at Hanshin, Niigata and Nakayama Racecourses, the last of which stages the first colts' Classic of 2021, the G1 Satsuki Sho (Japanese 2000 Guineas) over the metric 10 furlongs:

Sunday, April 18, 2021
1st-NII, ¥9,680,000 ($89k), Maiden, 3yo, 1800m
ALIENOR (JPN) (f, 3, Nyquist–Land Over Sea, by Bellamy Road), a well-beaten 12th in a 1600-meter newcomers' event on the turf at Tokyo last November, switches to the dirt for this second appearance and is bred top and bottom to appreciate the change. From her GI Kentucky Derby-winning sire's first crop, the January foal is out of Paul Reddam's 2016 GII Fair Grounds Oaks winner and GI Longines Kentucky Oaks runner-up who was acquired for $1.3 million with this filly in utero at Fasig-Tipton November in 2017. Land Over Sea is a half-sister to the durable MGSW & GISP War Story (Northern Afleet). B-Shadai Farm

5th-HSN, ¥13,830,000 ($127k), Allowance, 3yo, 1800m
TOP THE BILL (JPN) (f, 3, American Pharoah–Top Decile, by Congrats) has a record of 1-1-1 from four starts on the dirt, having broken her maiden from a near impossible position going this distance two back at Chukyo Jan. 11 (see below, gate 16) ahead of a third when trying winners for the first time over that track and trip 13 days hence. The chestnut is the first foal from her dam, runner-up in the 2014 GI Darley Alcibiades S. and a tough-trip second in the GI Breeders' Cup Juvenile Fillies. Top Decile was sold for $950K with this filly in utero at Keeneland November in 2017. B-Shadai Farm

5th-NKY, ¥13,830,000 ($127k), Allowance, 3yo, 1800m
COSMIC MIND (c, 3, Into Mischief–Mystical Star, by Ghostzapper) opened his account in spectacular fashion, overcoming all sorts of trouble to graduate narrowly over this course and trip Jan. 17 (video, gate 4) and has not disgraced in two runs since, finishing fifth and fourth, respectively, while not beaten far. A $280K KEESEP yearling, the bay is out of the versatile Mystical Star, a Grade II winner on the grass and runner-up in a Polytrack renewal of the GI Juddmonte Spinster S. Remarkably, this colt's breeder is also represented in the same by Bourbon Highball (Curlin), who hails from the same crop of about 18 horses, according to Candy Meadows's Matt Lyons. B-Candy Meadows LLC (KY)