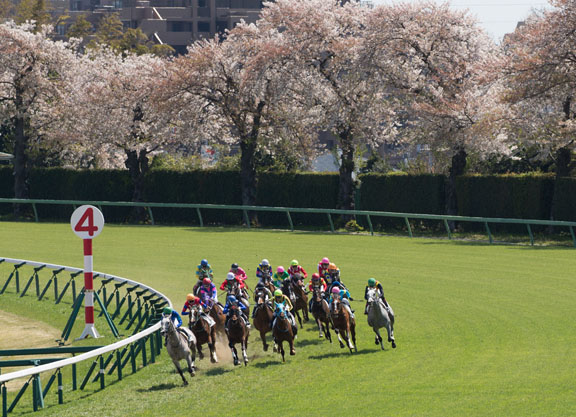 In this continuing series, we take a look ahead at US-bred and/or conceived runners entered for the upcoming weekend at the tracks on the Japan Racing Association circuit, with a focus on pedigree and/or performance in the sales ring. Here are the horses of interest for this weekend running at Hanshin and Nakayama Racecourses, the latter of which plays host to the first leg of the Japanese Triple Crown, Sunday's G1 Satsuki Sho (Japanese 2000 Guineas) over the metric mile and a quarter:

11th-HSN, Arlington Cup-G3, ¥72m ($688k), 3yo, 1600mT
DIEU DU VIN (JPN) (c, 3, Declaration of War–Jealous Cat, by Tapit) stamped himself as one of Japan's leading dirt horses of his generation with a defeat of the talented Danon Pharaoh (Jpn) (American Pharoah) on Oct. 26 before carrying Frankie Dettori to a victory in the Nov. 23 Cattleya Sho (see below, gate 3), the first race on the Japan Road to the Kentucky Derby. The bay transitions to the grass for this group debut and he has the license to handle it, as his dam is a full-sister to former 'TDN Rising Star' Tapicat, winner of the GIII Florida Oaks in 2013. B-Shimokobe Farm

Sunday, April 19, 2020
11th-NKY, Satsuki Sho-G1, ¥210m ($1.95m), 3yo, 2000mT
Owner Katsumi Yoshizawa gave $825K at KEESEP in 2018 for AMERICAN SEED (c, 3, Tapit–Sweet Talker, by Stormin Fever) and the colt has yet to finish outside the top three in his four career starts. A first-out winner over 1800 grassy meters Dec. 8 (see below, gate 5), the March-foaled bay was runner-up in his next two appearances and exits a third in the Listed Wakaba S. going this trip Mar. 21. Sweet Talker, winner of the 2005 GI QE II Challenge Cup and sold to Courtlandt Farm a month later for $1.15 million at KEENOV, is the dam of American Seed's SW/GP full-sister Sweet Tapper and his MGSP half-brother Perregaux (Distorted Humor). B-Courtlandt Farm (KY)